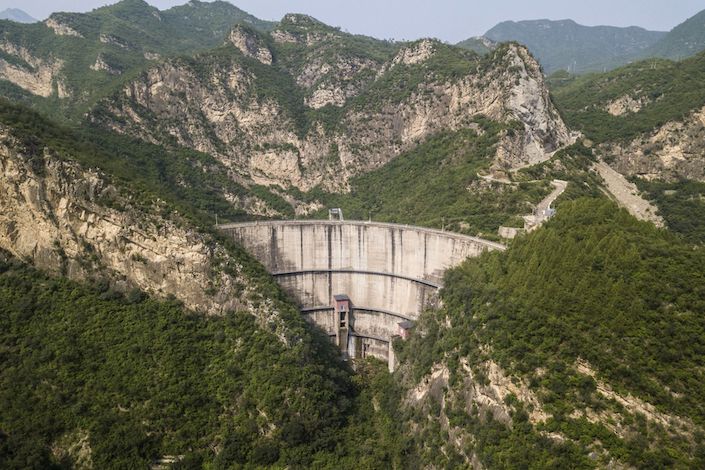 A disused concrete dam in Weizishui village in Beijing

(Bloomberg) — China is planning a major expansion of pumped hydro energy storage over the next decade as it seeks to add stability to its growing fleet of wind and solar power plants.

The country should aim to have 62 gigawatts of storage facilities operating by 2025 and 120 gigawatts by 2030, the National Energy Administration (NEA) said in a plan published online. China has about 32 gigawatts currently, according to BloombergNEF.

China is developing record amounts of wind and solar capacity as part of its drive to top out carbon dioxide emissions by 2030 and reach carbon neutrality by 2060. Pumped hydro can allow clean electricity to be stored by using it to move water uphill when it’s sunny or windy and later letting gravity bring the water back down through turbines.

The world had a total of 158 gigawatts of pumped hydro capacity in 2019, accounting for about 94% of all energy storage, according to the International Hydropower Association.

The technology fits well with China’s wet and mountainous terrain, and the country is home to some of the world’s biggest builders of traditional hydropower, including China Three Gorges Corp.

State Grid Corp. of China, which operates power transmission for 88% of the country, has listed pumped hydro as a key technology. It has 23 gigawatts operating now, with 49 gigawatts more under construction and plans to reach 100 gigawatts by 2030, Chairman Xin Baoan said Thursday in a speech.

The utility is building the world’s biggest pumped-hydro station, the 3.6 gigawatt Fengning plant in Hebei province, with a first phase expected to come online this year before completion in 2023.

Last month, SolarZoom reported that the NEA was seeking comments on a draft of the plan that called for building 300 gigawatts by 2035 for a total investment of 1.8 trillion yuan ($278 billion). The plan the NEA published Thursday doesn’t include cost estimates or a 2035 projection.

The NEA plan said about 421 gigawatts of pumped hydro projects meet all the ecological requirements to be put on a long-term “key projects” list, while it identified an additional 305 gigawatts of projects that don’t meet requirements now but could be added later.