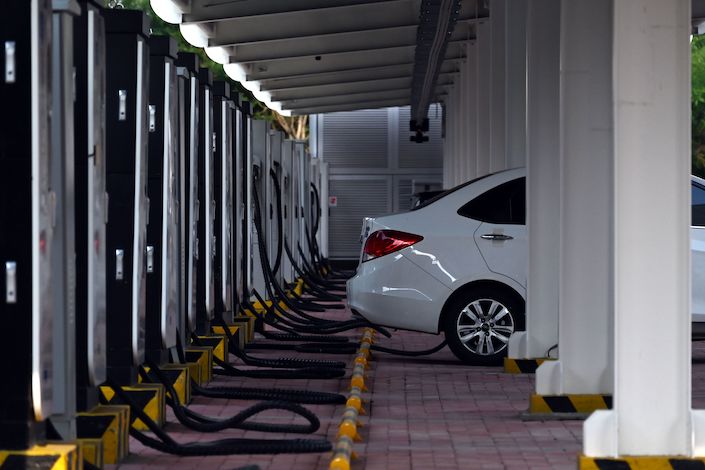 Electric cars at a charging station in Tianjin

(Bloomberg) — China vowed to consolidate the country’s electric vehicle (EV) industry after a decade of nurturing the sector led to the emergence of too many players, some of which are barely viable.

“Looking forward, EV companies should grow bigger and stronger,” Xiao Yaqing, minister for industry and information technology, said Monday at a press conference in Beijing. “We have too many EV firms on the market right now.”

“The firms are mostly small and scattered,” he said. “The role of the market should be fully utilized, and we encourage merger and restructuring efforts in the EV sector to further increase market concentration.”

China, which built its electric-car industry into the world’s biggest, is putting a new focus on consolidating its 300 EV makers. The government is drafting measures to rein in overcapacity and channel resources to key production hubs, Bloomberg News reported last week, citing people familiar with the matter.

Regulators are considering setting a minimum production capacity utilization rate for the industry, and provinces that aren’t meeting it won’t be allowed to approve new projects until surplus capacity comes online, Bloomberg reported.

The average production capacity utilization for automakers in China overall was only about 53% last year, according to calculations based on a Jiangsu province submission to the National Development and Reform Commission earlier this year.

“This has been a liability for the local players since the beginning: too many companies dividing the market, which fragments the supply chains for the core components,” said Bill Russo, founder and chief executive officer of Shanghai-based advisory firm Automobility Ltd. “It’s imperative to concentrate on a few key manufacturers and suppliers of the ingredients of an EV.”

China is shaking up industries from tutoring to property to big tech in President Xi Jinping’s quest to remodel the nation’s economy and society.

The rapid growth of China’s EV market has been spurred by government subsidies to encourage consumers to switch to cleaner automobiles. Total central government subsidies for new-energy vehicle purchases reached 33 billion yuan ($5.1 billion) in the five years through 2020, according to Ministry for Industry and Information Technology data.

In response, provincial authorities offered tax breaks and other incentives for EV manufactures to set up shop, leading to overcapacity. Jiangsu province, north of Shanghai, is now home to around 30 automakers, several of them bankrupt.