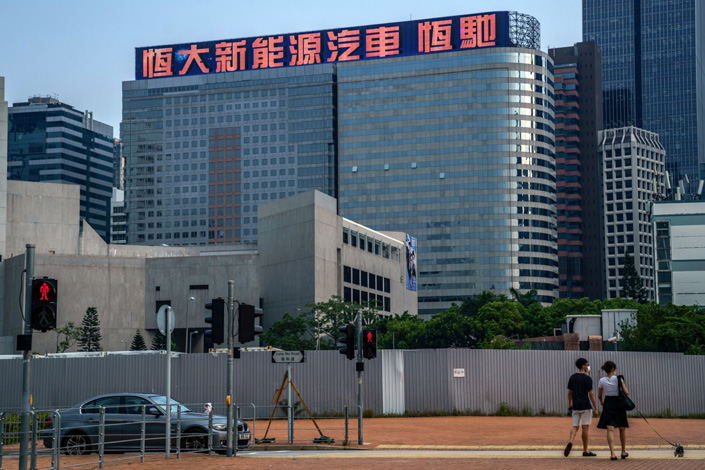 (Bloomberg) —China Evergrande Group said it hired financial advisers to explore “all feasible solutions” to ease its cash crunch, warning there’s no guarantee the company will meet its financial obligations.

The firm has engaged Houlihan Lokey and Admiralty Harbour Capital as joint FAs to assess the firm’s capital structure, Evergrande said in a filing to the Hong Kong stock exchange Tuesday. The company said if it’s unable to repay debts on time or get creditors to agree to extensions or alternative arrangements, it may lead to cross-default.

The company has also failed to make “material progress” on the sale of stakes in China Evergrande New Energy Vehicle Group Ltd. and Evergrande Property Services Group Ltd., while the sale of its office building in Hong Kong hasn’t been completed within the expected timetable, it said.

Evergrande is facing mounting protests by homebuyers, retail investors and even its own employees as the indebted developer struggles to meet its obligations. Police descended on Evergrande’s Shenzhen headquarters late Monday after dozens of people gathered to demand repayments on overdue wealth management products. Protesters numbered in the hundreds on Sunday, Caixin reported.

“It looks like they are working on debt restructuring after no concrete results on asset disposals, and the first task is to stabilize the holders of wealth management products which could be a social issue,” said Daniel Fan, a credit analyst at Bloomberg Intelligence. “It seems the developer is working on rescheduling pretty much all onshore debt, and the next step is to do the same for offshore investors.

Houlihan Lokey has one of the largest financial restructuring operations globally, having advised on some 1,400 cases with more than $3 trillion in debt claims since 1988, according to its website. Its largest case by assets was Lehman Brothers Holdings Inc.

Two units failed to discharge their guarantee obligations on time for wealth management products worth 934 million yuan ($145 million), the company said, adding it’s in talks with issuers and investors on a repayment arrangement.

Evergrande expects “significant continuing decline” in contract sales in September, resulting in “continuous deterioration” of cash collection, according to the statement. That will place “tremendous pressure” on the group’s cashflow and liquidity, it said.

In a statement late Monday, Evergrande said rumors that it will go bankrupt are not true. While the developer is facing unprecedented difficulties, it is firmly fulfilling its responsibilities and is doing everything possible to restore normal operations and protect the legitimate rights and interests of customers, according to the statement on its website. The company didn’t comment on the protests.