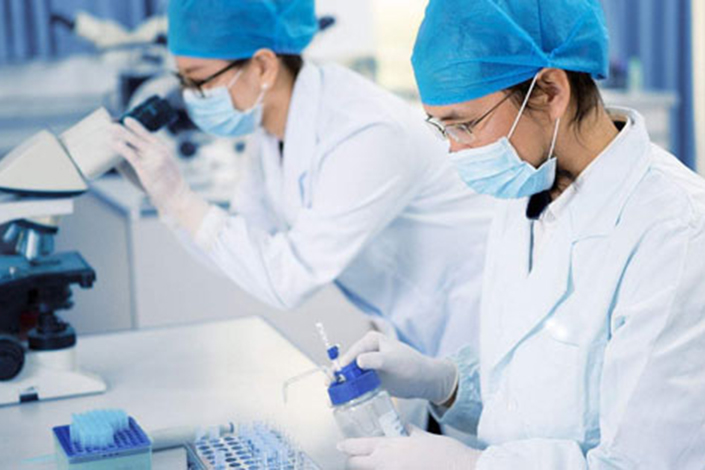 AIM manufactures and markets eight vaccines used against six of the most common diseases in China including rabies, hepatitis B, mumps and meningococcal diseases. Photo: aimbio.com

AIM Vaccine Co. Ltd., which says it is developing four jabs against Covid-19, has refiled to list in Hong Kong two months after its initial application was rejected, with regulators raising concerns about abnormalities in the company’s capital raising activities and shareholder structure.

The Beijing-based company, which says it is China’s second-largest vaccine firm by market share, refiled its application Sunday after the bourse on July 15 placed its submission on the “returned” list. This is generally understood to mean its bid was rejected because it failed to meet regulatory requirements.

The Hong Kong exchange did not provide reasons for its rejection in July. The company’s new application did not say how much money it aims to raise or how many shares will be issued.

However, at the time the first submission was rejected the China Securities Regulatory Commission (CSRC) chimed in on the matter, raising questions about the company’s multiple changes in its name and address, numerous capital increases within the prior 12 months and the relationship among three major shareholders surnamed Zhou, according to a notice (link in Chinese) statement.

The company has changed its name at least five times in recent years, and increased its registered capital four times within the past 12 months, according to Caixin data and publicly available information.

AIM manufactures and markets eight vaccines used against six of the most common diseases in China including rabies, hepatitis B, mumps and meningococcal diseases.

Its human rabies vaccine is its most popular product, accounting for 65.5% of total revenue in 2020, the same year it ranked as the second-largest supplier of the rabies vaccine in the world, according to the company’s listing documents.

In May, the company acquired a 50.15% interest in Liverna Therapeutics Inc., one of three domestic companies with an mRNA vaccine approved for human trials, which is currently in phase one of clinical trials.

The acquisition was aimed at accelerating local development of mRNA vaccine technology. Despite existing mRNA vaccines developed in the U.S. and Europe being shown to be extremely effective at preventing serious illness and death from Covid-19, and being widely used outside China, none has yet been approved for manufacture or use on the Chinese mainland.

MRNA vaccines deliver genetic code from the virus to host cells, giving them what are essentially instructions to make copies of spike proteins, which prompt an immune response. This differs from traditional vaccines, which induce an immune response by injecting an inactivated — a weakened or dead — form of the virus into people’s bodies.

China has rolled out a nationwide immunization program using inactivated vaccines made by Sinovac Biotech Ltd. and Sinopharm, although doubts have been raised about the level of protection they offer compared to jabs developed in some other countries.

The two most widely used mRNA vaccines around the world are made by the U.S.-German collaboration Pfizer-BioNTech and U.S.-based Moderna Inc.

AIM is in the race to become the first to get approval for the mRNA vaccine in China and is up against domestic rivals such as Suzhou Abogen Biosciences and Walvax Biotechnology Co Ltd. (300142.SZ), who are developing an mRNA Covid-19 vaccine with the PLA Academy of Military Science.

The development of Covid-19 vaccine candidates has boosted AIM’s research and development costs 202% to 139.6 million yuan ($21.7 million) in the first half of 2021, compared to the same period last year.

It currently projects the mRNA and inactivated virus vaccines will be the first to receive approval and hit the market in the fourth quarter of 2022, with the other two sometime in 2023.

But it has already missed a previous target. In a press release (link in Chinese) in July of last year, the company said it would strive to be producing an inactivated Covid-19 vaccine by the first half of this year.

AIM has generated healthy profits in recent years, rising by a compound annual rate of almost 100% between 2018 and 2020, when it reported net earnings of 400 million yuan, according to its filing documents.