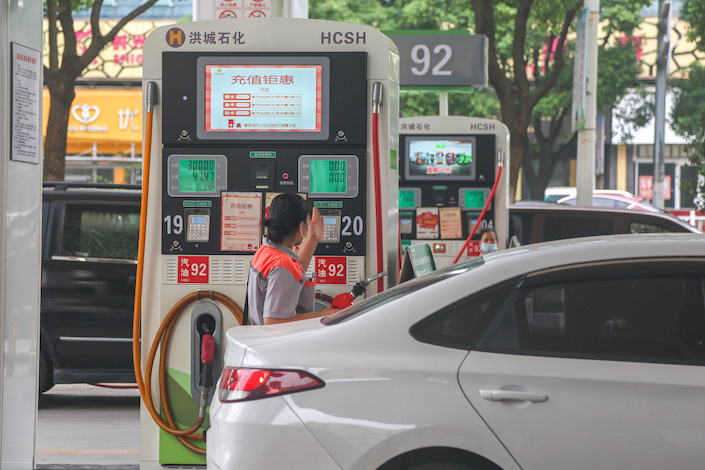 A gas station in Nanchang.

China will auction off 7.38 million barrels of crude oil from strategic reserve Sept. 24. The unprecedented move by the world’s top oil importer is an attempt to intervene in the global oil market to push down prices, which rose roughly 40% this year. Besides oil, China faces surging costs for coal and natural gas.

Chifeng Jilong Gold Mining signed a strategic investment agreement via a subsidiary with Australian mining services provider MetalsTech Ltd. to invest A$2 million ($1.46 million) in exploration of the Sturec Underground Gold Mine in Slovakia. It’s another move by Chifeng to invest overseas. It planned to buy the Bibiani mine in Ghana from Australian gold miner Resolute last year, but the acquisition was canceled when the mining lease was terminated.

Chinese aluminum prices climbed more than 50% since the start of this year to a 15-year high of 24,000 yuan ($3,720) per ton. Aluminum is extensively used in lithium-ion batteries, and demand is surging amid a boom in the electric vehicle industry. Production is affected by tightening output limits in China, which reinforced worries about an aluminum shortage. Last week, China’s southwest Yunnan province, a major aluminum producer, told local smelters to slash output to reduce greenhouse gas emissions.

Leading lithium producer Tianqi Lithium Corp. resumed a three-year-old plan to sell shares in Hong Kong. The company plans to issue stock equal to as much as 20% of its total issued share capital and use the funds to increase capacity, cover operating costs and pay debt. Tianqi Lithium planned to raise as much as $1 billion on the Hong Kong Stock Exchange three years ago but called off the listing because of a lower-than-expected valuation.

China reported coal production of 340 million tons in August, swinging from a year-on-year drop of 3.3% in July to a 0.8% rise, data from National Bureau of Statistics shows. Coal imports soared 35.8% to 28.05 million tons.