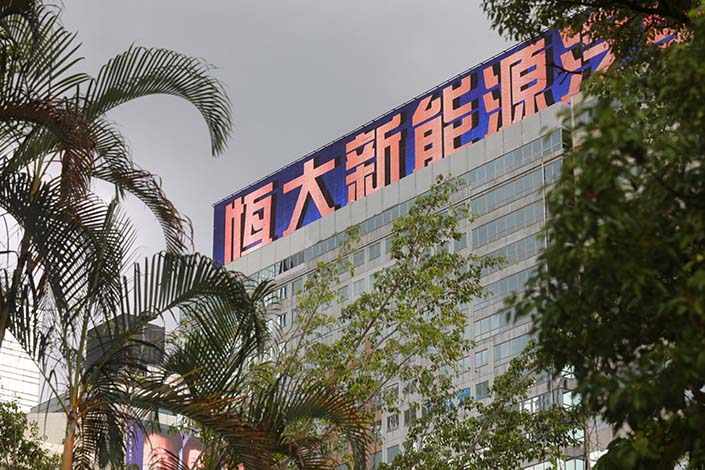 The China Evergrande Centre in the Wan Chai area of Hong Kong on Monday. Photo: Bloomberg

(Bloomberg) — China Evergrande Group slid deeper in equity and credit markets Tuesday, fueling concerns about broader contagion after S&P Global Ratings said the developer is on the brink of default.

The distressed developer’s shares in Hong Kong dropped as much as 7% after closing Monday at the lowest in about a decade. Its 8.25% dollar bond due 2022 fell 0.3 cent to 24.9 cents, leaving it down some 75% since late May, according to prices compiled by Bloomberg. The junk-rated company is the biggest issuer of high-yield notes in Asia.

“We believe Beijing would only be compelled to step in if there is a far-reaching contagion causing multiple major developers to fail and posing systemic risks to the economy,” according to an S&P report dated Sept. 20. “Evergrande failing alone would unlikely result in such a scenario.”

Evergrande Chairman Hui Ka Yan told staff that he firmly believes the company will step out of the darkest moment soon, the Securities Times reported, citing a company letter. The developer will accelerate a full-on resumption of construction to ensure handing over of buildings, it said. An Evergrande spokesperson confirmed the authenticity of the letter.

Investors are weighing policy tightening in China that’s hit the property sector in the past year through the “three red lines” effort to restrain debt growth. Debate has spread about how much the government may help as markets reel, after it took months for plans to emerge for China Huarong Asset Management Co. Ltd., one of the country’s major managers of distressed assets.

Evergrande’s saga is coming to a head at a time when liquidity is low amid public holidays in China and other countries in Asia. Chinese authorities previously told major lenders not to expect repayment of interest on bank loans due this week. Interest also comes due Thursday on two of the developer’s bonds.

Here are views on what’s next for Evergrande:

Beijing will take action to prevent the Evergrande crisis from becoming a “Lehman Moment” for the nation, but some banks may become victims, Judy Zhang and other analysts wrote in a note. “Policy makers will likely uphold the bottom line of preventing systematic risk to buy time for resolving the debt risk, and push forward marginal easing for the overall credit environment.”

Ajay Rajadhyaksha, head of macro research, and Jian Chang, chief China economist, and others at Barclays also said in a note that a possible Evergrande default would be far from being China’s Lehman moment, even as it could be a drag on the property sector. “We don’t believe the business model of Chinese property firms is on the whole broken,” they wrote. “Evergrande is in worse shape than most, both in terms of leverage and its business model, as seen by it breaching all three ‘red lines.’”

“While we think the government doesn’t want to be seen as engineering a bail out, we expect it to step in to conduct a managed restructuring of the firm’s debt to prevent disorderly debt recovery efforts, reduce systemic risk, and contain economic disruption,” lead economist Tommy Wu and head of Asia economics Louis Kuijs wrote in a note. However, financial conditions for the broader property sector will remain tense for some time, with some spillover into wider financial sector stress, they said.