Blog: What History and Economics Can Teach About Making a Moral Society 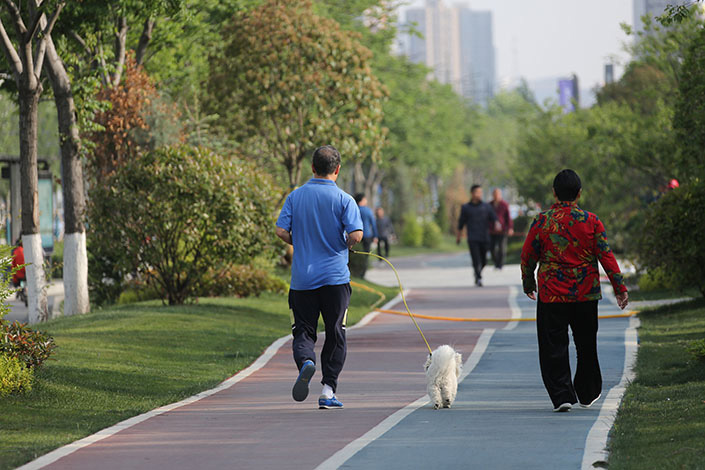 A pedestrian walks a dog on May 2 at a park of Zhengzhou, Central China’s Henan province. Photo: VCG

How can one encourage a society where people do things that benefit not just themselves but also others? How can we eliminate bad behavior and encourage better ones by institutionalizing various methods of rewarding good behavior? Chinese economics professor Li Jingkui looks at examples from Chinese modern life and history to find the answers.

Recently, there was a major dispute involving a dog and some people.

The incident happened on July 2 at a residential estate in Bengbu, East China’s Anhui province. A self-proclaimed lady boss managing local Huizhou banquets had an altercation with a resident. The former’s off-leash dog almost bit the latter’s daughter, causing much trauma and drama in the process.

Looking at videos circulated online, the dog was not small. In fact, it was medium-sized and rather aggressive. The lady boss could be said to be in the wrong for not putting her dog on a leash. But that was just the beginning. After their scuffle, the lady boss went home while the resident called the police.   What really gained this lady boss notoriety on the internet was her response when the police stepped in to mediate: “How dare you touch my dog? If you dare lay a finger on it, I will kill your child! Isn’t this all about money? Money is what ’laozi’ has. (Laozi ia way of referring to oneself in Chinese, meaning "the more senior and superior one talking to you.” It is usually used in arguments.)

“Laozi organized a few Huizhou banquets and managed them all by myself. Laozi has money and I’m not afraid of you. I can even pay you tens of millions if you wish,” the woman said.

In today’s information age, I don’t know if positive events make the news, but negative events certainly spread far and wide with lightning speed. As soon as the video was uploaded, the haughty lady boss instantly became one of the top searches on Weibo.

Going by the letter of the law

Just a day later, on July 3, the lady boss’s company, Anhui Bengbu Huizhou Banquet Catering Co., Ltd., quickly distanced itself from the woman and subsequently terminated her employment. Soon after, the woman’s husband made an apology.

On the afternoon of July 5, a branch of the Anhui Bengbu Public Security Bureau posted this statement: “The local public security bureau has administratively detained the two female parties who caused the dispute. The lady boss was detained for seven days, while the girl’s mother — who started the fight first — was detained for three days.” And this was how the incident was resolved.

In China, the law holds dog owners liable for any harm caused by their off-leash dogs. This is clearly stipulated in the Civil Code of the People’s Republic of China (中华人民共和国民法典), China’s first civil code and also the first set of laws to be termed a legal code. This code of law was passed on May 28, 2020 and took effect on January 1, 2021.

Article 1245 of this legal code states: “Where a domesticated animal causes damage to another person, the keeper or custodian of the animal shall bear tort liability, provided that his liability may be mitigated or eliminated if it can be proven that the damage is caused by the infringed person intentionally or by gross negligence.”

Going by this, the lady boss has indeed violated relevant regulations by walking her dog off-leash and should be detained. Also, based on what she said following the incident, we can be certain that her actions were deliberate. A seven-day detention seems very reasonable.

By walking her dog off-leash, the lady boss scared the resident’s daughter — this is the harm she brought to the residents of the residential area. But not only did she fail to offer compensation, she did not even apologize for her behavior — a typical example of a negative externality.

On the other hand, following the examples of comrade Lei Feng (a soldier in the People’s Liberation Army known for his selflessness and devotion to Mao Zedong), doing good discreetly and without claiming credit is a positive externality. Beautifying one’s garden, or ensuring that one’s desk is neat and tidy at the office may bring cheer to others but one may not be rewarded or compensated for these kinds of behavior. Hence, these are also examples of positive externalities.

In society, the costs of positive externalities are borne by the actor alone while the benefits are enjoyed by everyone, hence we want more of such behavior. On the other hand, the benefits of negative externalities are enjoyed by the actor alone while the costs are borne by everyone, so we hate such behavior.

Most of our laws deal with such externalities. The Criminal Law of the People’s Republic of China deals with negative externalities that do greater damage. Additionally, the law also recognizes, and makes clear, the criteria for the recognition of good deeds and courageous acts, and safeguards the rights and interests of good people. By protecting and encouraging positive externalities, good deeds become more meaningful and valuable.

However, when an incident escalates to the point that it needs legal recourse, it has often spiraled out of control. In fact, as externalities are everywhere in our daily lives, society has developed various methods to internalize them. Those who commit negative externality behavior would be made to bear costs that are commensurate with their gains, while those who exhibit positive externality behavior are offered benefits that “compensate” the costs that they have borne.

For example, when we praise the owner of a beautiful and tidy garden, it would make him or her feel good about themselves. This is in fact a reward for the owner. We would also avoid colleagues with messy work areas, and would certainly shun someone who does not bathe often and perspires a lot. By exhibiting these social rejection behaviors, we are actually punishing such colleagues to some extent.

Scottish economist Adam Smith knew that humans are naturally selfish and self-serving. In his book “An Inquiry into the Nature and Causes of the Wealth of Nations,” based on human nature, he argued that an individual’s pursuit of self-interest will bring about unexpected benefits to society.

But in his other work “The Theory of Moral Sentiments,” he emphasized that humans are endowed with empathy towards others and value the role of an “impartial spectator” within them as the ultimate judge of morality. The example of an incident between Chinese monk Hongyi (Li Shutong) and his good friend Xia Mianzun helps illustrate this.

Xia and Li were once teachers at the Zhejiang Official Secondary Normal School, where Xia was also the manager of the student dormitories. Once, a student reported a theft at the dormitory and everyone suspected a certain culprit but could not find evidence.

When Xia asked Li for help, the latter said: “Are you willing to commit suicide? You could put up an announcement urging the thief to turn himself in quickly. The notice will also state that if no one comes forward at the end of three days, the dormitory manager will be deemed unfit for his role and will kill himself to uphold the sanctity of education.”

Li was not joking. He said this announcement must be taken seriously — Xia must commit suicide if no one came forward after three days; otherwise, the announcement would be ineffective.

Xia chose to go on a hunger strike instead. Luckily, very soon, the thief came crying and confessed to his misdeed. Such is the power of empathy!

But human nature is pretty complex, as Mencius said in 离娄上 (Li Lou part one) of Mencius (孟子): “Virtue alone is not sufficient for the exercise of government; laws alone cannot bring themselves into practice.” It is sometimes difficult to implement order and good governance across a massive society made up of strangers by merely relying on one’s conscience and the “impartial spectator”. But strict laws alone will not work as well, because the cost of implementing the law is too high.

So, are there other ways for humans to solve externality problems? Certainly, and that is by signing contracts to internalize externalities. A famous example of this would be professor Steven Cheung’s (张五常) research on the contract between beekeepers and farmers.

However, the farmer and beekeeper are unable to trade, so neither of them can receive the benefits of positive externalities. Hence, the government would have to subsidize both the farmer and the beekeeper to encourage such behavior.

In the spring of 1972, Cheung spent three months investigating the pricing and contractual agreements of the beekeeping industry in the American state of Washington. Back then, there were about 60 beekeepers in Washington and they each owned 100 colonies or more of bees. In the peak season, the state’s grand total of colonies was about 90,000.

Cheung’s research had a sample size of nine beekeepers and approximately 10,000 spring colonies. He discovered that contractual arrangements have long existed between farmers and beekeepers. In fact, there is a price for the bees’ pollen and a nectar-collecting service. And the accuracy of its price positioning is no less than other market items.

Human society has used different ways to solve externality problems — appealing to people’s morality and conscience as well as their powers of introspection, making use of legal means to enforce law and order, and signing contracts to institutionalize ways for internalizing externalities. The right way would vary according to situations, constraints and the value of the transaction. There is no such thing as “one size fits all.” With the internet, it is even possible that the weight of online public opinion can play a role in social governance if properly used. This could be one of the constraints of solving today’s externality problems in this new era.