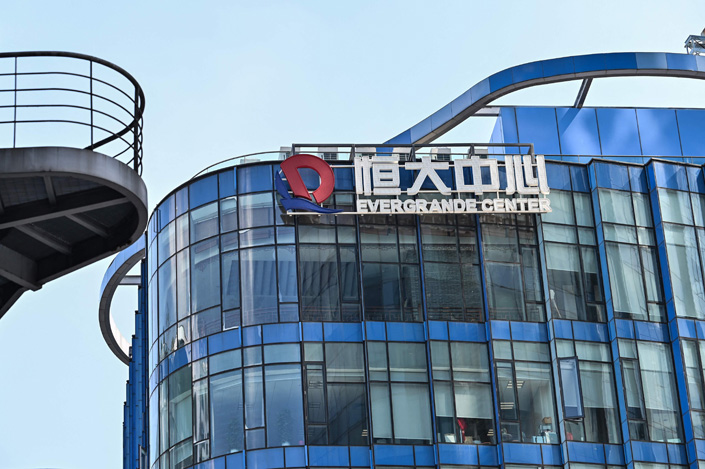 The Evergrande Center in Shanghai on Wednesday. Photo: VCG

(Bloomberg) — The lack of any announcement from China Evergrande Group concerning an $83.5 million interest payment that was due Thursday on a dollar bond adds to the uncertainty surrounding the developer’s struggles.

Asia’s largest issuer of junk-rated dollar bonds has so far made no stock exchange filing or public announcement about the coupon. Two holders of the note, which matures in March, had told Bloomberg they hadn’t received payment as of 5 p.m.

Evergrande, the world’s most indebted developer, has a 30-day grace period to make the payment before any event of default could be declared. Investors have been pricing in a significant chance of a missed payment or getting a small fraction of face value in any potential restructuring.

Earlier in the week and concerning a separate interest payment on a local bond, Evergrande had issued a vague statement about “resolving” that 232 million yuan ($36 million) coupon. But that filing didn’t specify how much interest would be paid or when.

Evergrande’s shares and dollar bonds jumped on Thursday as trading resumed in Hong Kong after a holiday, helping fuel broader gains for Chinese property firm after recent sharp declines. But a continued information vacuum on the dollar note interest could raise questions about how sustainable such increases may be.

The situation also harkens back to April and another major distressed debt case from China. Then, a lack of information about the situation concerning China Huarong Asset Management Co. Ltd. sent that firm’s dollar bonds plunging and cast a pall over the broader market.

Like with Huarong, a dominant question for Evergrande has been what role the government may have in any overhaul of the company. It took nearly five months after Huarong said it was unable to release 2020 results before a state-led bailout of the government-controlled distressed-asset manager was unveiled.

Financial regulators have told Evergrande to focus on completing unfinished properties and repaying individual investors while avoiding a near-term default on dollar bonds, according to a person familiar with the matter. There’s no indication that officials offered financial support to the company.