Opinion: Why I Didn’t Invest in Evergrande — Deception, Leverage and Cycles 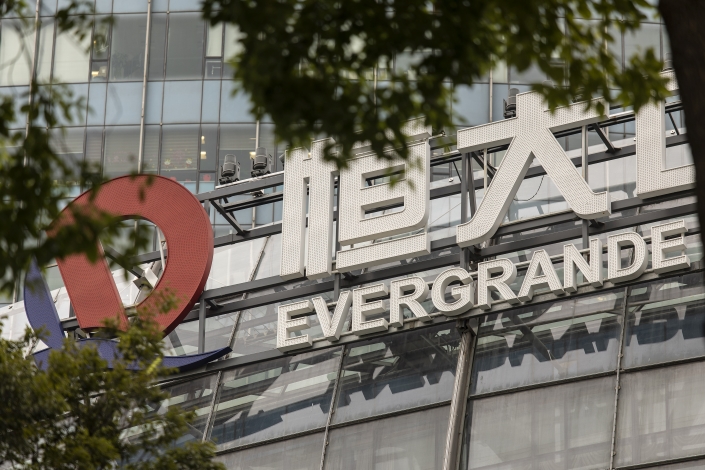 A China Evergrande Group sign atop the Evergrande Center in Shanghai on Sept. 15. Photo: VCG

As an investor, I am convinced of the monetary nature of land in China, and have held many high-yield heavyweight bonds of real estate companies. But I never ventured into buying bonds issued by the Evergrande. Why?

There are three reasons for this. The issuer’s history of deception. The company’s constant craving for the limelight, which can blind it to its problems. And finally, enterprises that operate in an exaggerated way tend to have a low bottom line.

From an investment point of view, it was a tough choice to resist getting involved in a once halo-shrouded enterprise such as Evergrande. In theory, as long as the bond is cleared before any problem arises, and as long as you can off load on time, it is a good investment. There are bound to be such winners in the market. However, these investment operations should not be encouraged.

The myth of too-big-to-fail

Since the 2008 crisis, many Chinese enterprises learned the trick of being “too big to fail.” They realized that if they made their corporate debt heavy enough to pose a systemic risk, their own debt would become a national problem.

For example, as many joke about it in the market, a debt of 2 million yuan troubles the borrower itself, while a debt of 20 billion yuan worries the bank, but a debt of 2 trillion yuan presents a problem that has to be solved by the national authorities.

It is usually difficult for enterprises to expand their financing scale, but Evergrande was a leader in this regard.

Evergrande skilfully leveraged its abundant collateral and high-profit margins in the real estate industry, and was familiar with the tricks, as well as the mentality, of financial institutions. Whether through its AAA rating that helped Evergrande to gain the recognition of financial institutions or the investment in soccer teams that allowed it to make a good public impression, the real estate giant always seemed to be able to control the narrative with the public and financial institutions, and always picked the perfect moment. It was like a player in a poker tournament who could accurately know the other players’ hands and foresee how they would interpret his behavior. And the only recourse for the other players was to refuse to play with him — like me. In business, it is best to avoid getting involved with enterprises that are too deceptive. However, the credit evaluation system compiled by general financial institutions does not include the ability to control the underhanded tactics.

Both companies and financial institutions have strong incentives to expand their scales. But not every company can make it. It takes extraordinary financing ability for a private enterprise to develop into a company with systemic risk, like Evergrande.

The inevitability of cycles

Surviving a cycle is always easier said than done.

There is a kind of enterprise that seeks make sales miracles by pressing employees. If one year is too long for performance assessment, then three months; if three months is still too long, then one month. They pay no attention to future development. Such enterprises can indeed create excellent performance in the rising stage of the industry cycle and even avoid risks in the early stage of their outbreak, leaving people under the impression that “bigger ships sail more smoothly.”

However, when cyclical changes happen, large enterprises usually don’t have enough space to transfer or adapt.

Both the real estate and finance industries are cyclical. If house prices rise and higher profits are made, they can make high leverage with little risk. But if house prices do not rise, then they can only resort to off-balance-sheet financing to keep the show going, and high financing costs immediately become a heavy burden. For all financial institutions, the most effective risk control means is always to “mortgage houses and land.” Therefore, whether house prices rise or not is crucial for deciding risks of real estate borrowers. If house prices do not rise, and no one buys houses, even with the best risk control measures, banks still can’t avoid bad debts from accumulating.

The cycle of the finance and real estate industries depends on housing prices. And housing prices in China have not seen an inflection point yet — the only direction has been up.

The blind faith that housing price never fails is the biggest source of risks and the fundamental reason why some people maximize their debts. When financing costs are constantly rising and financing is becoming increasingly difficult, the bottom line for financing will continually drop. This only comes to an end, likely a messy one, if someone forcibly presses the stop button.

The collapse of a corporation with debts of 2 trillion yuan, like Evergrande, will undoubtedly leave a major impact on the entire industry and China’s financial institutions.

Isn’t this the inevitable part of the cycle? After going up for so long, it will finally going down.

History tells us that every cycle ends with the collapse of a symbolic company. Evergrande is certainly large enough to be symbolic. And once the old cycle with the real estate ends, maybe a new cycle with technology will begin.

How much debt does Evergrande have? How about its off-balance-sheet financing? How many of its mortgaged properties have been sold? These are key questions.

Among its creditors, the most vulnerable are individual investors and house buyers. If Evergrande’s debts are not all frozen, and “off-site” negotiations are allowed to continue, the vulnerable groups will probably become the final payers of its possible insolvency.

Only by clarifying the total debt as soon as possible can all creditors be treated fairly. The regulators should take the responsibility to stabilize its finances and handle its debts fairly, rather than allow powerful creditors and debtors to negotiate privately and be repaid first.

As Evergrande’s own management has lost the trust of its investors, only the intervention of public power can maintain market fairness and social credibility. If handled well, it could even be an opportunity to set up a model in dealing with debt and set the financial market on a healthy trajectory.

The final solution to Evergrande’s debt problem can only be underpinned by a credible and comprehensive accounting of its assets and liabilities. The later the debt freezing is conducted, the less fair and credible the settlement will be, and the more likely it is to raise public controversy. This situation allows for no delay of public intervention.

Zhuo Yi is a seasoned investor based in China.