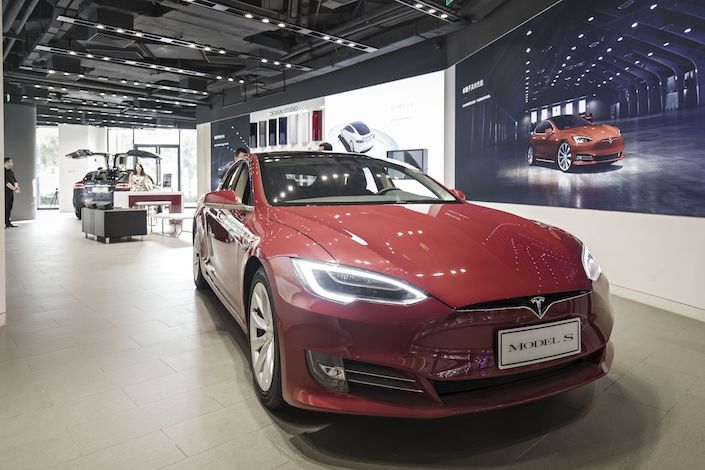 (Bloomberg) — A Chinese driver has successfully sued Tesla Inc. for fraud over his purchase of a second-hand Model S, adding to a run of setbacks for Elon Musk’s electric-car pioneer in one of its most important markets.

A Beijing court found Tesla had misrepresented the condition of the car bought by Han Chao for 379,700 yuan ($58,700) on the automaker’s official used-car platform, according to a copy of the verdict Han posted to his Weibo account. The car was found to have undergone major repairs following an earlier accident, with the court dismissing Tesla’s defense that signs of welding indicated no “structural change.”

Tesla was ordered to refund the cost of the car and pay damages of three times the purchase price — raising the total payout to more than 1.5 million yuan, according to the text of the court ruling Han posted. It’s the first time Palo Alto, California-based Tesla has been hit with such a large penalty in China, local media outlet Caijing reported. Calls to the ruling court, Beijing No. 2 Intermediate People’s Court, went unanswered. Tesla shares fell 0.6% to $776.84 as of 9:42 a.m. in New York.

While Tesla has won legions of loyal fans around the world, in China it has also tangled with several vocal disgruntled customers, who have used social media campaigns to rally support. In the most high-profile case, a female customer clambered atop a Tesla exhibit at April’s Shanghai auto show in a protest that quickly went viral.

The run of bad publicity, along with increased regulatory scrutiny of safety, security, and customer service issues, ended Tesla’s honeymoon in China, where it is the only foreign automaker allowed to wholly own its local operation. China, the world’s biggest EV market, is key to Musk’s global ambitions and to Tesla’s road to sustained profitability.

“The verdict can be regarded as a milestone in consumer rights protections against big companies,” said Zhang Xiaoling, a partner at Beijing-based Haodong Law Firm. “The case may boost the confidence of consumers facing a similar situation and probably will bring more followers,” she said. Zhang specializes in consumer-rights law and is running another case against Tencent Holdings Ltd. that will be heard in November.

Han has been a constant thorn in Tesla’s side since launching his suit, using his Weibo account to provide a running commentary on his case and publicize other grievances with the EV maker, including a Model X owner who also successfully sued for fraud after his electric motor didn’t match his vehicle registration. That driver won a refund and further damages equal to the purchase price.

Indeed, the dispute between Han and Tesla has now descended into a legal tit-for-tat. Tesla is suing Han for damaging courtesy cars and for slander, after he called the automaker a “hooligan company” and accused it of lying to the court on his Weibo account. The automaker has also said it will appeal the fraud ruling.

“We look forward to and believe that the court will finally adjudicate in accordance with the law,” Tesla’s legal team posted on the company’s official account in response to a local media outlet’s Weibo post. Tesla’s China office provided no further comment beyond the posts.

In return, Han is suing Tesla for defamation; Han claimed Tesla has portrayed him as a behind-the-scenes organizer of the Shanghai auto show protest. While he has been in touch with the woman, he says he had no role in the protest. He says Tesla is seeking more than 5.85 million yuan in damages from him and the automaker requested the court freeze his assets.

Han, who declined to be interviewed, said on Weibo that he fought the fraud case for 755 days.