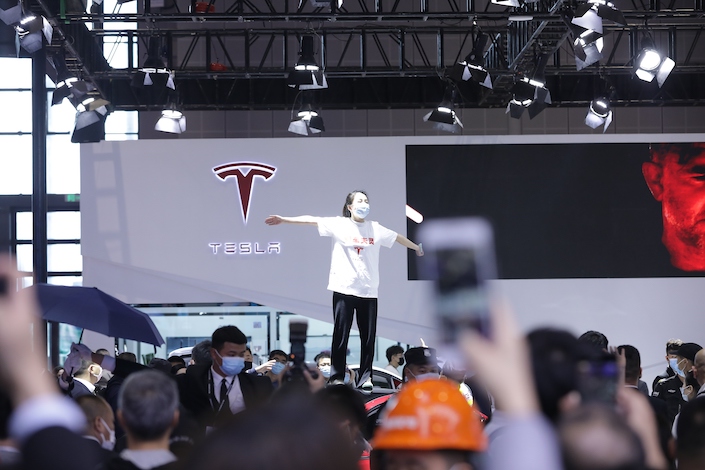 A woman climbs atop a Tesla display vehicle at the Shanghai Auto Show Monday shouting that her car’s brakes failed.

Tesla Inc. agreed under pressure from regulators to share vehicle data with a customer after the customer’s protest atop a Tesla car at the Shanghai auto show went viral on social media.

Zhang Yazhou from Central China’s Henan province carried out the protest Monday citing a crash in February involving a Tesla Model 3 driven by her father. She argued that the crash was caused by brake malfunction, but Tesla said the driver was speeding and didn’t keep a safe distance from the vehicle ahead.

China’s State Administration for Market Regulation said Wednesday that it instructed regulators in Henan province and Shanghai to protect consumers’ rights in accordance with the law. On the same day, the market regulator of Zhengzhou, the capital of Henan, ordered Tesla’s Zhengzhou branch to unconditionally provide the car owner with complete driving data during the half hour before the crash.

Local media reported that Tesla emailed Zhang the vehicle’s driving data over the minute before the crash and provided a text description for the full 30 minutes of data. It was a rare case in which regulators forced the American electric car giant to cough up data logs, though Tesla has been involved in multiple disputes with customers. There have been several incidents in China in which Tesla drivers lost control but Tesla maintained vehicle data showed no abnormality in the vehicles and declined to share data with car owners.

Without regulators’ involvement, vehicle owners have no legal support for obtaining driving data from carmakers, said He Shanshan, director of the autonomous driving law and policy center at the Zhilian Chuxing Research Institute. Regulations should be established to allow access to such data by public authorities and independent review bodies to resolve disputes more efficiently, He said.

The ownership of vehicle driving data is not clearly defined in China or the United States, He said. Existing laws give car owners the right of control over data but not ownership, and in practice, the data is usually controlled by carmakers, He said.

According to the local media report, Tesla’s data showed that the driver of the Zhang vehicle stepped on the brakes more than 40 times in the half-hour before the crash, and at multiple points the vehicle was driving at more than 100 kilometers per hour (kph). Just before the crash, the car was moving at 118.5 kph and slowed to 48.5 kph after the brakes were applied, according to the data.

Tesla and Zhang have argued over whether the car was speeding or whether the braking system failed. Tesla said its position was based on vehicle data, which Zhang alleged was tampered with.

At the auto show Monday, Zhang climbed on top of one of Tesla’s display vehicles shouting that her car’s brakes failed. The incident was captured by scores of onlookers who then uploaded the video to social media, where it went viral. After initially pushing back against the woman’s claims Monday, Tesla apologized to Chinese consumers for not addressing the car owner’s complaints in a timely way.

Tesla’s troubles in China overlap with new questions in the U.S. about the safety of the company's partially automated driving system. In Houston over the weekend, a Tesla Model S slammed into a tree and killed one man in the front passenger seat and another in the back seat with no one apparently behind the wheel.