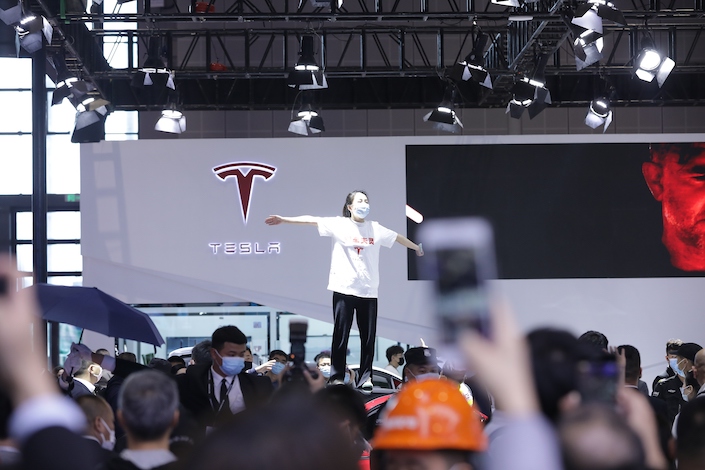 A woman climbed onto a red Model 3 at Tesla’s booth in the Shanghai Auto Show Monday, wearing a T-shirt reading “Brakes Lost Control” in Chinese.

Shanghai police detained a woman for “disturbing public order” after she climbed atop a Tesla car at the start of the city’s biannual auto show Monday to protest what she said were safety issues with the vehicles.

“Tesla brakes fail,” shouted Zhang Yazhou, who climbed onto a red Model 3 in Tesla Inc’s booth at Shanghai Auto Show, according to videos and photos seen by Caixin. Zhang was wearing a custom T-shirt printed with the Tesla logo and the words “Brakes Lost Control” and “Invisible Killer” in Chinese. Footage appeared to show her being dragged away by security guards.

Police said Tuesday they planned to detain Zhang for five days. Two others — Li Yajun and An Baojia — were cautioned over the incident, according to publicly available police records (links in Chinese).

The protester was a Tesla customer from Central China’s Henan province whose father was involved in a February crash caused by excessive speed, the company said in a statement (link in Chinese) published on Weibo. The woman asked for a refund and rejected multiple solutions proposed by Tesla while refusing to have an independent check of the vehicle, Tesla said. The company said it will continue negotiating with the customer.

Tesla said in another Weibo post (link in Chinese) on Monday night that if the woman’s car had an issue, it would take responsibility, pay whatever compensation it owes and take whatever punishment it deserves.

Even as sales have soared in recent months, Tesla has faced growing complaints from customers, including allegations of brake failures. A Tesla car crash in South China’s Hainan province in mid-March sparked similar disputes between Tesla and the car owner over allegedly faulty brakes.

The Shanghai incident sparked heated discussion online about the safety of Tesla vehicles. It marked Tesla’s latest setback in China after its EVs were banned from military complexes because of concerns about sensitive information being collected by on-board cameras. Tesla pledged to store any data it collects in China to defuse the concerns.

The American EV-maker also came under a spotlight after a Saturday crash in Texas that killed two people. The Model S involved appeared to have no one sitting in the driver’s seat, local authorities said.

A Weibo user believed to be the protester wrote that her father tried to reduce his speed before the February accident but found that the brakes failed to work. Four family members were almost killed, the user said.

In a March statement regarding the incident, Tesla identified the woman by her surname and said the vehicle was traveling at 118.5 kilometers (73.6 miles) per hour and the braking system functioned normally. But Zhang said the speed was only 60 kilometers per hour and charged that Tesla had falsified its data.

Zhang also said in March that she was willing to have an independent investigation but refused an institution proposed by Tesla.

Tesla sales have grown rapidly in China since the company began building cars in Shanghai. In March, 34,635 China-built Teslas were registered in the country, according to data from the state-backed China Automotive Information Net. That’s almost double the 18,155 registrations in February.

Chinese car owners can find it hard to assert their rights due to the lack of an authoritative complaints body to resolve disputes. That means they have to take their issues back and forth between carmakers, dealers and government departments, in a time consuming and opaque process which can be aggravating for customers, one industry insider told Caixin.

This story has been updated.