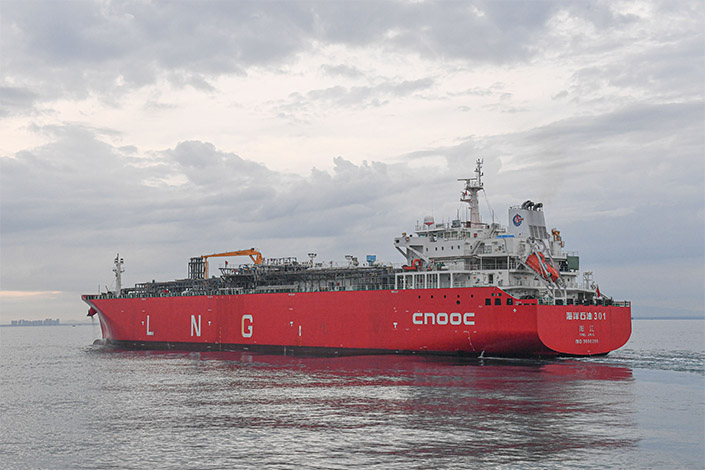 A LNG tanker of China National Offshore Oil Corporation sails in the sea off the coast of South China’s Hainan province in September 2020. Photo: VCG

The surge could spell another rough winter for Asian markets such as Japan, where power providers have been stocking up to avoid the shortages that drove up electricity prices last year. But they may still face exorbitant prices that risk hindering the economic recovery from the coronavirus pandemic.

China has become a major driver of rising prices as efforts to decarbonize push it toward LNG, a fossil fuel with relatively low emissions. The country accounts for about 20% of to-tal global imports this year, according to data from sources including analytics firm Kpler, a 12 percentage point increase from 2015.

The country’s imports have climbed more than 10% on the year in recent months, at 5.61 million tons in July and 6.65 million tons in August. It brought in 51.8 million tons of LNG in the first eight months of this year, topping Japan for the first time as the world’s leading buyer.

Europe is also ramping up LNG imports as tensions with Russia crimp supplies coming through pipelines in Ukraine. The continent’s purchases increased 6% on the year in Au-gust to 4.49 million tons, according to Kpler data.

The Oxford Institute for Energy Studies estimates European natural gas supply this year will fall just under 10% short of yearly demand. Energy companies are moving to procure LNG to make up the difference.

But supply growth has hit a wall.

The U.S., the world’s top LNG producer, registered record-high exports in the first seven months of this year. But “liquefaction facilities are operating at their limits,” said Hiroshi Hashimoto, senior analyst at the Institute of Energy Economics, Japan.

Other major suppliers, such as Australia and Qatar, also appear to have little leeway to ramp up production further.

This tight market is pushing up prices. The Asian LNG spot price, an international bench-mark, was up almost 90% in early October from a month earlier, beating the record set in January.

These conditions could prove problematic for Japan, where shortages last winter amid a cold snap sent wholesale electricity prices skyrocketing and drove some power retailers out of business. Power providers have been buying up LNG in advance to avoid a repeat of this experience.

Major Japanese power companies had about 2.4 million tons of LNG in inventory at the end of August, 50% more than a year earlier, according to the Agency for Natural Re-sources and Energy. Yet the risk remains that another stretch of cold weather could force utilities back to the spot market, sending wholesale power prices soaring again.

This comes amid a rise in crude oil prices that could also weigh on Japan’s economy.

Crude futures in New York hit a seven-year high Monday above $78 a barrel on news that OPEC and partners including Russia decided to keep up the current gradual pace of phas-ing out production cuts, limiting the supply to be added to the market. The nationwide av-erage price of regular gasoline in Japan reached 158.7 yen ($1.43) per liter in late Septem-ber, the highest in nearly three years.