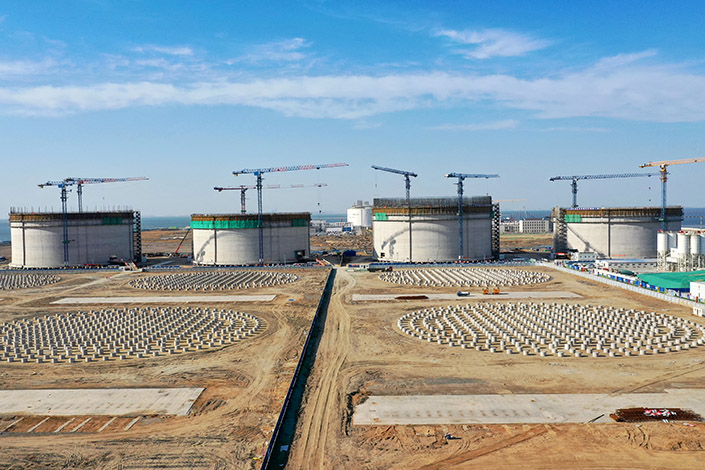 A large-scale LNG membrane tank in the northern city of Tianjin on June 7. Photo: VCG

The shift has been shaking up the landscape in recent months among China’s three energy majors, China National Petroleum Corp. (CNPC), China Petrochemical Corp. (Sinopec) and China National Offshore Oil Corp. (CNOOC). Each is suddenly finding its position greatly altered after the latest rejig that saw the creation of a modern national distribution network accessible to all.

That network came to life in October with the formal launch of China Oil & Gas Network Corp., also known as PipeChina. Years in the making, the new company took over the oil and gas pipeline assets, storage facilities and import terminals of the three state-run majors, with CNPC, which does business under the name PetroChina, contributing the most assets. The shift was meant to make the system more efficient, and to open the door for competition between the three giants and potentially other future players by giving everyone access to the same national network.

Such reorganizations are relatively common in big state-controlled sectors, as Beijing tries to find the most efficient formulas for wide-ranging assets that were once all part of the massive state-run complex during the planned economy era. In PipeChina’s case, the new network’s launch also lays the groundwork for Beijing’s ambitious plans to generate more electricity from cleaner-burning natural gas over dirty-burning coal that was traditionally China’s biggest power source.

While it’s still early days, the landscape is already changing as Sinopec and CNOOC open more regional offices to take advantage of distribution capacity where they formerly had none. At the same time, PetroChina — the biggest loser after PipeChina’s creation due to the loss of its extensive and exclusive network in many parts of the country — is stepping back to figure out its next steps.

All three energy majors have generally been localizing their decision-making as they try to figure out regional strategies that will give them the biggest competitive edge in the new landscape, said Shi Ning, a senior partner at industry consultant Zizhitonglian.

“PetroChina’s and Sinopec’s reforms are more about decentralizing power to their provincial sales units,” Shi said. “In fact, this would have been unimaginable in the past.”

An industry source said PetroChina is currently working on a resource allocation plan to adapt to the new landscape, involving more use of nearby natural gas supplies to lower its costs by lessening its reliance on long-distance pipeline transport. The company held a 90 minute teleconference in July 2020 explaining the likely impact of PipeChina’s creation to its senior managers. At the time, CFO Chai Shouping said the assets PetroChina was losing provided 15.65 billion yuan ($2.4 billion) in profits to the company in 2019, accounting for a third of its total.

Meantime, Sinopec is rapidly diversifying its national sales network after getting access to markets where it previously had no distribution infrastructure. As cases in point, Sinopec will now have access to networks in Yunnan and Guizhou provinces. It had never previously tried to enter those markets due to lack of pipeline resources, said Wu Bin, general manager of Sinopec’s liquefied natural gas (LNG) unit in the northeastern city of Qingdao.

In anticipation of the coming change, Sinopec launched a major overhaul of its natural gas business last year by integrating its upstream and downstream operations. The company has also been aggressively building out its natural gas sales network.

That network was previously centered on three major sales unit, one covering North China, one for the area from Sichuan province east to Shanghai, and one for South China. Working on that foundation, the company has recently added another 16 sales centers, giving it coverage in all of China’s 29 provinces.

“Our previous system had sales centers only wherever we had pipelines, which was North China, Sichuan-to-Shanghai and South China,” said Xi Haihong, a manager in the sales department of Sinopec’s natural gas division. “Since we only opened sales offices in places where we had pipelines, the focus on sales was light in the past and not too aggressive. Following the reform, we’ve broken up these three big pieces into smaller pieces to target local markets.”

Of the three energy majors, the one with the most to gain is CNOOC, which previously lacked the pipelines to transport natural gas over long distances within China. Many industry watchers told Caixin that CNOOC is moving quickly to try and seize downstream market share in the space. In particular, the company has been taking advantage of cheap prices for imported LNG to try and seize market share in China’s affluent eastern and southern coastal regions.

PipeChina’s launch and the subsequent competition it’s now sparking are just the latest wrinkle in the development of China’s natural gas network over the last 30 years.

The industry passed a major milestone in 2004 when it achieved east-west distribution across the entire country to help power its rapid industrialization and urbanization. By 2010 it completed another campaign that saw it set up a new generation of local natural gas distributors to feed the country’s energy hungry cities during its rapid urbanization.

With all those pieces coming together, China is hoping to sharply boost its use of the cleaner-burning fuel as part of its ongoing campaign to clean up the nation’s air.

Natural gas accounted for just 8.8% of China’s energy consumption in 2020, far less than the 24% average worldwide. That has left major room for expansion, with all three energy majors announcing grand plans for increasing their natural gas business in the years ahead.