By Lu Yutong and Flynn Murphy 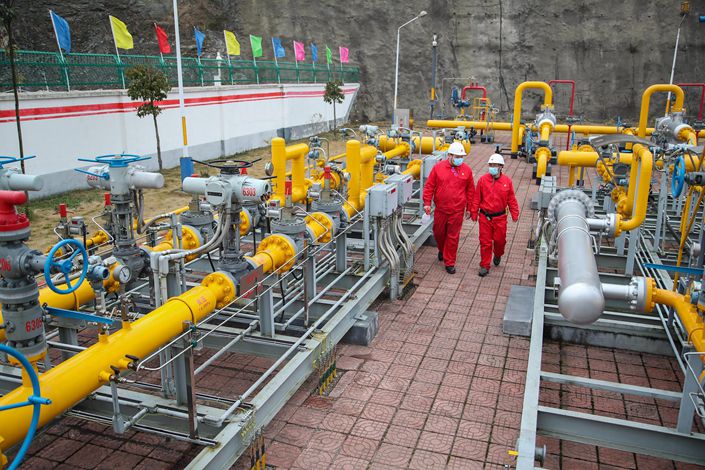 The company is at the center of a major structural reform of China’s energy sector.

Here are five things you need to know about PipeChina and the country’s changing energy landscape.

Its other stated aims are increasing the efficiency of oil and gas distribution and opening the pipeline business to third-party players and investment. PetroChina, the listed arm of CNPC, has a 29.9% stake in the new company and Sinopec Group a 14% stake, as part of deals announced last week.

Analysts see the new company as a way to ramp up oil and gas production, centralize the planning and building of new pipelines, and even the playing field for other players by wrestling power over distribution away from the majors — especially the dominant PetroChina.

Or as Vice Premier Han Zheng put it at the company’s opening ceremony in December, to encourage local oil and gas companies to integrate with the national distributor in “market-oriented ways.”

PipeChina will be responsible for building and managing China’s main national pipeline network to ensure fair market practices in oil and gas distribution, but will not participate in competitive upstream and downstream deals.

What is the underlying strategy?

Consolidating China’s midstream oil and gas business could reshape the industry, as in theory it means all oil and gas companies could, for example, have unbiased access to a major pipeline between two cities once owned by PetroChina. And it will make it easier for smaller, privately owned players to enter the sector in the future, as they won’t have to build costly infrastructure.

The State-owned Assets Supervision and Administration Commission of the State Council, the government body that manages most state-owned enterprises, told China’s three national oil companies to prepare for their distribution and storage assets to be consolidated into a unified national transmission network back in 2019.

That followed the expansion plan set by China’s top economic planner in 2017, when it announced plans to nearly double the length of China's pipeline infrastructure from some 136,000 kilometers in 2018 to 240,000 kilometers by 2025, a goal that now looks out of reach but would be even harder to achieve without massive investment and centralized coordination.

Another goal is the diversification of the ownership of the assets, which is why the national oil companies have seen their holdings in the new pipeline company diluted, as state-owned groups like SASAC have taken a share.

Infrastructure mergers among large state-owned enterprises (SOE) are relatively common in China, and the creation of PipeChina has been compared with the country’s earlier consolidation of the telecom sector. China Mobile, China Unicom and China Telecom integrated their cellular tower infrastructure to form China Tower Corp. Ltd., the world’s largest telecommunications tower infrastructure service provider, in 2014.

How far along is the plan?

On July 21, it made a 3.2 billion yuan deal with Sinopec for a company that owns a 996-kilometer (619-mile) pipeline stretching from Northwest China’s Shaanxi province to the eastern energy hub of Shandong province, with annual transmission capacity of 4 billion cubic meters.

PetroChina said in a notice Thursday that it has agreed to sell certain oil and gas pipelines, storage facilities, one LNG terminal in Shenzhen and ancillary facilities to PipeChina for 268.7 billion yuan.

The deal excludes assets of Kunlun Energy Co. Ltd., a listed company in which PetroChina holds a 54.4% stake. Kunlun is one of China’s largest oil and gas enterprises with an annual sales volume of 16 billion cubic meters of natural gas through its pipelines linking Shaanxi and Beijing.

Sinopec also released an announcement on Thursday in which it said it had agreed to sell some of its pipeline assets and a LNG terminal in Beihai, a coastal city in South China’s Guangxi Zhuang autonomous region, to PipeChina for 122.6 billion yuan.

Caixin reported in June that the trio will hand off management of 10 LNG terminals, nearly half of their combined total, to the newly formed giant. Of the terminals slated for transfer, seven come from CNOOC, two are from CNPC and one is from Sinopec. The terminals are primarily located in the southern Chinese provinces of Guangdong and Hainan, as well as Guangxi.

CNOOC hasn’t released any notices regarding the details of which assets it will transfer.

Multiple industry insiders told Caixin that PipeChina is aiming to start operation in September, before the start of the winter heating season.

Why is PipeChina paying a premium for the assets?

PipeChina is paying 1.2 times the book value for PetroChina’s assets, and 1.4 times for Sinopec’s.

“It’s not a secret that PetroChina and all the (national oil companies) were really dragging their feet on this for a while, just because this would mean structural reform to how they run their businesses. And obviously it’s easier to have the status quo,” Petrov said.

He pointed out that similar consolidations were also done at market pricing despite SOEs being involved.

“I don’t think it’s just a sweetener to (get the national oil companies to) just unbundle some of their assets. I think quite a bit of consideration went into the value of these assets,” Petrov said.

Wang Xueke, a Beijing-based gas and LNG consultant for Wood Mackenzie, pointed out that while the assets differ in age and value, transmission has been an extremely profitable business for companies like PetroChina.

Will the company achieve its goals?

Whether the new industry structure can provide a level playing field hinges on how fees and the transaction rules are decided and how the related regulations are formulated, industry insiders say.

“The building of PipeChina doesn’t directly lead to a level playing field, it only makes it possible,” said Chen Shouhai, professor at China University of Petroleum. The current regulatory power isn’t strong enough to safeguard fair competition among the vast pipeline network, as the National Energy Administration, the regulatory body, will need to regulate not only the oil and gas infrastructure, but also the downstream market after the consolidation is finalized, he added.

A manager at city-level gas company is more pessimistic. “We are used to dealing with just CNPC, but now we have to talk to PipeChina too — who knows whether the company would prioritize the needs of giant consumers like Sinopec and CNPC when supply is tight, and cut off our gas for safety reasons?”