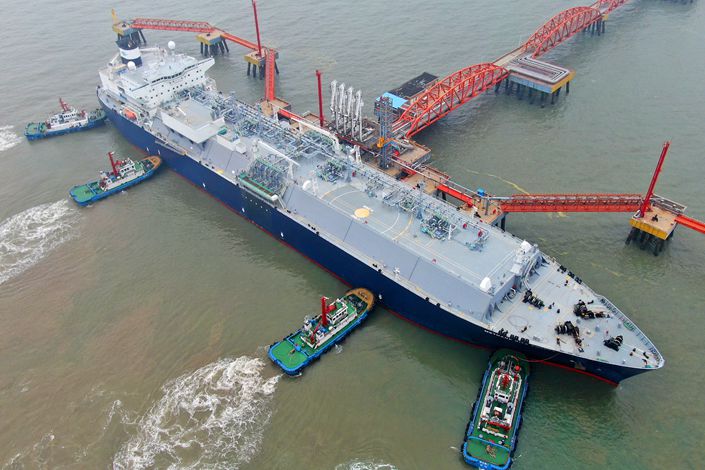 The LNG terminals are the first assets set to be consolidated under the new company.

China is moving ahead with its mega plan to consolidate state-owned pipeline and related assets by requiring the country’s three largest oil companies to hand off management of nearly half of their liquefied natural gas (LNG) terminals to a new state-owned giant, Caixin has learned.

The 10 terminals are among the first batch of assets set to be transferred to China Oil & Gas Piping Network Corp., an energy company established late last year to take over managing some of the infrastructure of China National Petroleum Corp. (CNPC), China Petrochemical Corp. (Sinopec) and China National Offshore Oil Corp. (CNOOC).

Although CNOOC announced in April that it had signed a contract for the terminal transfer, the two other giants have not made any similar public announcements.

The new company is part of a sectorwide reform that central planners hope will boost investment in and construction of oil and gas pipelines as part of efforts to safeguard China’s energy security.

Of the LNG terminals slated for transfer, seven come from CNOOC, two are from CNPC and one is from Sinopec. The terminals are primarily located in the southern Chinese provinces of Guangdong and Hainan, as well as the Guangxi Zhuang autonomous region, multiple industry insiders told Caixin.

For now, China Oil & Gas Piping will only have management rights over the assets, with ownership remaining in the hands of the three state-owned oil giants until an audit of the assets is finalized.

Once the consolidation is complete, 11 LNG terminals will remain under management of the three oil giants, two of which are still under construction.

As part of the consolidation, a group of 500 employees will be transferred to China Oil & Gas Piping, a person familiar with the matter said.

The LNG terminals are the first assets set to be consolidated under the new company. Industry insiders have said that some of the oil giants’ pipelines will also be incorporated into the company.

China’s oil and gas pipeline network spans 130,000 kilometers, 90,000 kilometers of which is operated by the three state-owned giants. Consultancy Woods Mackenzie previously estimated that China Oil & Gas Piping could end up being worth from $80 billion to $105 billion once the consolidation is complete.