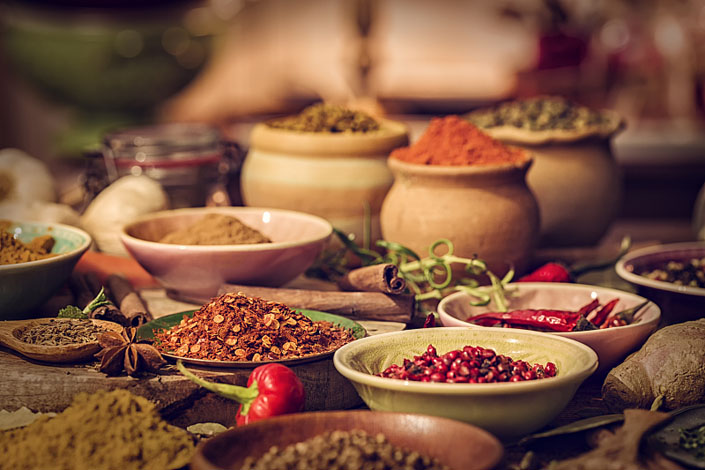 The ingredients that create the wide variety of flavors in Chinese cuisine. Photo: VCG

The Big Mac index is well known as an informal gauge of the economic standards and consumption capacities of countries. But actually, there’s also the pickle index, the lipstick index, and the ultimate indicator from everyday life — the regional food flavors index. What do the saltier, bold-flavored foods in provinces like Hunan, Jiangxi and Shandong, and the clean, light flavors of Jiangsu province say about the relative states of their regional economies?

After a recent thesis discussion, I had a meal with my students at the school cafeteria. One of the students who’s not a local lamented, “Food in Hangzhou school cafeterias is just not salty enough. The dishes are mostly on the sweet side. Once, I dined at my Hangzhou native friend’s house. All the meat dishes were seasoned with sugar. And none were spicy enough.” His remarks are representative of many views of Jiangnan cuisine. A few students from Hunan, Jiangxi, and Shandong nodded in agreement.

As an economics professor, I love using daily life examples to hone my students’ economic sense. How foods are flavored differently in various regions undoubtedly makes for a good economics topic.

So, I asked, “If what you think of Jiangnan cuisine is true, then what are the economic characteristics of regions that feature saltier and spicier food?”

The students remained silent for a while. Then, the student who earlier commented on Hangzhou food said, “I think the places with saltier and spicier cuisines are those that were underdeveloped in the past. Even until now, some of those regions may still be underdeveloped.”

The other students nodded in agreement, each supporting their claims with evidence. Even within Zhejiang, the eating habits of the Hangjiahu Plain are different from those of the southwest mountainous city of Quzhou.

Food from Jiangnan area is mostly mild in flavor. If I pinpoint a specific preference that these people may have, it would be that they love sweet food. But in a region so representative of the Jiangnan area, like Zhejiang, there is a small city named Quzhou whose people adore a contrasting style of spicy and strong flavors, a cuisine which has earned quite a reputation. The famous “three heads, one foot” (三头一掌) is a local speciality consisting of the heavily spiced heads of rabbit, duck, and fish, along with duck feet. Today, nobody bothers with rabbit heads and duck heads. But because living standards were previously bad in the region, the poor would eat duck heads and rabbit heads, and dishes featuring them gradually became local specialties.

Stronger flavors to get through hardship

If we measure the ratio of spicy food consumption in different regions to the total consumption of their respective residents, we would perhaps see a map of China’s economic development. If we apply this map to a China of the past, it would be a more accurate description of the local economic situation. This is because, following reform and opening up, while many regions saw rapid development within several decades, people’s eating habits formed over thousands of years could not be easily changed.

These habits are like an economic code — they reveal a person’s hometown and other historical and cultural information.

However, one of the students asked: “Today, whether we are having a meal in Beijing, Shanghai, Hangzhou or Guangzhou, there are hotpot restaurants and stalls selling spicy food everywhere. Are we saying that these regions are underdeveloped?”

Certainly not. Even the student who asked the question quickly answered himself, saying, “Oh yes, that’s because there are many people like us who have come to live in the big cities from our respective hometowns.” The student who complained earlier added, “Thankfully, there are many restaurants near school that serve spicy and fragrant food. Otherwise, our meals would be too plain and dull.”

Caught in a pickle

The “Fuling zhacai” (榨菜, pickled mustard) is a specialty of Chongqing’s Fuling district. Featuring a mustard plant native to the district, it is a local specialty made with a special technique. Together with France’s pickled cucumber and Germany’s sweet and sour red cabbage, it counts among the world’s three most famous pickled foods. Because it’s so unique, it is one of the most popular dishes among migrant workers as it offers them a taste of home. Hence, the changes in the sales patterns of Fuling zhacai often reflect population mobility trends, especially the flow of rural migrant workers to the cities. This in turn reflects changes in regional economies and trends in labor migration.

Hence, China formed a unique index illustrating population mobility trends called the “pickle index.” This can be used to deduce population mobility trends based on changes in sales volumes of the popular Fuling zhacai across various regions over a couple of years and later to determine the population inflow and outflow of a particular region. In this way, relevant authorities would be able to formulate policies best suited to the region based on various population structures. For example, following the financial crisis of 2007-2008, the sales volume of Fuling zhacai in southern China decreased year-on-year from 49% in 2007 to 29.99% in 2011. This suggested that population outflow from southern China after the financial crisis was rapid.

Apart from the pickle index, which is full of Chinese flavors, there are other indices that measure economic volatility, such as those jokingly referred to as the “lipstick index” and the “hemline index”.

The lipstick index was proposed by Leonard Lauder, the former CEO of The Estee Lauder Companies. Analyzing the actual revenue data of the company, Lauder discovered that during the 1990s’ recession, lipstick sales in the U.S. actually rose against the trend.

The lipstick index shows that when the economy is in recession, consumption is reduced as the result of economic downturn. It indicates that women become cautious about their spending, allowing themselves to only buy relatively cheaper cosmetic products such as lipstick. Thus, the poorer the economy is doing, the better the lipstick sales.

Economists seem to think that the lipstick index is not a good indicator of an economic downturn and often treat it as a joke. But many people believe that it is an inverse indicator of economic development. However, the economic recession brought about by the Covid-19 pandemic since 2020 may disprove the index. This is because everyone has been wearing face masks during the pandemic, so there has been reduced need to wear lipstick. McKinsey tracked the sales of beauty products on Amazon over a period of four weeks between March and April 2020. It found that retail sales in the “lip care and color” category had fallen by 15% — the largest dip — with prices down 28%.

Closely related to economic prosperity is the direction of the stock market, which is in turn predicted by the hemline index, otherwise known as the “bare knees, bull market” indicator. The U.S. stock market was quite sluggish in 1900 and the skirts of American women were very long, which looked pretty plain and boring. Prior to the Great Depression in 1929, women’s hemlines had risen but fell again as the economic crisis hit.

It’s been said that the American who discovered this index thought that women’s emotions reflected the career situation of bankers and investors — when the stock market is sluggish, investors are downcast and less likely to notice women’s allure. But as soon as the stock market gets better, women’s clothing will naturally become sexier as men’s attitudes change. Undoubtedly, there is an implicit assumption in this story that bankers and investors are mostly males.

The pickle index, lipstick index, and hemline index are but layman economic indicators which are never really taken seriously. However, the Big Mac index — another informal economic indicator — actually made it into macroeconomics textbooks. The index was invented by the U.K. financial weekly The Economist in 1986 and is published annually as a “light-hearted guide” to whether currencies are at their correct level based on the theory of purchasing power parity (PPP).

Assuming that a floating exchange rate is allowed, PPP, as defined in The Economist's Big Mac index, is the notion that “in the long run exchange rates should move towards the rate that would equalize the prices of an identical basket of goods and services” in any two countries. But how do we choose what goes into this identical basket? After all, each country has different production capacities for different commodities, and putting different products into this basket would result in different outcomes.

McDonald’s has become a symbol of globalization and the price of a Big Mac purportedly reflects the economic standard and consumption capacity of the country. The reason why Big Macs were chosen is that this product is available in many countries, its product specifications are the same almost everywhere, and local McDonald’s dealers bargain for their own prices for raw ingredients. These factors allow for a more meaningful comparison of currencies across various countries and offer an informal evaluation of their PPP.

In 2004, The Economist developed its Tall Latte index, similar to the Big Mac index, except that McDonald’s Big Mac is replaced by Starbucks’ tall latte. The emergence of this index is not only based on Starbucks’ successful global expansion, but also the highly globalized coffee bean trade. The Big Mac index thus pales in comparison to the Tall Latte index in terms of its accuracy.

Every aspect of economic life comes together to form an organic whole. The subtleties of many large economic fluctuations do in fact manifest themselves in seemingly insignificant daily life experiences, which can then form an economic code. As long as we are observant, we will discover many of their secrets.