Gas Crunch Will Prolong the Energy Crisis Into 2022 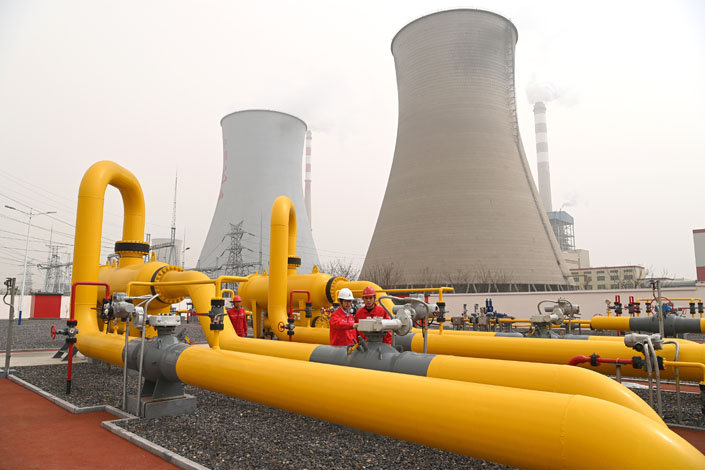 Sinopec workers inspect the facilities at one of the Chinese energy giant’s pipeline companies in East China’s Shandong province on March 28. Photo: VCG

(Oxford Analytica) — Strong demand for gas from Asia and Europe is pushing gas prices higher and the Henry Hub natural gas spot price is close to USD6 per metric million British Thermal Units (MMBtu), its highest since 2008 and two to three times as high as a year ago. Particularly in Europe, where gas-fired generation sets the marginal power price, high gas prices are being passed directly through into higher electricity prices.

Demand destruction and increased supply will eventually moderate the price rises, but little respite is expected through the fourth quarter. A cold northern hemisphere winter could keep prices higher for longer. Many northern regions are set to enter the winter with natural gas stocks well below the norm, increasing the risk of physical supply shortages. Recourse to coal and potentially oil-fired generation is possible, setting back plans to cut emissions.

• Low-income households will be particularly hard hit by increased gas and power prices, despite government efforts to protect consumers.

• Reduced industrial activity will hamper the process of supply chain restocking and pass price pressures through to manufactured goods.

Natural gas prices in Asia and Europe have reached seasonal and record highs:

• On September 30, the Japan-Korea Marker, a price assessment of spot LNG prices in the Asian market, rose to just over USD34 per MMBtu, a record high.

• European gas prices at the Dutch Title Transfer Facility, Europe’s most liquid gas hub, traded at just under EUR92 per MWh for the November contract on September 30.

• Gas prices at the US Henry Hub averaged USD5.94 per MMBtu from September 27 to October 1. US gas prices are more than three times higher than a year ago.

Growth in LNG trading has created a price transmission mechanism between gas markets that were previously regionalized.

US LNG exports hit record levels in January-June 2021, up 19% year-on-year. Pipeline gas exports to Mexico rose by 19% while imports of gas from Canada increased by 12.5%.

US domestic consumption has stayed flat; the use of gas as an industrial input was down by 0.75% year-on-year in January-June. US shale drillers have responded modestly to higher oil prices by increasing output, which has also led to somewhat higher gas output.

Storage was 16% lower year-on-year in September, and 5.4% below the five-year average.

China has been the main driver of LNG demand growth as its economy recovers from the pandemic and hot weather has driven air-cooling demand, requiring additional electricity generation, which gained 13% year-on-year in January-August.

Gas-fired generation plays a relatively small role in China’s electricity mix but its share has risen each year since 2008 to hit a record 247 terawatt hours last year (more than double UK electricity generation from gas).

This has come at the expense of coal-fired generation, although the latter remains the backbone of the power sector. The sector has recently suffered coal shortages owing to weaker domestic mining and an informal ban on Australian coal imports, and has tapped its reserve stocks. With hydroelectric generation low, the power sector has increased its consumption of gas, adding to demand from cities and industry for the fuel.

Chinese gas imports by pipeline have barely risen in the face of higher demand, increasing the country’s reliance on LNG imports. These rose by 24% year-on-year in January-July 2021. The year-on-year increase is significant as Chinese LNG imports gained 10.6% last year despite the impact of the pandemic. The country looks certain to overtake Japan as the largest LNG importer.

South Korean LNG imports were up 11.6% year-on-year in January-June, while Japanese imports gained 6.8%. Japan, South Korea and China accounted for just over half of world LNG demand in 2020. Taiwan increased LNG imports in January-June due to soaring power demand and nuclear plant closures.

Competition from Asia for LNG and rising demand have left Europe short of gas. Gas storage facilities were only 75% full at end-September. The five-year seasonal average is 87.4%.

Pipeline supplies have increased but not sufficiently to match demand.

Controversy surrounds Russian gas supplies. Russia’s monopoly pipeline gas exporter Gazprom has been fulfilling its contractual commitments, but the International Energy Agency has said it could export more. However, a study by the Oxford Institute for Energy Studies (OIES) published in September, said that Russian exports to Europe, including Turkey, had returned to record levels in the first half of 2021, and argued that although Russia has spare pipeline capacity, it has reached the limits of its short-term output capacity.

LNG production capacity has expanded in recent years. However, planned and unplanned maintenance this year has restricted supply:

• Australian LNG exports in May and June were the lowest since February 2019.

• US exports, while at record highs, have not reached their potential owing to maintenance on pipelines feeding some LNG plants.

• Norway’s Hammerfest LNG plant has been offline since a fire in September 2020 and is scheduled to restart in March 2022.

Several factors will rebalance gas markets, but prices are likely to remain high, especially if the northern hemisphere winter is cold.

LNG volumes reaching Europe are expected to rise in October-December. Norway has pledged to raise its gas output by 2 billion cubic meters for the gas year starting on October 1. The possibility that an early start-up of the Nord Stream 2 pipeline will increase total Russian gas exports to Europe depends on whether the OIES is correct about Russia’s productive capacity at present.

US shale drillers are beginning to respond to higher prices.

Gas and electricity-intensive industries may reduce or halt operations, for example ammonia manufacturers.

There are constraints to an increase in coal consumption because Chinese and Indian coal stocks are low, and coal prices have risen strongly. In Europe, record carbon allowance prices under the Emissions Trading System have raised the cost of coal.