By An Limin, Bao Zhiming and Ding Yi 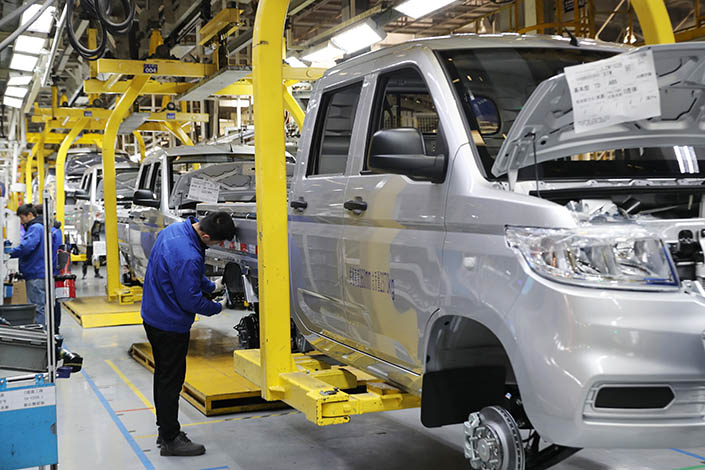 China’s auto exports in the first nine months of 2021 more than doubled from a year earlier due to the industry’s recovery from the fallout of the Covid-19 pandemic.

China exported more than 1.36 million vehicles from January to September, according to China Association of Automobile Manufacturers (CAAM) statistics released Tuesday, compared with 620,000 in the same period in 2020.

The figure represents a stark rise from the 910,000 vehicles sold over the first nine months of 2019 before the worldwide spread of the coronavirus put auto sales at the mercy of disrupted supply chains and dampened consumer demand.

Xu Haidong, vice chief engineer of the CAAM, attributed the growth to the gradual recovery of domestic car production from the initial shock of the pandemic and the persistent efforts by China’s automakers to beef up investments overseas.

In recent years, a growing number of China’s carmakers have penetrated further into overseas markets by establishing or acquiring offshore manufacturing facilities — a move that can help them reduce costs and avoid import taxes.

The latest example of this push is Great Wall Motor Co. Ltd., which in August bought a Daimler factory in Brazil in its foray into Latin America’s largest economy. The plant will have an annual production capacity of 100,000 cars, according to Great Wall Motor, which also makes cars in India and Thailand.

According to Tuesday’s statistics, in the nine months through September, new energy vehicles (NEVs), a category that includes electric, plug-in hybrid and hydrogen fuel-cell vehicles, accounted for 14.3% of China’s total auto exports, totaling 195,000 vehicles and up 420% year-on-year.

The staggering growth in NEV exports comes more than a year after China raised its 2025 sales target for NEVs to a quarter of all car sales from the previously planned level of 20%. It also scaled back subsidies on electric cars to encourage local manufacturers to rely on innovation rather than government assistance.

The national NEV ambitions have accordingly given China’s electric-vehicle makers more leeway to grow and have led to the rapid rise of a group of young brands led by Nio Inc., Xpeng Inc. and Li Auto Inc., which have shot to fame for adopting what they called automated driving technologies in their cars.

On Sept. 30, Nio started selling its flagship ES8 electric SUVs in Norway in its first step to carve out territory in Europe, with plans to bring its ET7 electric sedan to the country in the second half of next year. In June, Nio gained Whole Vehicle Type Approval for the ES8. The approval is an official permit that allows the car to be sold across all EU countries.

Nio’s expansion into Norway came 10 months after Xpeng began handing over its G3 electric SUVs to customers based in the same Scandinavian country.

Besides Europe, Japan is also a hot sales destination for Chinese electric carmakers. On Monday, Nikkei Asia reported that a subsidiary of state-owned Dongfeng Motor and other Chinese automakers will supply a combined 10,000 small electric trucks to Japan’s logistics firm SBS Holdings Inc.

China’s auto exports will continue to rise as Chinese automakers have shown signs of taking a lead in the industry’s move toward all-out electrification, CAAM’s Xu said.