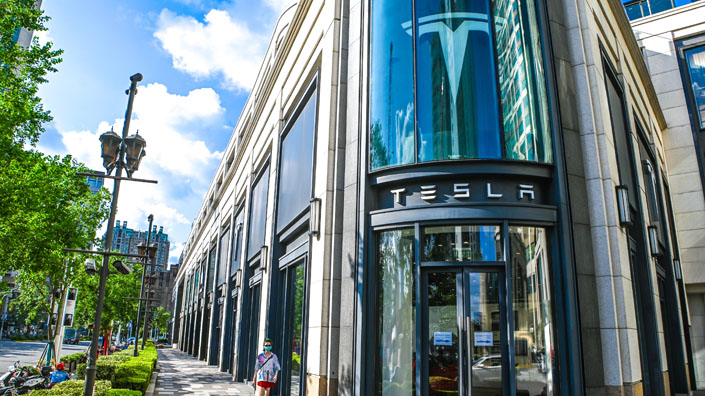 (Nikkei Asia) — Tesla is expected to earn about $390 million this year from automobile emissions credits in China, while Volkswagen looks to be the biggest loser in the carbon trading scheme.

Automakers and auto importers operating in China are required to manufacture and sell a certain ratio of new-energy vehicles, which include electric cars and plug-in hybrids. Companies receive credit points for surpassing the goal, set at 12% of total sales volumes in 2020. Trading of those credit points started this year.

China’s industry ministry recently released data on the number of credits allotted to automakers in 2020. Tesla, which makes electric vehicles in Shanghai, is the top recipient of the credits. The U.S. automaker attained 890,000 points, including those earned by its import and distribution center in Beijing.

The amount of income Tesla earned by selling the credits has not been disclosed. But Chinese media reports indicate the company may reap roughly 2.5 billion yuan ($387 million). LMC Automotive, a British market intelligence firm, estimates that each credit was worth 3,000 yuan on average in 2020.

BYD, the Chinese electric vehicle powerhouse, ranked second at 750,000 points. The credits would be worth about $350 million, equivalent to more than half of last year’s net profit.

SAIC-GM-Wuling Automobile, known for its $4,500 EV, took third with 440,000 points. The joint venture has developed a business model based on earnings off the emissions credit market.

Not all automakers can sell enough new-energy vehicles. The trading system lets them buy surplus credits from companies that did. The volume of trading is forecast to reach 10 billion yuan this year.

Two of Volkswagen’s joint ventures compiled the most negative credits. FAW-Volkswagen Automotive was slapped with 130,000 negative points, the most of all automakers, due to its sparse selection of new-energy vehicles.

FAW-Volkswagen will need to purchase 400 million yuan worth of credits, according to some media reports. Some speculate that the company has already bought credits from Tesla.

Volkswagen was the first foreign automaker to enter China, dating to the 1980s. But the multinational has lagged in responding to demands for environmentally friendly vehicles.

SAIC Volkswagen Automotive is the second-biggest recipient of negative credits. The venture has said it is purchasing emissions credits from outside, but disclosed no further details.

Volkswagen will invest 15 billion euros ($17.3 billion) into Chinese new-energy vehicles between 2020 and 2024 to tap a growing market and cut spending on credits. The company aims to have at least 30 such models by 2030 and quickly eliminate credit purchases.

Japanese automakers have not fared well, either. Honda Motor’s two joint ventures ranked fourth and sixth in negative credits charged. The Chinese arm offers only three new-energy models, though 10 Honda-branded EVs are to roll out in five years.

Toyota Motor, the top-selling Japanese carmaker in China, is also behind on credits at its joint ventures. Dongfeng Motor, backed by Nissan Motor, ranked third in terms of negative credits. Dongfeng plans to introduce nine new-energy models in China by 2025.

State subsidies helped China amass sales of 1.36 million new-energy vehicles last year. The share among all new vehicles sold rose to 5%, and Beijing targets 20% by 2025. Emissions credit trading will serve as the driving force behind that goal. It is believed the credit market is modeled after California’s system.

The new-energy vehicle quota rises by two percentage points yearly until it hits 18% in 2023. Failure to offset negative credit may impact in the following year’s registrations of new autos. In that light, companies appear to be adhering closely to the rules. Each credit will be traded at 5,000 yuan on average this year, forecasts LMC Automotive.