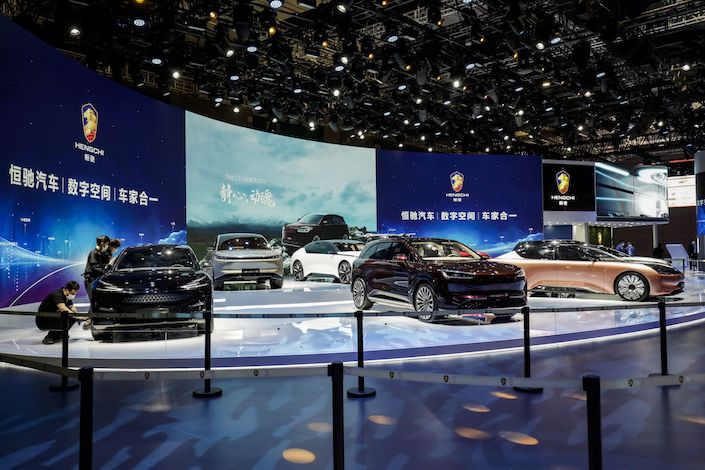 The Hong Kong-listed company — which at its peak in April was worth more than Ford Motor Co. despite not yet having a car on the market — has become ensnared in the woes of its parent, China Evergrande Group. The property developer said Tuesday it’s facing “tremendous” liquidity strains as it grapples with $300 billion of liabilities.

Evergrande also said it made “no material progress” on plans to sell stakes in the electric-car unit, which was once one of its most valuable assets. Evergrande NEV stock plunged as much as 28% in Hong Kong trading Tuesday to as low as HK$3.70. It has slumped 95% from its highs.

In its earnings report last month, Evergrande NEV said it might have to delay car production unless it can secure more capital in the short term, making its ambitious goal of unseating Tesla Inc. as the world’s biggest EV maker even more unlikely.

The plunge is a far cry from the heady days of last year and into early this year, when the stock capped a stunning 750% rally, becoming the poster child of a bubble in EV stocks as investors plowed money into the likes of Tesla and the U.S.-listed shares of Chinese startups Li Auto Inc., Xpeng Inc. and Nio Inc.

As recently as April, Evergrande NEV made a splash with an expansive showroom at the heart of the Shanghai Auto Show. But while nine models were put on display, none is yet available for sale, and the prospect of mass production looks increasingly distant.