By An Liming and Manyun Zou 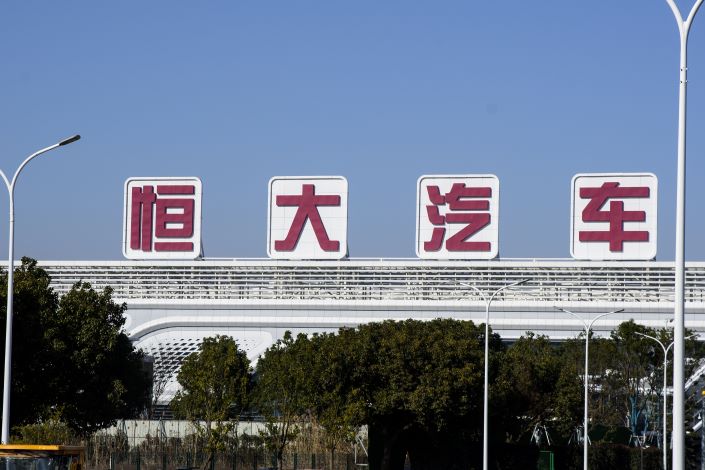 As China Evergrande Group struggles with a financial crisis, the property developer’s electric car unit is offering little relief, saying that its ballooning first-half loss may force it to delay the start of mass production.

Hong Kong-listed China Evergrande New Energy Vehicle Group Ltd. had a 4.8 billion yuan ($745 million) loss, about twice as much as in 2020, according to its mid-term financial report (in Chinese), which was in line with preliminary figures offered earlier this month.

“If the company fails to achieve more investment in the short term, the timetable of … mass production may have to be delayed,” said the report, which was released late Monday. The unit had planned (link in Chinese) to kick off mass production of its Hengchi marque in the second half of this year.

“Evergrande builds cars out of nothing but money, and now they may have to revise their plans,” a source close to the matter told Caixin. The company is considering cutting spending on research and development and trying to roll out a mass-market model.

Another source told Caixin that Evergrande NEV’s vehicle development process is particularly expensive as it outsources most of its R&D.

“The mass production of new vehicles will likely happen in 2022, according to the current development pace,” the source added.

The latest financial report says the company has delayed payments to suppliers and contractors and is working on the problem in order to “resume construction” and “reduce the penalties.”

Evergrande has reportedly looked for investors to inject cash into the unit. In early August, shares of Evergrande NEV rose 8% after Reuters reported that its parent is in talks to sell stakes in the carmaker as well as a property management unit.

Evergrande NEV has also announced plans for a secondary listing on Shanghai’s STAR Market. No significant progress has been revealed since September last year.

Evergrande NEV earns most of its money through the health management business it cultivated before launching its new-energy vehicle projects. The unit’s health business had 6.9 billion yuan of revenue in the first half, compared to the vehicle business’s 370 million yuan, the report said.

As a relative newcomer to car-making, Evergrande has focused on partnering with other players or acquiring other companies. In its first year in the automotive field, 2018, the company invested $800 million in electric vehicle startup Faraday Future Intelligence Electric Inc., owned by debt-ridden and controversy plagued businessman Jia Yueting.

A months-long dispute over ownership soured that deal, until both sides agreed to withdraw and waive all litigation and arbitration proceedings. Evergrande now has a 20% stake in Faraday Future, which debuted on Nasdaq in July and is yet to begin mass production of any vehicles.

The rocky road to mass production comes as its indebted property development giant parent is struggling with a 570 billion yuan mountain of debt, lawsuits and official opprobrium.

Evergrande has been caught in a cash crunch and debt crisis since its access to new funding was severely diminished after regulators moved to curb debt levels among property developers last year, resulting in recent sell-offs in its bonds and stocks.

Kelsey Cheng contributed to this story