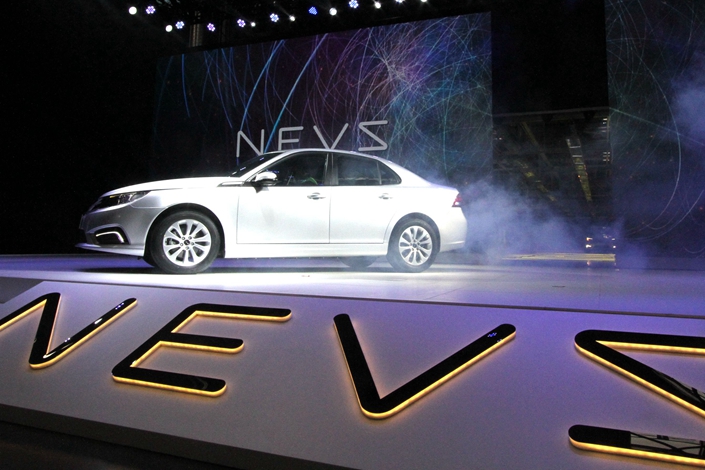 In June, National Electric Vehicle Sweden, majority owned by Evergrande, started mass production of its first electric vehicle — the NEVS 9-3 EV, which was shown in the northern Chinese municipality of Tianjin in December 2017. Photo: IC Photo

Real estate giant China Evergrande Group is betting big that China’s electric car sector will continue to boom, even as the subsidies that played a huge role in creating the market are getting phased out.

With the stated ambition of becoming the world’s largest new-energy vehicle company, Evergrande said it spent 14.1 billion yuan ($1.96 billion) on electric-vehicle (EV) projects in the first half. It says it plans to pump another 6 billion yuan into the area by year end.

However not much yet seems to have materialized from these big dreams, as the company has faced a high-profile soured deal, challenges integrating the tech it is acquiring and broader EV market headwinds.

Last month, the unit that operates the group’s EV and health care businesses — Evergrande Health Industry Group Ltd. — said it would book an estimated loss of 2 billion yuan in the first half of this year.

It blamed the loss on surging costs in the EV business, including investment-related projects and research and development expenses. Much of the spending went on acquisitions of EV-related companies — including a battery manufacturer, an in-wheel motor maker and a smart-car manufacturer.

But the problem with an acquisition-led approach to developing an EV business, according to analysts, is that most of the companies Evergrande can buy are not industry leaders, and moreover it will be difficult to integrate them into a unified, effective business.

Since its founding in 1996, Guangzhou-based Evergrande has made a fortune on the back of China’s real estate boom. It reported a net profit of 14.9 billion yuan in the six months to June this year, down 51.6% from the same period a year before.

But as the real estate market has slowed down in recent years amid stricter regulation and financial tightening, big developers have looked to diversify their business — to mixed results.

In 2013, Evergrande entered the food and beverage industry, starting its own purified water, grain, oil and dairy businesses.

But it gave up on these efforts in 2016 after years of losses. Its water business lost nearly 4 billion yuan between November 2013 and May 2015.

Evergrande then looked to the new-energy vehicle sector, which at the time was being buoyed by generous government subsidies. The handouts — which aim to both clean up the country’s polluted air and create cutting-edge technologies that can be exported — helped China pass the U.S. as the world’s largest electric car market in 2015. However, the government has since said it will completely phase out financial support by the end of next year.

In 2018, the company invested $800 million via Evergrande Health in Faraday Future, an electric vehicle startup owned by debt-ridden entrepreneur Jia Yueting. Evergrande committed an additional $1.2 billion in two installments of $600 million each in 2019 and 2020.

But the deal went sour after a months-long dispute over ownership. In January, the two sides finally agreed to withdraw and waive all litigation and arbitration proceedings. Evergrande now has a 32% stake in Faraday Future without any additional investment commitments. The debacle contributed to Evergrande Health booking a net loss of 1.4 billion yuan last year.

Despite its experience with Faraday Future, Evergrande has continued to partner with or acquire other companies in the sector. In January, it paid $930 million for a 51% stake in Sweden-based electric automaker National Electric Vehicle Sweden AB (NEVS).

In June, NEVS started mass production of its first electric vehicle — the NEVS 9-3 EV. According to a financing document obtained by Caixin, the company planned to put 1,000 vehicles on sale by the end of this year

However the car’s relatively short range and technology have been criticized by investors.

The 9-3 EV can travel 355 kilometers (220 miles) on a single charge and starts at 169,800 yuan, according to a statement released by the Ministry of Industry and Information. By comparison, the Aion S model recently launched by GAC New Energy Automobile Co. Ltd. can travel 500 kilometers and is sold from 146,800 yuan.

However, anonymous sources within NEVS’ China-based subsidiary expressed doubt about whether all the technologies Evergrande is acquiring can be effectively integrated with each other, as some are not mutually compatible. It is unlikely that the technologies will be adapted for use by NEVS before the end of next year, they said.

An anonymous industry insider said that it is difficult to integrate several newly acquired companies even with a proper organizational mechanism — something Evergrande lacks.

Evergrande’s EV business is also subject to the same industry headwinds facing its peers — sales of new-energy vehicles fell 4.7% in July from a year earlier to 80,000 vehicles, the first decline since January 2017, according to data from the China Association of Automobile Manufacturers.

Despite the difficulties facing its EV business, expansion into this government-supported field has allowed the developer to feed its core business with cheap land.

At a meeting with analysts last week, Evergrande President Xia Haijun said that when the company negotiates with local governments about an EV project, it will first estimate how many jobs the project will create, one of the analysts told Caixin. They requested anonymity.

Evergrande will then require the local authorities to offer it cut-price residential-zoned land to meet the demand of its future employees, Xia said, according to the analyst.

Evergrande declined to comment on what the analyst said.

However public information shows that Evergrande in February signed a deal with Zhengzhou, capital of Central China’s Henan province, for an electric car investment project. As part of the deal, Evergrande acquired 810,000 square meters of residential land in the city for just 2,000 yuan per square meter, well below the city’s average price of 12,000 yuan.

As of Aug. 12, Evergrande has acquired 3.07 million square meters of residential land nationwide this year via EV-related investments. That’s equal to 13.4% of the total land Evergrande acquired last year.

The group is now relying on purchasing cheap land through EV-related projects, as this could offset losses brought about by EV investment more generally, Xia said during a first-half earnings briefing last week.

Evergrande has several planned manufacturing facilities across the country. In March, the company invested a total of 14.6 billion yuan in Henan on a battery production project and an auto body manufacturing project. The group has also invested in similar projects in the eastern Chinese provinces of Anhui and Jiangsu.

Work has begun on EV manufacturing facilities in Tianjin and Shanghai, which are expected to be able to pump out 220,000 vehicles and 100,000 vehicles per year, respectively.

Yet one remaining question is whether Evergrande’s future EV sales will be able to match the manufacturing capacity it is now building.