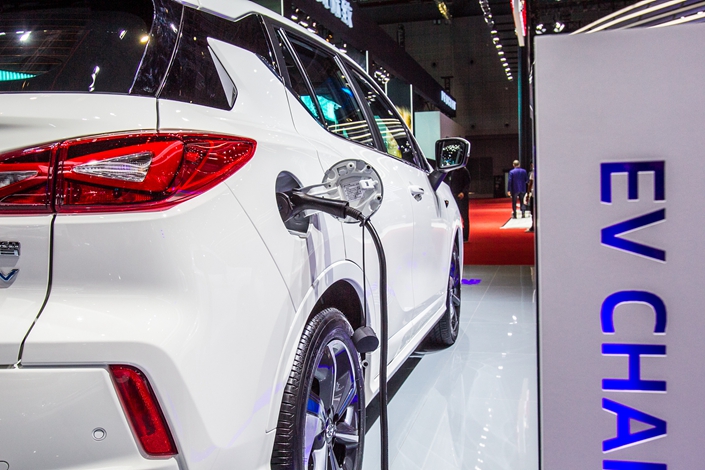 A new-energy vehicle sits on display at an auto show in Shanghai on April 19. Photo: VCG

China’s new-energy vehicle (NEV) market is expected to contract for the rest of this year with the phasing out of government subsidies, analysts said, after the industry posted its first decline in more than two years in July.

Sales of NEVs — a category that includes pure electric and hybrid electric cars — fell 4.7% in July from a year earlier to 80,000 vehicles, the first decline since January 2017, according to data (link in Chinese) released Tuesday from the China Association of Automobile Manufacturers (CAAM), the country’s biggest auto industry association. CAAM figures represent deliveries to dealerships, not end consumers.

Chinese automakers produced 65,000 pure electric cars in July, down 4.8% year-on-year, while sales of such vehicles rose 1.6% to 61,000. Production of plug-in hybrids declined 13.2%, and sales fell 20.6%, according to CAAM. The association attributed the rare decline to fading government subsidies for NEVs.

China has provided generous subsidies to promote new-energy vehicles for nearly a decade, aiming to clean up the country’s polluted air and create cutting-edge technologies that can be exported. The handouts helped China pass the U.S. as the world’s largest electric car market in 2015.

But the central government has announced it will phase out financial support completely by the end of 2020, as it attempts to make the industry more self-sufficient following a period of frequent subsidy abuse. The latest phase of that reduction, effective from June, slashed subsidies for new-energy passenger vehicle manufacturers by 50%.

The slowdown is expected to continue for the rest of this year, following a recent spike in purchases as many customers rushed to buy electric cars ahead of the cuts, said Tian Weiguang, senior consultant at Guangzhou-based automotive data firm Ways.

The new-energy industry will also face headwinds in the second half of this year from more global factors such as the China-U.S. trade war, said Cui Dongshu, secretary-general of the China Passenger Car Association.

The government needs to take steps to lower the risk of a “hard landing” scenario, while the industry transitions from being policy- to market-driven, Cui said.

The subsidy cuts have also hit BYD Co. Ltd. — one of China’s largest electric car makers. The company’s electric vehicle sales dropped 12% to 16,567 vehicles in July, marking its first decline in 2019, according to a statement (link in Chinese) released by the company.

Mo Yelin contributed to this report