By Liu Yukun and Timmy Shen 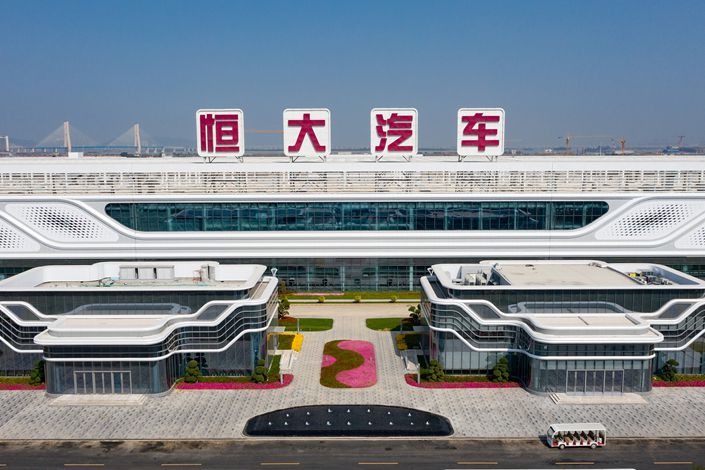 Evergrande NEV’s earnings reflect the parent’s willingness to spend to achieve its automotive ambitions, even as it continues to rely on its legacy health care business. At an earnings briefing Thursday, the unit’s Chairman Shawn Siu said that Evergrande NEV has spent 47.4 billion yuan so far on its new-energy car business, including nearly 25 billion on core technology acquisition and research and development.

To fund these investments, Evergrande NEV has been out raising money. Just in January, it drummed up HK$26 billion ($3.3 billion) through a private sale of Hong Kong-listed shares to six investors including Greenwoods Global Investment and Liu Minghui, chairman of China Gas Holdings Ltd. The company said that it plans to use the new funds for technology development, production of new-energy vehicles and to repay debt, as it aims to become “the world’s largest and most powerful new energy vehicle group.”

China Evergrande Group got into the NEV business in 2018, and the next year started acquiring companies in the global automotive industry through its heath care subsidiary, Evergrande Health Industry Group Ltd., which it renamed in September 2020 as Evergrande NEV.

“Evergrande had nothing to make cars with” China Evergrande Group CEO Xu Jiayin said at a company event in November 2019, before adding “we’ve bought all the technology and companies that we can lay our hands on.”

However, Evergrande NEV has yet to start mass producing its NEVs and continues to rely on its health management division for much of its revenue. Last year, that division pocketed 15.3 billion yuan in revenue, compared with about 187.5 million yuan from its auto business, according to the annual report.

The report showed that the loss was primarily due to a decline in gross profit from its health management business and higher expenses for marketing, interest and R&D from its new-energy vehicle business. In 2020, Evergrande NEV poured almost 1.7 billion yuan into R&D, according to the report, a torrent compared with 2019’s total of 295 million yuan.

Much of its NEV division’s revenue still comes from sales of batteries for electric vehicles. Last year, the revenue generated from the company’s new-energy vehicle business shrank by 71.6% to 187.5 million yuan, mainly due to a drop in battery sales that occurred as it upgraded its product line, according to the report.

However, Evergrande NEV said that it has established R&D bases in Shenzhen, Shanghai and Osaka, Japan, to develop EV batteries. The company aims to begin mass producing its self-developed batteries in the second half of this year, Siu said at the briefing.

Ding Yi and Heather Mowbray contributed to this report.