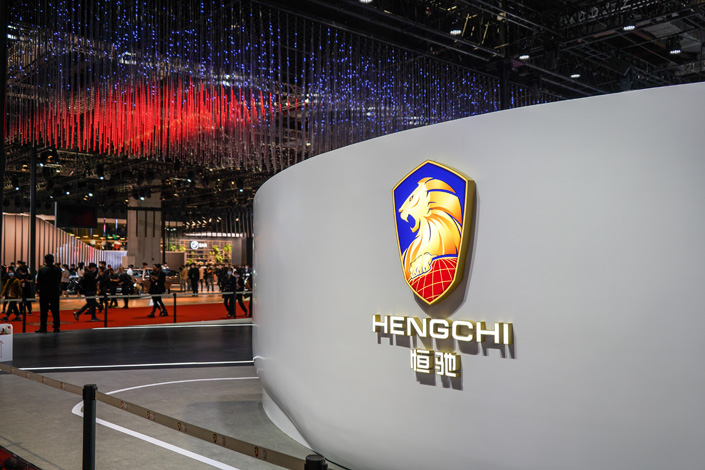 An electric car developed by Evergrande’s new energy vehicle unit sits on display at an auto show in Shanghai on April 19. Photo: VCG

The preliminary net loss incurred by China Evergrande New Energy Vehicle Group Ltd. (Evergrande NEV) is almost double the loss of 2.45 billion yuan a year earlier, according to a filing to the Hong Kong Stock Exchange late Monday. The amount was mainly attributable to the NEV business’s purchase of fixed assets and equipment, as well as research and development.

However, shares of Evergrande NEV rose 8% to close at HK$13.2 on Tuesday after Reuters reported Monday night that its parent is in talks to sell stakes in its new-energy vehicle arm and its property management business, Evergrande Property Services Group Ltd., which is also listed in Hong Kong.

Citing an unidentified source, the report said negotiations with state-owned and private companies for the sale of stakes in the NEV and property management business were “advancing smoothly.” Shares of Evergrande Property Services soared 20.5% to close at HK$6.7 on Tuesday.

The property developer first entered the NEV sector in 2018 through its subsidiary Evergrande Health, which was renamed China Evergrande New Energy Vehicle Group in August 2020.

Evergrande has been caught in a cash crunch and debt crisis since its access to new funding was severely diminished after regulators moved to curb debt levels among property developers last year, resulting in recent sell-offs in its bonds and stocks.

A decision of this kind, known as “centralized jurisdiction,” is usually made when a company is involved in a large number of lawsuits across regions and the situation has the potential to cause a significant impact on society.

On Aug. 1, the company said in a filing that it had agreed to sell stakes in its internet unit HengTen Networks Group Ltd. for a total of HK$3.25 billion.

Meanwhile, three major global credit rating agencies have all downgraded Evergrande. In an Aug. 5 note, S&P Global Ratings Inc. further downgraded the conglomerate deeper into junk territory from B- to CCC, citing its increasingly strained liquidity and higher nonpayment risk. It is the conglomerate’s second downgrade by S&P in two weeks.