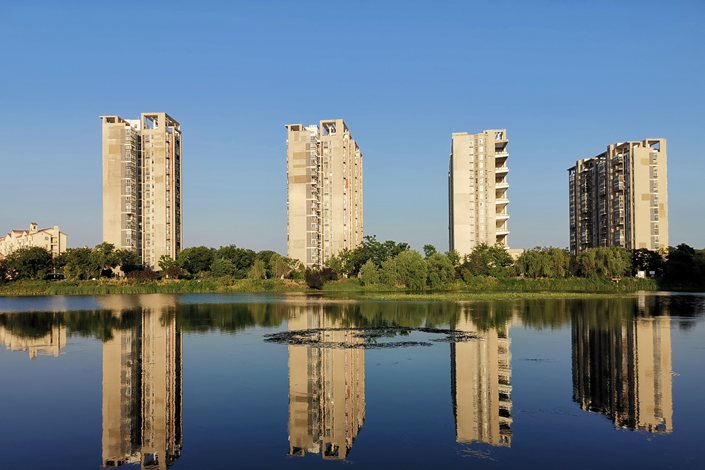 Regulators are due to test a new financing directive on 12 top real estate firms that will limit their ability to take on more borrowing, according to sources who took part in a meeting between the People’s Bank of China, the Ministry of Housing and Urban-Rural Development, property firms and other government bodies on Aug. 20 in Beijing. Developers subject to the trial include China Evergrande Group, Sunac China Holdings Ltd. and Country Garden Holding Co. Ltd.

The ability of companies in the pilot to increase their debt will be subject to three red lines: a liability-to-asset ratio (excluding presales) of no more than 70%; a net debt-to-equity ratio of under 100%; and cash holdings at least equal to short-term debt, according to information circulated online that Caixin has confirmed with sources.

Developers that do not overstep any of the three red lines will be able to increase their annual interest-bearing liabilities by up to 15%, while those that cross one or two red lines are allowed an increase of 10% and 5%, respectively. Companies that step over all three red lines will be banned from taking on more debt, according to information made public that Caixin has confirmed with sources.

Executives from the 12 companies who attended the Aug. 20 meeting were notified verbally that they had been selected for the pilot and gave their feedback, according to one source who was present. The documentation detailing the trial was handed out to the executives at the end of the meeting. However, no details have been disclosed yet on how the policy will be implemented.

China’s government started a crackdown on real estate speculation about four years ago after prices of residential property surged, raising concerns a bubble was building that could exacerbate risks in the financial system. Policymakers have repeatedly stressed that “houses are for living, not for speculation,” but although property was one of the few sectors not to benefit from post-coronavirus stimulus policies, the market is growing red hot again in many parts of the country.

The new borrowing directive is the latest attempt to exert control over real estate financing, a policy that’s been in effect with varying degrees of severity and success over the past few years. Regulators issued a slew of measures last year to curb excessive borrowing by property developers — the banking and insurance regulator instructed banks to carefully screen developers’ qualifications when issuing loans and restrained trust companies from providing new financing to real estate companies.

One of the biggest costs incurred by developers is the purchase of land-use rights from local governments to build new homes, and although transactions slumped this year due to the Covid-19 epidemic, business is picking up again as local authorities scramble to raise cash.

“This is a clear signal from the regulators, which could lead some real estate firms to slow down the pace of land acquisition,” one source at a major property developer said, adding that land cost is a big part of the real estate firms’ spending, and reducing the acquisition of land is one of the most effective measures to curb debt.

Country Garden, one of three developers to have already crossed one red line, has expanded rapidly over the past few years following a strategy of “high leverage, high liabilities, and high turnover.” Wu Bijun, chief financial officer and vice president of Country Garden, said at an Aug. 25 briefing that the company’s financial indicators are “in a good state” and that the new rule would not have a big impact on the management of the business.

While most executives have sounded a positive note in public, saying that the impact of the pilot will be manageable, one senior executive at a midsize Shenzhen property developer told Caixin that if and when the directive is rolled out across the industry, “it could lead to the death of a large number of small and midsize property developers.”

Shao Mingxiao, the CEO of Longfor Group Holdings Ltd., which is not involved in the trial, said at an Aug. 26 briefing that the main intention of the three red lines is to stabilize leverage, curb the growth of developers’ debt and stabilize the housing market. Shao said regulators want real estate developers’ financing to grow in an orderly manner and that the new measures will help to give them better oversight of companies.

Deng Haozhi, a real estate expert based in Guangzhou in South China, said that in effect the new policy puts a hard cap on the growth of real estate companies. It will solidify the positions of the top firms and put state-owned developers at an even greater advantage because they enjoy lower financing costs and are in general more cautious about adding leverage.

“Judging from the experience of the past few years, the financing costs of private enterprises are generally higher than those of state-owned enterprises (SOEs), while among SOEs, those administered by the central government have the lowest financing costs,” Deng said.