By Zheng Lichun, An Limin and Denise Jia 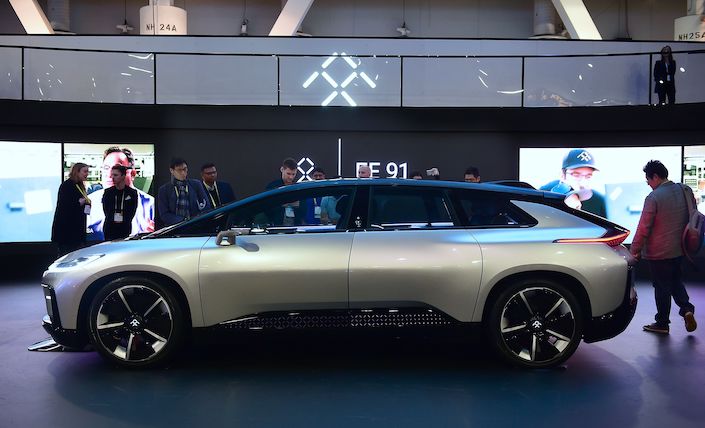 Shares of Faraday Future Intelligent Electric Inc. slumped 18% from their debut price Thursday on Nasdaq. The electric car startup of disgraced Chinese billionaire Jia Yueting started trading in New York after merging with a special purpose acquisition company (SPAC) that agreed to provide $1 billion of gross proceeds to the company.

The stock opened at $16.84, rose as high as $17 and later traded at $13.85. The long-struggling electric-car company made a deal in January for funding from Property Solutions Acquisition Corp., an American company formed for the purpose of buying other companies. Before the combination with Faraday Future, the SPAC’s shares closed Wednesday at $13.78.

The deal went ahead even though Faraday Future lost a cornerstone investor that pledged to invest $175 million. Caixin learned from several sources that it was the Zhuhai municipal government in South China’s Guangdong province that dropped out. The 17.5 million shares originally allocated to the investor were distributed to other investors, Faraday said without identifying them.

The funding may finally help get the EV startup off the ground. Since its founding in 2014, Faraday Future has been unable to raise enough money to mass produce its first electric car model, the FF91. At one time it planned to build a $1 billion factory in Nevada, but that plan fell through for lack of funding.

Jia is best known in China for founding the once-high flying tech company LeEco, known as Leshi in Chinese, which crashed to earth in 2017. Jia was officially listed as a debt defaulter by the Chinese government in late 2017 and filed for bankruptcy in 2019. He has also been sued by 11 individual investors alleging fraud. Jia is thought to have fled the wreckage in mid-2017 and spent most of the time since in the U.S. focusing on the EV company.

The cornerstone investor that dropped out of the SPAC deal, identified as the government of a first-tier Chinese city, failed to exchange its yuan funds to U.S. dollars as it couldn’t get regulatory approval from the State Administration of Foreign Exchange, Faraday Future said July 15 in a filing with Securities and Exchange Commission.

Faraday Future said in the filing that it’s still in talks with the city on the details of a previously signed memorandum of understanding.

Faraday Future also has said it planned to collaborate with a top-three Chinese private automaker. Caixin learned from sources that the automaker is Zhejiang Geely Holding Group Co. Ltd., the owner of Volvo. Faraday originally planned to set up a joint venture with Geely and the Zhuhai government to produce its first model. Under the deal, Zhuhai was to provide land and $175 million for the joint venture. With the exit of Zhuhai government, the future of that joint venture is unclear.