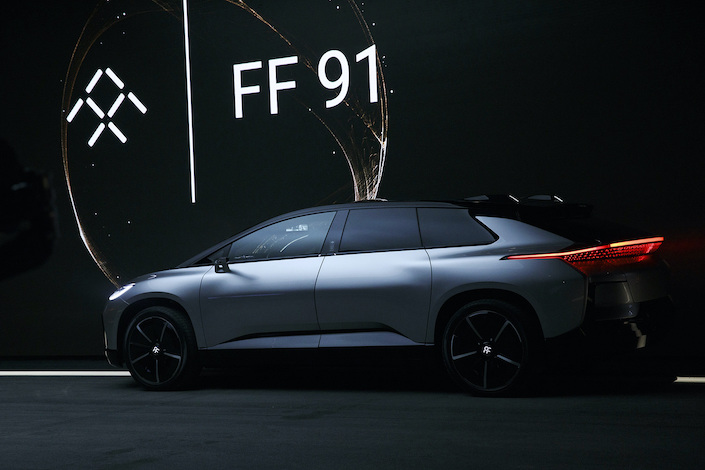 Faraday Future is in negotiations with Geely as a contract manufacturer to start mass producing its first model, the FF91, as quickly as possible.

The troubled EV startup said Thursday that it is merging with SPAC Property Solutions and expects to close the deal in the second quarter. About $230 million will come from cash held by Property Solutions, and Faraday will raise $775 million from cornerstone investors.

Faraday didn’t disclose the names of the cornerstone investors but said they include a “top-three” private Chinese carmaker and long-term institutional investors.

According to a roadshow presentation Caixin obtained, the Chinese carmaker is Zhejiang Geely Holding Group Co. Ltd., the owner of Volvo. Faraday is in negotiations with Geely as a contract manufacturer in an attempt to start mass-producing its first model as quickly as possible.

Faraday also disclosed that the cornerstone investors include the government of a “first-tier” Chinese city. The company said the city will provide land and $175 million for a joint venture set up by Faraday. The city is believed to be Zhuhai in South China’s Guangdong province. Chinese state-owned companies Zhuhai Gree Group and Zhuhai Huafa Group are considering investing in the SPAC deal, Chinese local press reported.

Faraday will keep its marketing, research and development in Zhuhai and place contract manufacturing elsewhere, a person familiar with the project told Caixin.

Since its founding in 2014, Faraday has been unable to raise enough money to mass produce the FF91, its first electric car model. The company previously said it would start mass production of the FF91 about nine months after closing a new round of funding.

In October, Faraday secured a bridge loan of $45 million to support volume production of the FF91 and development of the FF81, a move that came two weeks after Reuters reported that the carmaker was mulling a backdoor listing using a SPAC. The company said it obtained more 14,000 orders for the FF91.

Faraday’s scandal-dogged founder Jia Yueting is thought to have fled the wreckage of his previous tech venture in mid-2017 and spent most of the time since in the U.S. focusing on the EV-maker.

He remains best known in China for founding the once-high flying tech company LeEco, known as LeShi in Chinese, which dramatically crashed to earth in 2017.

Built from a predecessor founded in 2004 as a promising Netflix-like streaming service, Jia captivated the market with a breakneck expansion that spanned entertainment, smart TVs and devices, and even electric cars, and talked a big game about taking on Tesla Inc. and Apple Inc. But his ambition hit the wall as persistent cash crunches left the firm an array of debt disputes and lawsuits.

Read more
In Depth: How LeEco Fell From Glory

Chinese property giant Sunac China Holdings Ltd., which had attempted to rescue the indebted company, was forced to write off 16.6 billion yuan in losses from its investment in LeEco’s main listed arm in 2018.

Jia was officially listed as a debt defaulter by the Chinese government late in 2017 after a Beijing court ruled he had failed to repay about 480 million yuan to Ping An Securities.

His place on the country’s rogue-debtor list — he joined sister Jia Yuefang who served as his LeEco proxy in his absence — means Jia is banned from flying or taking trains within China, as well as from playing golf, staying in luxury hotels and buying real estate.

He declared bankruptcy in the U.S. in 2019. In a public letter last year he pledged to compensate LeEco shareholders.

By last year the firm’s market value had mostly evaporated, declining from 170 billion yuan at its peak to around 1 billion yuan.