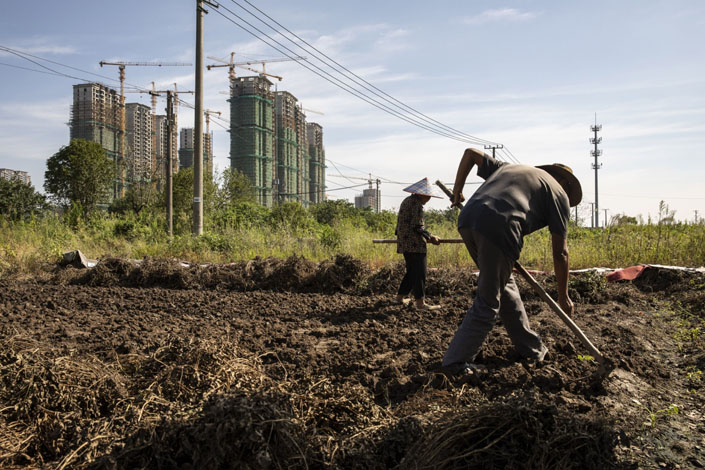 (Bloomberg) — China’s cash-strapped developers are becoming reluctant to bid for land during the nation’s property slump, threatening to undermine a $1 trillion revenue source for local governments and deepen the economic slowdown.

About 27% of land parcels offered by local governments went unsold in September as no developer submitted bids -- the highest rate since at least 2018, according to data compiled by China Real Estate Information Corp., which tracks auctions across 128 Chinese cities. Proceeds from land auctions across the country plunged 18% in August from a year earlier, the biggest decline in almost three years, Bloomberg calculations based on Ministry of Finance data show.

Faced with weakening funding access and rising borrowing costs amid the deepening crisis at China Evergrande Group, many developers have been refraining from replenishing their land holdings. In one sign of how tight financing has become, the industry’s borrowings from banks dropped 8.4% last month, the most since 2016, according to data compiled by Bloomberg.

“Developers are hoarding cash to avoid becoming the next Evergrande,” said Larry Hu, head of China economics at Macquarie Securities Ltd. “The contagion risk is real.”

Offshore borrowing costs for developers have soared in recent weeks as yields on Chinese high-yield dollar bonds, which are dominated by these issuers, climb to their highest in about a decade. That may shut down a key channel of funding for the sector, potentially prompting a wave of defaults.

As a result, land auction failures are on the rise across China. Beijing and the eastern metropolis of Hangzhou, home to the headquarters of Alibaba Group Holding Ltd., didn’t find any buyers for almost 60% of land parcels put up for sale this month. During the latest round of auctions held by local governments, three quarters of transacted parcels were sold at government-dictated base prices versus a premium of 45% before, Jefferies analysts said in a recent note, adding that the cool-down in the land market is faster than expected.

That doesn’t bode well for the world’s second-largest economy, which slowed in the third quarter as the property and construction sectors shrank. It’s also set to worsen the debt problem at local governments, which, according to E-house China Research and Development Institute, rely on land sales for about 40% their revenue. Municipalities are already facing revenue pressure from the flagging economy and struggling under a mountain of debts following years of investment binges.

In the past decade, there have only been two years when the Chinese government recorded a decline in income from land sales — 2012 and 2015 — and both were followed by periods of property stimulus.

Indeed, amid growing alarm that the liquidity crisis at Evergrande is spilling over to the entire economy, China is already making efforts to limit the fallout. The central government is loosening restrictions on home loans at some of its largest banks, telling them to accelerate approval of mortgages in the last quarter, Bloomberg reported this month.

China’s home sales by value tumbled 16.9% in September from a year earlier, following a 19.7% drop in August, National Bureau of Statistics data showed Monday. Existing-home sales, which are relatively free from government intervention, plunged 63% from a year earlier in the first 17 days of October, according to a Nomura Holdings Inc. note Monday. China is scheduled to report home price data for 70 major cities on Wednesday.

A few Chinese cities, including Kunming, Yueyang, Huizhou and Tangshan, have banned developers from resorting to price wars to drive sales, Chinese media reported. The northeastern city of Harbin will offer a home-purchasing subsidy of as much as 100,000 yuan for certain buyers and provide more affordable loans.

Jefferies analysts said selective second-tier cities may “fine-tune” some of the requirements that have been imposed on developers, such as rules on the source of funding, for their next batch of land sales.