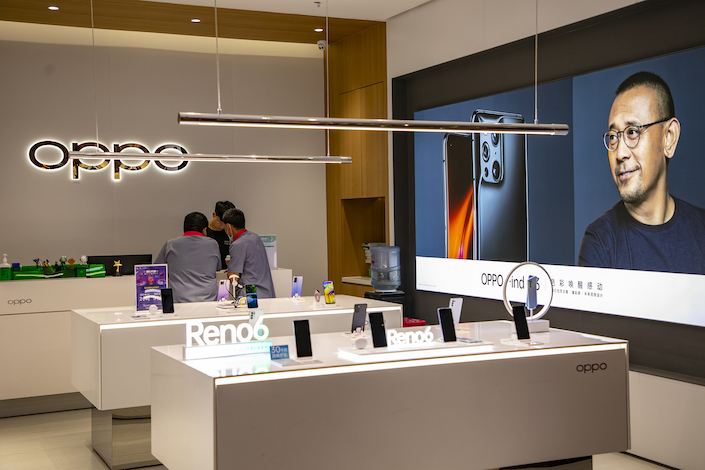 Oppo had 10% of global smartphone shipments in the third quarter, ranking fifth globally, according to market researcher Canalys.

Oppo will tap Taiwan Semiconductor Manufacturing Co. Ltd. (TSMC) for production and will use an advanced 3 nanometer (nm) design, Japan’s Nikkei newspaper reported Wednesday. The world's fourth-largest smartphone maker by shipments, Oppo plans to use its own mobile systems-on-a-chip in phones due out in 2023 or 2024, depending on the speed of development, Nikkei reported, citing people familiar with the matter.

Mobile phone manufacturers are rushing to develop their own chips to save costs and differentiate their products in competition. In-house chips can be about 50% cheaper than those supplied by Intel and Qualcomm. A chip investor told Caixin that Oppo is prepared to spend billions of yuan on chip development.

Oppo is China’s third-largest smartphone brand after Xiaomi and Vivo. Its 10% share of global smartphone shipments in the third quarter ranked fifth worldwide, according to market researcher Canalys.

The core members of Oppo’s new chip team come from existing mobile chipmakers such as Taiwanese semiconductor company Mediatek and have experience in developing chips using advanced processes, a semiconductor industry insider familiar with Oppo’s plan told Caixin. The timing of Oppo’s launch will depend on when TSMC can achieve mass production of its 3nm processors, the industry insider said.

TSMC said in June that 3nm processors were on target for mass production in the second half of 2022. The 3nm processors will offer 10%–15% speed improvements and will consume 25%–30% less power than 5nm chips. But TSMC recently delayed delivery of its first batch of 3nm chips until the first quarter of 2023.

Oppo’s plan to develop its own chips has been an open secret in the industry. In February 2020, the company announced its “Mariana Plan,” dedicated to self-developing integrated circuits. Since then, the company has been recruiting talent for its chip team and approached multiple engineers from Shanghai mobile phone chipset supplier UNISOC.

Liu Bo, head of Oppo’s China business, said in an interview in June that the company would step up chipmaking plans and work with chosen suppliers to co-develop its own custom-made chips.

Google launched its latest Pixel smartphones Tuesday, built with its own Tensor system-on-chip, a 5nm semiconductor that took four years of development.

Xiaomi has long been keen on making in-house chips. In 2014, it set up Beijing Pinecore Electronics as a unit to develop phone chips. It released a low-end chip, the Surge S1, for its budget Mi 5C phone in 2017, but since then its chip design efforts haven’t made much progress. Xiaomi’s phones still mainly use Qualcomm chips.

Vivo has also started to develop its own ISP chip. Huawei Technologies, once the world's largest smartphone maker, made its own Kirin chips before U.S. sanctions derailed its mobile business.