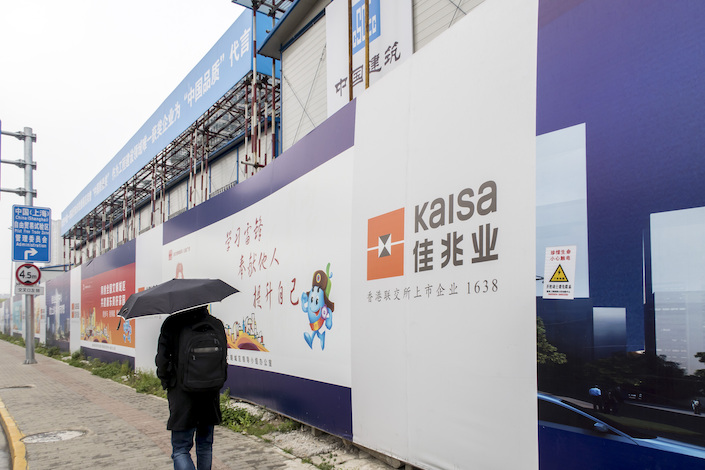 While Lau’s company accepted $18.3 million less than it paid for the securities, Chinese Estates said the sale provides immediate liquidity and allows it to reallocate the proceeds for other investments.

Lau, a long-time backer and poker buddy of embattled China Evergrande Group’s chief Hui Ka Yan, has also been absorbing huge losses by cutting his stake in Evergrande as the developer’s debt crisis escalated. China Estates said earlier this month it could lose HK$10.4 billion ($1.33 billion) if it sells all its shares in China Evergrande.

Market concerns have been mounting over Shenzhen-based developer Kaisa’s liquidity. The company’s debt plunged after it abruptly canceled a meeting with bond investors earlier this week, sparking fears of a potential default. One note due in December dropped 34% in three days. In 2015 the company was the first Chinese developer to default on U.S. dollar bonds

Chinese developers’ offshore bonds are generally under pressure as fears grow that the Evergrande debt crisis may trigger a wave of defaults. Yields on notes have surged to the highest level in a decade, making it harder for Chinese developers to borrow and further worsening their liquidity condition.

According to filings with the Hong Kong stock exchange, Chinese Estates sold three batches of U.S. dollar-dominated Kaisa bonds between Oct. 19 and 21 for a total of $37.9 million. Excluding interest, the bonds were priced at $33.7 million, a 35% discount from the $52 million that Chinese Estates paid for the bonds, according to the filings.

The Singapore-traded Kaisa debt issues include a seven-year bond maturing in June 2024, a 4.5-year bond due November 2025 and a perpetual bond issued in September 2020. The notes were rated B2 by Moody’s. Chinese Estates still holds some Kaisa bonds after the sales, according to company financial reports.

China Evergrande — the world’s most indebted developer with more than $300 billion in liabilities — missed five earlier offshore bond payments in late September and early October. That was followed by a surprise default by Fantasia Holdings Group Co. Ltd. and a missed payment by Sinic Holdings Group Co. Ltd. after a default warning. Evergrande has a further $573 million coming due before the end of the year.

Chinese Estates, a major shareholder of China Evergrande since 2017 with an investment of HK$13.6 billion, has been paring back its holdings in the troubled developer at huge losses.

On Oct. 6, Chinese Estates announced a privatization plan, offering to buy the 25% held by minority shareholders for HK$1.91 billion. The Lau family controls the remaining 75%.