Editorial: China Should Stick to Its Guns for Regulating the Housing Market 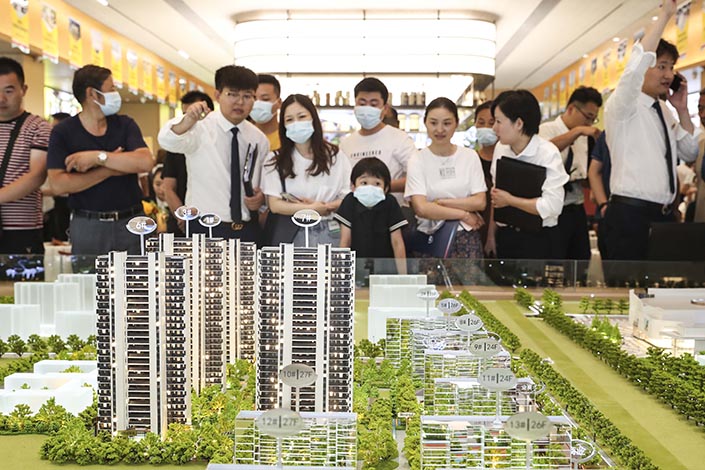 The principle of “houses are for living in, not for speculation” is facing more severe challenges than ever. In September, the number of Chinese cities with falling home prices hit the highest number in six years, and many land auctions failed to secure bids. Provinces heavily reliant on land sales for fiscal revenue and burdened with large debts could face financial pressure, while real estate companies such as Evergrande are facing liquidity crises. On the other hand, the country’s economic growth in the first three quarters has gradually declined. In the third quarter, China’s economic growth rate was 4.9%, down from 18.3% in the first quarter. Concerns are mounting over whether China will, or can, maintain the principle that “houses are for living in, not for speculation.” It is crucial for policymakers to stick to their regulatory policies in such a difficult time. We expect that governments on all levels will do whatever it takes to ensure this principle is met.

At the 2016 Central Economic Work Conference, it was clearly stated, for the first time, that “houses are for living in, not for speculation.” A year later, the report delivered at the 19th National Congress of the Communist Party reaffirmed that China would maintain this principle. In 2019, the Political Bureau of the CPC Central Committee put forward for the first time that “real estate shall not be used as a short-term means to stimulate the economy.” To date, this policy has been properly implemented.

However, at present, China is facing inadequate investment, weak consumption, a complicated external environment and substantial downward pressure on its economy. While many analysts believe that China’s regulatory actions in the real estate sector are unlikely to return to the old path, some expect that real estate could be used as a last resort to boost the economy once it cannot bear the burden — especially if local governments become financially constrained. Those who have continuously benefited from the housing boom are still hoping for this.

Due to changing regulatory requirements in the Chinese real estate market, expectations have become diverse. In the past, the government considered controls on real estate a critical countercyclical regulation method. Before 2016, the macroeconomic environment and controls on real estate complemented each other. In 1998, the State Council proposed to “speed up housing construction and use housing as a new enabler of economic growth” amid the Asian financial crisis and the three-year plan to reform the state-owned enterprises. After the SARS outbreak in 2003, the State Council issued the Notice of the Promotion of Stable and Healthy Development of the Real Estate Market, and real estate was regarded as “a pillar industry of the national economy.” In 2008, during the global financial crisis, the General Office of the State Council issued the Several Opinions on Promoting the Healthy Development of the Real Estate Market to boost the real estate market with a series of comprehensive measures, such as lax credits. Conversely, the government would take a multipronged approach, using regulations on land use, finance and taxation to control housing prices in an overheated economy. The two tasks — stimulating and restraining the economy — followed one another, therefore making up policy cycles.

However, these cycles have undergone fundamental changes since 2016. In recent years, the central government has tightened housing market policies, regulating the market on the demand side while urging continued efforts on the supply side. The central government has made great efforts to tackle the housing issue in big cities, proposing a series of measures such as increasing the supply of land and housing listing for sale and for rent at the same time. These dramatic changes were due to China’s industrial upgrading, which has shifted from being industry-oriented to service-oriented, leading China into a stage of high-quality development. The risk of high housing prices has become increasingly prominent. This has put residents under severe financial pressure and reduced their consumption, while enterprises are facing rising production and operating costs, which in the end will reduce the country’s overall competitiveness. Large amounts of money has been poured into real estate, distracting from its intended purpose of serving the real economy, and leading to a weak economy with a lot of financial risk exposures. China’s local governments have relied heavily on land sales revenue and used it to maintain a level of expenditure or to raise debt financing, a phenomenon intertwined with high housing prices that makes local governments vulnerable to fiscal risks.

Therefore, despite China’s severe economic slowdown, real estate should no longer be used as a short-term means to stimulate economic growth. Relying on real estate for growth will adversely affect high-quality growth while working against the steady, long-term development of the real estate market. It will also damage the credibility of government policies and undo everything that has been accomplished so far. Staying determined on “houses are for living in, not for speculation” is the only choice for policymakers.

Maintaining this principle does not mean letting things drift. Since the real estate market has a strong negative effect on the national economy, China must be very careful to protect its economy from systemic risks caused by the real estate sector and seek ways to avert an economic “hard landing.” Recently, Vice Premier Liu He pointed out that there are individual problems in the real estate market, but the risks are controllable with reasonable funding needs are being met. The overall trend of healthy development of the property market will not change. Yi Gang, governor of the People’s Bank of China, also said that Evergrande is an individual case, and that he is confident that authorities can contain risks posed to the Chinese economy and financial system. Obviously, policymakers have fully realized the risks inherent in the current real estate slump, and they will keep a good grasp of the pace of regulatory controls. And, of course, the statement that “reasonable funding needs are being met” is for the whole real estate sector, not for any individual company. More importantly, we must realize the fundamental difference between preventing risks to the real estate sector and using real estate as a short-term economic stimulus.

China’s real estate market has seen tremendous development, greatly improving the people’s living conditions and significantly increasing living space per person. However, housing issues are still very prominent with huge regional differentiation, especially in big cities where the middle class has difficulty affording houses while the low-income class finds it even harder. The proportion of industrial land is far above that of residential land in many cities, creating distortions in the land market and a mismatch between supply and demand in the long term. These problems have gone beyond the real estate market and are becoming more closely connected with social issues such as urbanization, regional development, public services, and fiscal and taxation systems. Relying on real estate to boost the economy cannot effectively address problems at the root of the systems. It will only disrupt the process of urbanization, making housing issues even worse.

Ultimately, the goal of “houses are for living in, not for speculation” is to meet the housing needs of citizens. It is essential to prevent unintended damage to people’s rigid housing demands. In some areas, people are having difficulties in obtaining loans. There are too many limits on house purchases for households without any property, and down-payment requirements for families who own one or more homes are too high. As the country improves the policies to ensure that cities take policies appropriate to their local conditions, local governments need to do just that, adjust the details according to the local circumstances. We need to resist the natural tendency to overcompensate in regulating the real estate market.

In the long run, to achieve the goal of “a place to live for all and home ownership for all,” it is still necessary to constantly improve the long-term mechanism for real estate and deepen reforms in related areas such as fiscal and taxation. China’s real estate sector is undergoing a difficult transformation. By staying determined on “houses are for living in, not for speculation,” government regulations and the housing marketing itself seem to be on the right track. Staying determined on regulatory policies is a way for policymakers to fulfill their promises to the public. Furthermore, in the long run, this will support the healthy growth of the Chinese economy and society.