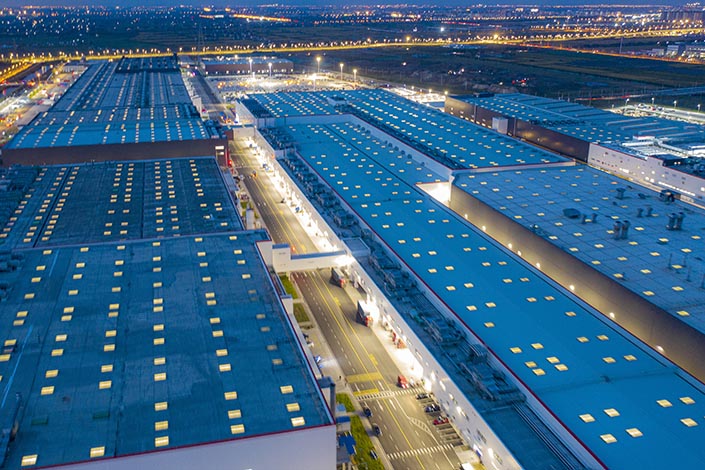 A view of Tesla’ super factory in the Lingang industrial zone in Shanghai on Friday. Photo: VCG

In the first three quarters of 2021, the U.S. electric carmaker’s Chinese domestic revenue ballooned 123% year-on-year to $9 billion, according to an SEC filing on Monday. That means China now makes up nearly a quarter of Tesla’s total revenue, compared with 19% in the same period of last year.

Also on Friday, the Elon Musk-helmed company said that it had set up an R&D center and a data center in Shanghai, where it assembles its popular Model 3 and Model Y cars.

Xpeng released the design for its sixth-generation electric vertical take-off and landing (eVTOL) vehicle, which it says will be capable of running on roads as well as flying at low altitude. But while the design may turn heads, analysts say its size and din could create turbulence.

That’s because compared with most eVTOL vehicles which have six or more rotors, Xpeng’s two-propeller model needs larger blades to provide enough lift and propulsion power. Some say the additional noise could make Xpeng’s cars a less attractive option.

Xpeng said the unnamed flying cars will retail for the bargain price of 1 million yuan ($156,700), and will start mass production by 2024.

Xiaomi Corp. remained India’s No. 1 smartphone seller in the third quarter despite suffering a shipment decline as the industry struggled with supply problems for low-end models. In the three months through September, Xiaomi shipped 11.2 million smartphones in India, down 14% year-on-year, giving it a market share of 24%, according to Canalys.

Canalys analyst Jash Shah attributed the success to Xiaomi push into the premium segment with the Mi 11 series, which partly offset its losses in the low-end segment.

The top five were:

In India, smartphone-makers shipped a total of 47.5 million devices from July to September, a decrease of 5% compared with the same period of last year, Canalys said.

The U.S. government issued $100 billion worth of export permits to suppliers of China’s Huawei Technologies Co. Ltd. and Semiconductor Manufacturing International Corp. (SMIC) — both on the U.S. trade blacklist — from November 2020 to April 2021, a Reuters investigation found, illustrating the interdependence of the world’s two largest economies.

During that period, the U.S. Department of Commerce granted 113 export licenses worth $61 billion that allowed suppliers to sell to Huawei and 188 licenses valued at $42 billion for suppliers of SMIC, according to the documents Reuters said were provided by House Republicans on the foreign affairs committee.

Autonomous truck startup Plus, which splits its operations between China, the U.S. and Europe, and JD Technology, the fintech unit of Chinese e-commerce giant JD.com Inc., have signed a framework agreement to team up on self-driving logistics technology.

As part of the deal, the two partners will also work together on the development of a vehicle-to-everything (V2X) communication technology which can help self-driving vehicles interact with things like smart traffic lights.