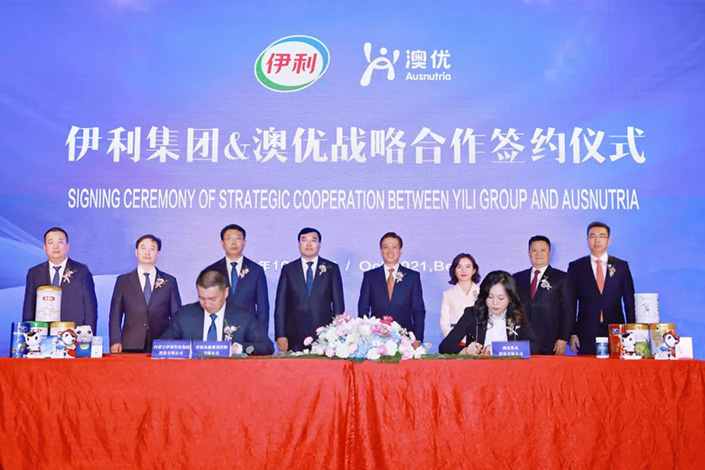 The signing ceremony of strategic cooperation between Yili group and Ausnutria held in Beijing. Photo: Yili

According to an exchange filing on Wednesday, Yili has signed deals with a group of Ausnutria shareholders — including Citic Agricultural Industry Fund Management Co. Ltd. and Dutch Dairy Investments HK Ltd. — to pay HK$6.25 billion ($803.56 million) for their combined 531 million shares in the company via its wholly owned subsidiary Hong Kong Jingang Trade Holding Co. Ltd.

Shanghai-listed Yili will also buy an additional new 90 million shares in Ausnutria via Jingang, the filing added, saying that the share acquisition deals will make Yili the biggest shareholder in Ausnutria. Those shares will be sold for HK$10.06 each, representing a premium of 33% on Ausnutria’s average closing price during the 30 days before it suspended trading in Hong Kong on Oct. 12, the filing said.

The deal awaits approval from Ausnutria’s shareholders as well as Chinese regulators.

Yili’s decision to buy a stake in Ausnutria largely stems from its goal of expanding into the goat milk powder business, one Yili insider told Caixin on condition of anonymity.

Ausnutria’s goat milk powder products under its imported Kabrita brand accounted for more than 60% of China’s imported goat milk-based infant formula market for three consecutive years from 2018 to 2020, according to research firm Neilson.

This overwhelming advantage could inject impetus into Yili’s efforts to expand in milk powder generally, at a time when it generates 80% of its revenues from selling liquid milk products. Yili said that it saw a year-on-year increase of 20% in sales of its milk powder products in the first half of 2021, without providing specifics.

According to a Hong Kong Stock Exchange rule, obtaining a 30% stake will give Yili the right to propose the acquisition of the remaining stake in Ausnutria. But Yili said that it has no plan to take Ausnutria private and will let the company operate independently as a listed entity in Hong Kong.

Song Liang, a dairy industry analyst, told Caixin that taking full control of Ausnutria could help Yili become China’s second-largest milk powder vendor after Feihe. Song predicted that Yili could generate between 15 billion yuan ($2.3 billion) and 18 billion yuan from selling milk powder products this year if its financials are consolidated with those of Ausnutria, compared with Feihe which was expected to generate about 25 billion yuan from the segment. The merger would also likely buoy their shares, Song said.

Ausnutria, founded in 2003, sells products in China, North America, the Middle East and parts of Europe, according to its website. Its products include infant formula based on goat milk and organic cow milk made under the Kabrita and Nolan brands.