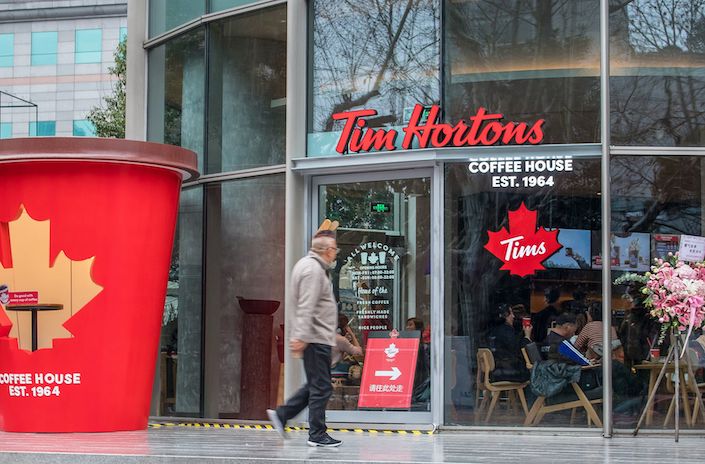 (Bloomberg) — The iconic Canadian coffee and donut chain Tim Hortons is on a tear in China, more than doubling its store count this year in a blistering expansion that if sustained would outpace the initial trajectory of Starbucks Corp.

TH International Ltd., also known as Tims China, a joint venture of Restaurant Brands International Inc. and the private equity firm Cartesian Capital Group, said it opened its 300th store in the world’s most populous country. The more than two-fold jump — it had 137 outlets at the beginning of 2021 — underscores the coffee chain’s big bet on China despite recurring flare-ups of Covid-19 that have curtailed consumer demand and triggered curbs on movement.

The rapid expansion is a prelude to taking the Chinese operations public through a merger of Tims China with the blank-check company Silver Crest Acquisition Corp. The deal is likely to close in the first quarter of 2022, said Peter Yu, chairman of Tims China.

That’s a slight delay from the original timeline announced in August, when officials said the deal that would provide capital for expansion would close by the end of 2021. Tims China still plans to expand the number of stores 800% by 2026.

“It sounds like an ambitious goal, but it’s really quite manageable,” Yu said Tuesday in an interview. “The Chinese market is absolutely a compelling market. In the area of coffee, it’s also the fastest-growing market in the world, and so we see plenty of room to reach that stated target.”

That plan will set Tims China — which counts Tencent Holdings Ltd. and Sequoia Capital China as investors — on a faster expansion ramp than Starbucks. The Seattle-based coffee chain reached 2,000 locations in China about 17 years after it introduced the lifestyle of coffee drinking in 1999. Starbucks has also accelerated its pace of openings amid fierce competition from local coffee upstarts like Luckin Coffee Inc. and now runs 5,100 stores in China.

Coffee consumption will grow at a 10% annual clip in China over the next five years as demand balloons among young professionals and in urban areas, according to Mordor Intelligence market research.

China may provide a boost for the brand as work-from-home programs tied to Covid-19 cut into morning sales in North America. Restaurant Brands — which also owns Burger King and Popeyes — set up the first Tim Hortons in Shanghai in 2019 in the wake of trade war escalations between U.S. and China.

The company’s same-store sales grew more than 20% in the first nine months of 2021, Yu said. The current high levels of growth suggest there is room for future expansion, though he said he expects the numbers will gradually slow to high single digits.

The new stores will be concentrated in and around Beijing, Shenzhen, Shanghai, Chengdu and Chongqing. The clustering will help increase density of the operations, improve convenience for customers and enhance supply chain efficiency, Yu said.

In China, Tims isn’t just the donuts and lattes that made the company famous. Local dishes, including spicy beef wraps and salted egg yolk timbits, are also on the menu.