Another Chinese Developer Is Sinking as Junk Bonds Sell Off 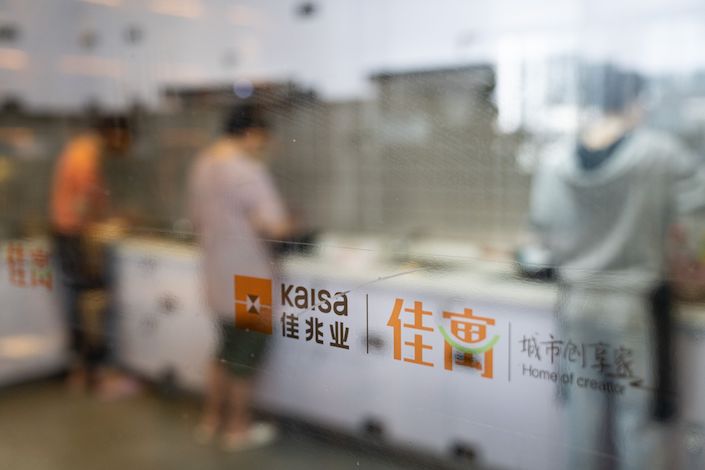 The company’s 6.5% bond due Dec. 7 fell 5.9 cents to 52.1 cents on the dollar, poised for a record low, amid a broad selloff in debt issued by Chinese developers.

The enterprise is the latest to come under pressure as a spike in borrowing costs crushes property companies with the worst balance sheets. Spreads on Chinese high-yield debt over comparable Treasuries have widened to near record levels after a brief respite last week, making refinancing coming maturities prohibitively expensive. At least four Chinese developers have defaulted in October.

S&P Global Ratings and Fitch Ratings cut Shenzhen-based Kaisa by two notches on to CCC+ from B Wednesday, following a Moody’s Investors Service downgrade last week. China Evergrande Group, which has the largest liabilities of any property business worldwide at about $300 billion, is supposed to pay an overdue coupon Friday.

Kaisa has a $400 million note due Dec. 7 and $2.8 billion of dollar bonds maturing in 2022, according to data compiled by Bloomberg. That’s on top of about $1.1 billion of interest payments for next year. While Evergrande hasn’t tapped the dollar bond market since early last year, Kaisa sold $2.4 billion of notes in 2021.

“The negative outlook reflects Kaisa’s sizable and concentrated offshore bond maturities over the next 12 months and the company’s diminishing liquidity,” S&P analysts including Aeon Liang wrote in a report dated Wednesday. “We view the company’s capital structure as unsustainable amid challenging operating conditions and a tight funding environment.”

Billionaire Joseph Lau’s Chinese Estates Holdings Ltd. sold Kaisa bonds at a loss on at least three occasions in October as the investment company reduces exposure to embattled Chinese developers. Chinese Estates, which was also a major shareholder of Evergrande before paring its stake, is set to be taken private by the Lau family.

The renewed sell-off comes after Chinese regulators told developers they need to meet all their debt obligations including offshore bond payments. Fantasia Holdings Group Co. shocked investors this month when it failed to repay a $205.7 million bond, despite previously signaling that it had sufficient working capital and no liquidity issues.

Kaisa will need sell assets to help avoid default, although such sales may not be completed in time to cover bond maturities, S&P analysts wrote. The company will need to manage a further $2.2 billion–$3 billion of offshore maturities a year over 2023–25, according to S&P.

Fitch attributed the downgrade to Kaisa’s “limited” funding access and uncertainty over the refinancing of dollar bonds given volatility in capital markets, according to analysts including Edwin Fan.

Kaisa is notable for being the first Chinese developer to default on a dollar bond, back in 2015, before undergoing debt restructuring the following year. Its bonds and shares fell earlier this month after the company canceled meetings with some investors.