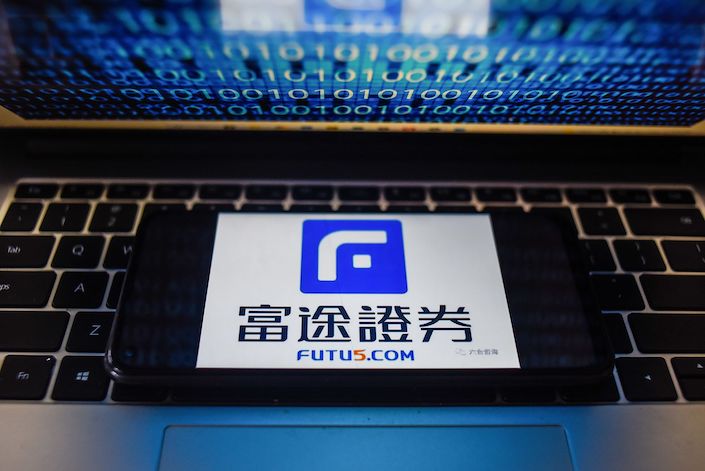 (Bloomberg) — China’s largest cross-border brokers plummeted in the U.S. Thursday after a central bank official questioned the legitimacy of their operations amid Beijing’s continuing crackdown on financial risks.

The online brokers are engaged in “illegal financial activities” because they have no “driving licenses” to operate in China, Sun Tianqi, a senior People’s Bank of China official wrote in an article (link in Chinese) published Wednesday on the website of the Finance 40 Forum. Sun didn’t name the brokers and said calling them illegal has nothing to do China’s capital control rules.

Tencent Holdings Ltd.-backed Futu Holdings Ltd. tumbled in premarket trading Thursday and closed down 13%, while Xiaomi Corp.-backed Up Fintech Holding Ltd., known as Tiger Brokers, closed down 17%. Both stocks had soared since the companies went public in New York in 2019.

China has been tightening controls over broad swathes of its economy, in particular cracking down on misconduct of businesses that collect data from consumers such as ride-hailing apps and other technology giants. Futu and Up Fintech have been operating in a gray area, allowing millions of Chinese mainland investors to evade capital controls to trade shares in markets such as Hong Kong and New York.

The companies are able to do so without approval from China’s securities regulator because their brokerage businesses are operated through subsidiaries based and licensed overseas, and their mainland-based subsidiaries mainly offer technology support and research.

For example, Futu’s securities business is run through its wholly owned, Hong Kong-based subsidiary Futu Securities International (Hong Kong) Ltd., which has a license from the Securities and Futures Commission of Hong Kong to deal in securities.

Futu and Up Fintech also avoid regulatory oversight by not letting their customers trade in the yuan. Helping their mainland customers exchange currency could draw the ire of China’s foreign exchange regulator, so the brokerages leave the foreign exchange problem to their customers. Mainlanders are forbidden from using their annual foreign currency quota of $50,000 to buy offshore stocks, but some circumvent the rules by transferring their foreign currency to offshore bank accounts and then investing through platforms like Futu and Up Fintech, market insiders said.

In an analysis earlier this month, state-run newspaper People’s Daily said online brokerages operating across borders run the risk of violating data privacy rules. Futu and Up Fintech are in the spotlight as China’s personal information protection law takes effect Nov. 1. The paper said user data of both brokers are at risk of being compromised as they are required to provide information to the U.S. Securities and Exchange Commission.

Sun, citing media reports, said one company, registered in the Cayman Islands, received 80% of outstanding funds in client accounts from the Chinese mainland, while another Hong Kong-based company received 55%. He didn’t name the businesses.

This isn’t the first time Sun has criticized the legitimacy of cross-border activities. In an article he wrote for state-run China Forex in 2018, Sun said China’s regulators have not approved any institution to conduct foreign exchange margin trading in the domestic market and that any form of such activities is illegal.

Securities Times reported earlier this month that authorities are working on rules to regulate businesses of online brokerages, citing an unidentified person close to the regulator.

“Since Futu Securities became a licensed institution under the supervision of the Securities and Futures Commission of Hong Kong, the institution has been running well without any bad regulatory records,” Futu founder Leaf Li said Thursday in a statement.

Futu has raised more than HK$15 billion ($1.9 billion) in the past year. The proceeds are mostly going to support Futu Securities’ business operations, Li said. The capital is ample and there is no risk of bankruptcy, he said.

“Tiger Brokers has the same business model as other U.S., Hong Kong brokers,” Up Fintech said in a statement. “We strictly abide with regulations globally.”

Both Futu and Up Fintech soared since their debut more than two years ago. Up Fintech traded as high as $38.50, four times more than its offering price of $8 when it was taken public by banks including Citigroup Inc. and Deutsche Bank. Futu topped $200 after its $12 launch in a listing led by Goldman Sachs Group Inc., Credit Suisse Group AG and other banks.

Another Chinese online broker, Webull, is weighing a U.S. share sale that could raise $300 million to $400 million, people with knowledge of the matter said in June. The Changsha, Hunan-based company is working with Goldman Sachs to prepare for the IPO, which could take place as soon as this year, the people said at the time.