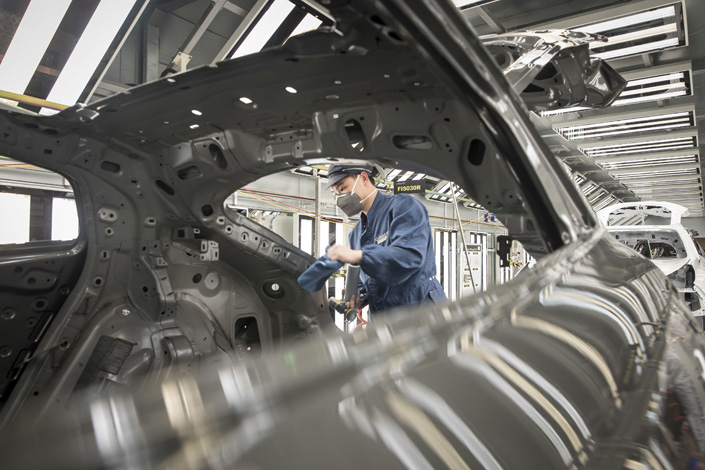 China’s official manufacturing purchasing managers’ index fell to 49.2 in October, the second month it was below the key 50-mark that signals a contraction in production. Bloomberg

The official manufacturing purchasing managers’ index fell to 49.2, the National Bureau of Statistics said Sunday, the second month it was below the key 50-mark that signals a contraction in production. The non-manufacturing gauge, which measures activity in the construction and services sectors, dropped to 52.4, below the consensus forecast.

The PMIs show the economy is under pressure from both the supply and demand side. Manufacturers are struggling with electricity shortages and rising costs, while consumer spending remains weak as the government’s Covid-zero approach means a tightening of restrictions around travel and social gatherings to contain frequent flare-ups of virus cases.

“Looking forward to November, the non-manufacturing PMI could drop significantly on the new wave of Covid-19 and China’s increasingly harsh zero-Covid policy, while the manufacturing PMI could remain weak due to shocks from both the supply and demand sides,” Ting Lu, chief China economist at Nomura Holdings Inc., wrote in a note.

Another worrying sign in the data was the pick-up in inflationary pressure in October. Both input and output prices for manufacturers jumped, suggesting producers are passing on higher costs to customers. Producer-price inflation is already at its highest level in almost 26 years.

“The jump of output price index in October is alarming,” Zhang Zhiwei, chief economist at Pinpoint Asset Management Ltd., said in a note. “This could lead to higher pressure on CPI inflation, and limit the space of monetary policy easing.”

The turmoil in the property market is another big drag on the economy. Housing sales have dropped, home prices are falling and the debt crisis at property developer China Evergrande Group is spilling over to the industry.

Economists have been gradually downgrading their growth forecasts for the fourth quarter and the full year as risks mount. The consensus is for growth of 3.5% this quarter, with Nomura saying there could be further cuts closer to its prediction of 3%.

Given the supply driven nature of the slowdown, the authorities are likely to continue an approach of modest and sector-specific growth support.

There could be further liquidity support -- we still see possibility of a another cut in the reserve requirement ratio by the year-end, on top of accommodation via open market operations.

A set of earliest available indicators tracked by Bloomberg also showed the economy remains under pressure.

The slowdown turns the focus back to the People’s Bank of China and whether it will take any action to spur growth. The central bank has refrained from cutting the reserve requirement ratio since a surprise reduction in July and has kept policy interest rates unchanged since early last year.

At the same time, it’s injected almost a trillion yuan of funds into the banking system in the past two weeks through open-market operations to cope with month-end demand for cash.

The NBS’s senior statistician, Zhao Qinghe, said in a statement that manufacturing demand and production both weakened in October. Smaller businesses, which are mostly in downstream sectors, face greater pressure, with the sub-index for these companies remaining below the 50 mark for a sixth month.

Consumers in general chose to spend the seven-day National Day public holiday in October at home or in nearby places due to virus and weather factors, according to Zhao.

On the plus side, exports have boomed, with recent South Korean trade data signaling ongoing strong global demand that’s helped to underpin manufacturing. The new export orders index increased to 46.6 from 46.2, gaining for the first time since March. The sub-index has been below 50 since May.

Trade conditions still need further monitoring as the recovery from the pandemic in major economies has slowed recently, Zhao said.

Other key highlights from the PMI data: