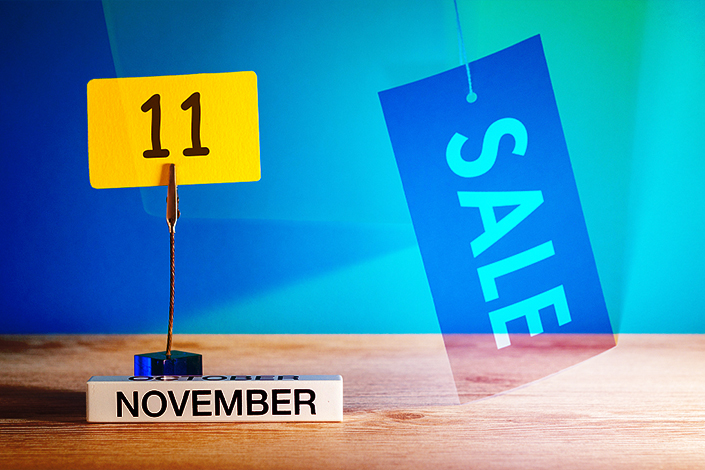 At 8 p.m. on Oct. 20, China’s annual online shopping extravaganza kicked off under the cloud of a prolonged anti-monopoly campaign that’s rattled the nation’s e-commerce giants.

As Beijing has launched a flurry of measures to stamp out anticompetitive behavior, markets and consumers alike are keen to see how the tougher environment will shape the spending spree this year.

As they try to stay on the right side of increasingly strident regulators, platforms are also relying on new marketing campaigns and social features as well as marathon livestreaming sessions to bolster sales amid intensifying competition from newer entrants.

The festival of consumerism was launched by Alibaba Group Holding Ltd. in 2009 and originally capitalized on an unofficial Nov. 11 holiday that celebrated singletons — the “11.11” date having the most “singles.”

It’s since expanded from one day to around three weeks, and from Alibaba’s Taobao and Tmall marketplaces to the whole sector.

China’s online retail sales are expected to rise to 17 trillion yuan by 2025, up 44% from 2020, according to a five-year plan (link in Chinese) released by the commerce ministry on Oct. 26.

Below are five ways that Double 11 is shaping up to be different this year.

In the past, Double 11 presales always began at midnight, with shoppers pulling all-nighters to place orders. This year, Tmall and JD.com’s presales began four hours earlier at 8 p.m. on Oct. 20.

Alibaba will continue the practice it debuted last year of Taobao and Tmall having two sales periods besides the presales period, one from Nov. 1 to 3 and the main event on Nov. 11. JD.com’s Double 11 sales will begin at 8 p.m. on Oct. 31 and a final “price-off” will take place starting at 8 p.m. on Nov. 10.

By extending the sale, e-commerce companies boost the value of goods sold on their platforms and ease the pressure on merchants and logistics networks.

According to JD.com, the number of customers who placed orders within the first four hours jumped nearly 40% compared with the first day of presales in 2020. The company also launched a “Shop Now” feature which delivers some goods from local merchants to customers within an hour.

On Nov. 1, JD.com said more than 190 million products were sold in the first four hours of the first sales window. As of 10 p.m. on Oct. 31, more than 1 million shoppers across the country had already received their packages.

Newer participants such as short-video operators ByteDance Ltd. and Kuaishou Technology have also kicked off shopping events on their popular platforms. ByteDance began presales on Douyin on Oct. 15 while Kuaishou kicked off presales for its Nov. 6 shopping festival on Oct. 20.

Both platforms focus on livestreaming e-commerce, in which streamers use the social connection and credibility they build with their audience to recommend products, often with discounts exclusive to the stream.

The hundreds of millions of daily visitors to short video platforms provide an ample pool of potential consumers. And the content recommendation algorithms used by the platforms to choose which videos their users see, combined with the influence of celebrity sellers, lead to healthy sales, according to Zhou Zhenghua, a senior researcher at Tencent Research Institute in an analysis (link in Chinese). Douyin hit 600 million daily active users in August 2020 and Kuaishou reached 293 million in the second quarter this year.

ByteDance promoted livestreamed e-commerce during Double 11 in 2019, but mainly functioned as an advertising portal for other platforms. It created its own e-commerce department in June 2020 and directly participated in last year’s shopping festival. Douyin, the domestic version of TikTok, recorded final sales of 18.7 billion yuan.

On Oct. 22, Kuaishou said first-day sales soared 272% from last year, with bigger discounts handed out to shoppers and heavier subsidies for merchants.

“Taobao must worry about Douyin’s rising e-commerce function; it is obvious that Douyin, as well as its rival Kuaishou, aims to rake in market share in the online shopping sector,” Lai Xingyu, an internet and e-commerce investment analyst who also works for video-streaming agency Weila, was quoted as saying in an S&P Global Market Intelligence report last November.

In response, Alibaba has been boosting its non-traditional advertising content, focusing on putting recommendations from influencers and other customers in front of shoppers prior to the shopping festival.

“Recommending before selling, rather than moving straight to the hard-sell period, is the core direction of this year’s Double 11 festival. This method provides consumers with more shopping inspiration, increases the exposure of products, and ultimately, boosts sales,” said Ashley Galina Dudarenok, a consumer analyst and long-time author on Chinese retail.

For example, Austin Li Jiaqi, one of the most popular e-commerce livestreamers on Taobao, has been adding explanatory videos during his livestream sessions in the run-up to Double 11 that purport to teach viewers how to select the best products. On Sept. 27, Li, also known as “lipstick brother,” launched the reality show “Amazing Offers” (所有女生的Offer) on Alibaba-owned video platform Youku, social media platform Weibo and video site Bilibili, unveiling how his team source products and cut deals with brands.

This range of techniques has paid dividends. On the first day of presales on Oct. 20, Li sold 12 billion yuan worth of goods during a 12-hour livestream session that attracted nearly 250 million views, according to Bloomberg citing data compiled by e-commerce data specialist Taosj.com.

Alibaba on Oct. 1 unveiled its “Zhongcao Machine” (种草机) on Taobao, a feature that allows shoppers to search through reviews from other users and then make purchases. Zhongcao, which translates to “planting grass,” has the connotation of planting the idea to purchase a product in a consumer’s mind through recommendations from influencers and friends.

Made-in-China products have been growing in popularity in recent years, with shining examples including the cosmetics and sportswear industry. They have also occasionally benefited from nationalistic backlashes against their foreign counterparts.

The industry also received support from the government, with the Ministry of Industry and Information Technology (MIIT) announcing on Aug. 25 (link in Chinese) that it will team up with other agencies to offer the cosmetics sector funding and innovation support.

Although foreign cosmetics brands still led in presale figures, domestic names Winona and Proya Cosmetics Co. Ltd. ranked No. 5 and No. 10 during the first two days of presale, according to a research note by Shanghai Shenyin Wangou Research & Consulting Co. Ltd., citing figures from ECdataway.

Winona achieved sales worth 700 million yuan in the first hour of presales, surpassing its record for the whole Double 11 period last year, the report said. QuadHA, a brand under Bloomage Biotechnology Corp. Ltd. (688363.SH), had single-days sales of 334 million yuan, making it the most popular of the 439 products Li Jiaqi pitched to his viewers on Oct. 20.

To capitalize on this trend, JD.com said it had planned to put an extra 700 million individual domestically made items on sale during the event.

“Leading domestic brands such as Anta, Li Ning and Xtep are empowering their products through technological advancement as well as upgrading and reshaping their brand image in the process. In the high-end competitive field, the gap between domestic products and international brands has been significantly narrowed,” said Han Yijia, analyst at China Industrial Securities.

In an update on Nov. 1 — the first day of official sales — Tmall said the performance of domestic brands was particularly good, with first hour sales figures of sports brands like Erke, MobiGarden and Warrior and home-appliance brands such as Tineco and Narwal surpassing their record for the entire day of Double 11 last year.

For years, it has been a common practice for China’s largest tech companies to block links from rivals on their apps. This “walled gardens” approach can protect a company’s own digital ecosystems, stymie competitors’ growth and discourage users from spending their cash elsewhere.

For example, links from Douyin and workplace tool Feishu shared to Tencent Holdings Ltd.’s ubiquitous WeChat cannot be opened smoothly, while links forwarded from Taobao and Tmall cannot be opened directly in the app. The practice, which Tencent said is based on security concerns, has led to user complaints and legal tussles.

The apparent death knell for this practice came recently, however.

On July 26, the MIIT said blocking external links is one of eight types of activities targeted in a six-month campaign to clean up the internet industry. On Aug. 17, the State Administration for Market Regulation issued draft guidelines to regulate anticompetitive practices in the industry, again barring malicious link blocking.

At a Sept. 13 press conference, MIIT General Director Zhao Zhiguo said the authorities will urge companies to “open up links to each other’s instant messaging platforms step by step,” saying that the practice interferes with users’ experience, harms their rights, and disrupts the market.

Two days later, the cybersecurity watchdog issued a set of guidelines requiring platforms to cooperate on data and traffic in accordance with national rules. Tencent, Alibaba and ByteDance all expressed support for a more open Chinese internet.

On Sept. 17, Tencent made the first move, allowing WeChat users to share external links including those of Alibaba’s platforms and Douyin in private chats.

At a press conference on Oct. 27, Alibaba Chief Marketing Officer Chris Tung confirmed that people could now use WeChat Pay to make purchases on some of the apps, including video site Youku, online ticketing platform Damai and food-delivery app Ele.me.

Other trends being promoted in this year’s Double 11 is public welfare and green consumption. These come as the government has called for efforts for “common prosperity” and various authorities roll out plans to meet the country’s ambitious carbon reduction goals.

On Tmall, 100 million yuan worth of green vouchers are being given out to incentivize consumers to buy energy-efficient appliances and products marked with a green certification. Meanwhile, Alibaba’s logistics arm will be introducing 60,000 package recycling points across 20 cities.

For its part, JD.com said it is reducing and recycling packaging, as well as making deliveries via electric vehicles.

Also, Alibaba is launching campaigns such as making a 1 yuan donation for social media posts mentioning its “Goods for Good” program, a philanthropy initiative launched in 2006 in which customers can donate cash while making purchases. Donations will be made toward senior citizens living alone, “left-behind children” of migrant workers and low-income workers.