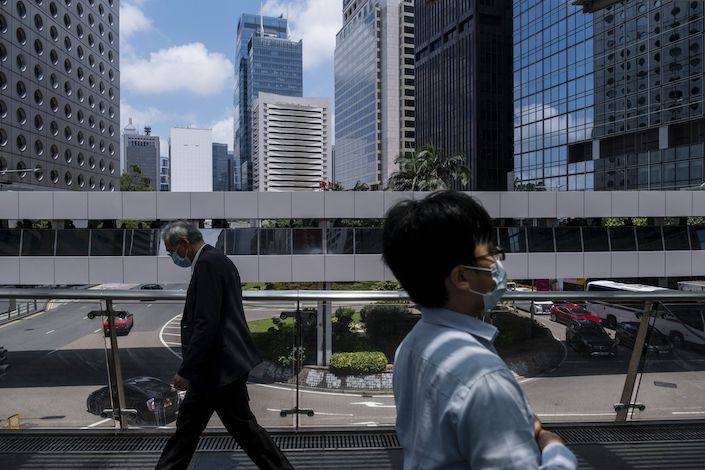 (Bloomberg) — Hong Kong will end quarantine exemptions for senior executives, bankers and most entitled groups starting Nov. 12, tightening what is already one of the world’s strictest Covid-19 policies as it works to open the border with the mainland.

Exemptions for directors of publicly traded companies and senior executives from the banking, insurance, securities and futures sectors will be canceled, Hong Kong’s government said. Consular and diplomatic officers will need to self-isolate at designated quarantine hotels, it said, with home isolation not allowed except for consuls general or representatives at an equivalent or higher level.

Only members of some essential groups linked to the city’s daily operations will get exemptions, including airline crews, sea crews working on cargo vessels, government officials and drivers of cross-border buses.

Hong Kong currently allows some people from a dozen industries to be exempted from compulsory quarantine measures that can last as long as three weeks. Foreign business chambers and business groups have expressed concern that the city will be left behind while other global financial hubs reopen as it and the Chinese mainland remain the final holdouts of a Covid Zero strategy of trying to stamp out all local transmission.

Hong Kong hasn’t had a local outbreak of the coronavirus since early June, and while it does typically report a handful of cases each day, most are imported infections detected in new arrivals. The city has fully inoculated just 59% of residents, according to Bloomberg’s Virus Tracker.

Regulators and the Hong Kong Monetary Authority Monday asked the city’s finance sector to encourage employees to get vaccinated as soon as possible, according to a separate statement. Staff should receive at least one dose by end of November or opt to go through Covid testing every two weeks, it said.

Hong Kong Chief Executive Carrie Lam hinted at the tightening in a briefing last week, saying Hong Kong would soon announce arrangements to remove exemptions allowing some people to skip hotel quarantine to improve the chance that China would allow easier cross-border travel. Reopening the border to the mainland is a top priority of Hong Kong’s government.

“The new measures will strengthen the prevention of importation of cases and tackle the threat posed by mutant strains,” a government spokesperson said in Monday’s statement. The move is meant “to foster favorable conditions for resuming cross-boundary travel with the mainland and cross-border travel in future.”

Hong Kong has already launched separate programs called Come2hk and Return2hk for returning residents and visitors traveling from the mainland without quarantine requirements. But the city hasn’t received a reciprocal agreement as it struggles to convince Beijing that its anti-Covid measures are strict enough.

The move to end most exemptions follows public outcry dating back to August, when officials allowed actress Nicole Kidman to skip quarantine to shoot a television series. At that time, the city was issuing about 40,000 exemptions monthly to arrivals at its airport, bridges and other ports of entry, according to the government.