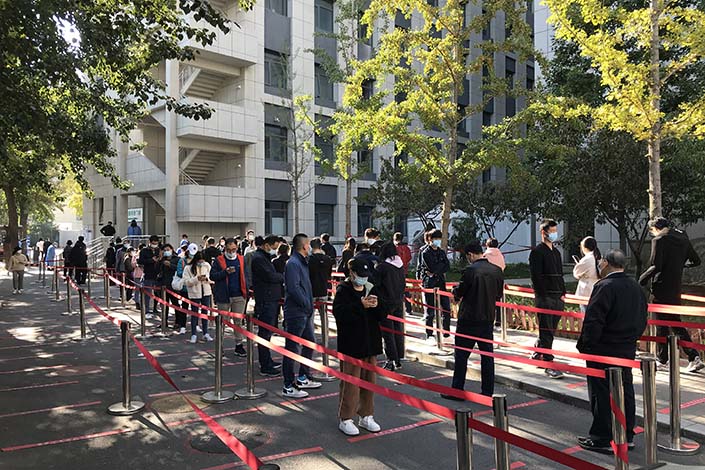 People line up to take nucleic acid tests in a hospital in Beijing’s Fengtai district on Saturday. Photo: VCG

Beijing has imposed entry restrictions on travelers from targeted regions with confirmed Covid-19 cases as local infections linked to trips to northern China continue to grow.

Since last week, more than a dozen cases have been found in the Chinese capital’s Changping, Haidian, and Fengtai districts, taking the national tally in the latest delta-driven outbreak to over 160, and forcing local authorities to tighten restrictions in certain neighborhoods and close some public venues.

Beijing now requires those who want to enter from counties with Covid-19 cases to present a negative Covid-19 test from the preceding two days and a “green code” that proves they have not been in risk areas over the past few weeks, he said. In addition, visitors should then expect a fortnight of health monitoring.

Pan said six people, including a pair in Beijing’s Changping district who recently visited Ejin Banner in North China’s Inner Mongolia Autonomous Region, are under criminal investigation for violating local epidemic control measures. After returning from the northern region, the two invited others to their home to play mahjong despite having developed a sore throat and fever.

Ejin Banner bordering Mongolia has kicked off a third round of mass testing, as some of China’s most recent cases were found to have links to tourist groups there, health authorities said. Several officials in Ejin Banner have been punished for their poor response to the local outbreak (link in Chinese) that has grown to include over 40 cases since Oct. 17, with Liu Qin, the local health commission’s deputy director, being removed from her post, according to a Saturday notice.

Beijing’s recent Covid-19 cases are all directly and indirectly linked to recent travel to Inner Mongolia, with most patients aged 55 and above, Pang Xinghuo, deputy director of Beijing’s disease control center, told a press conference Sunday.

The cases in Changping district have been determined by gene sequencing to share a source with those reported in Inner Mongolia and Gansu, authorities said, noting that the origin of the nation’s latest outbreak remains under investigation.

Also on Sunday, Wu Liangyou, deputy director of the National Health Commission disease control bureau, said at a press conference that the latest outbreak in China, which has spread to at least 11 provincial-level regions, was caused by a new foreign source of the highly contagious delta variant.

Wu said China’s current outbreak has developed fast, with a rise in local infections unrelated to travel groups, and warned that the number of new cases would continue to grow and spread to more areas in the next few days.

The country has largely brought its domestic Covid epidemic under control since adopting a “zero tolerance” policy early last year, although regional flare-ups of the globally prevalent delta variant continue to appear.

Several Chinese cities have offered booster shots to certain groups of adults amid the sporadic outbreaks. On Thursday, authorities in Beijing said the city has begun offering booster shots (link in Chinese) to adults who have been fully vaccinated for at least six months, four months before the city is to host the 2022 Winter Olympics.