Cover Story: How Should China Respond to the Delta Variant? 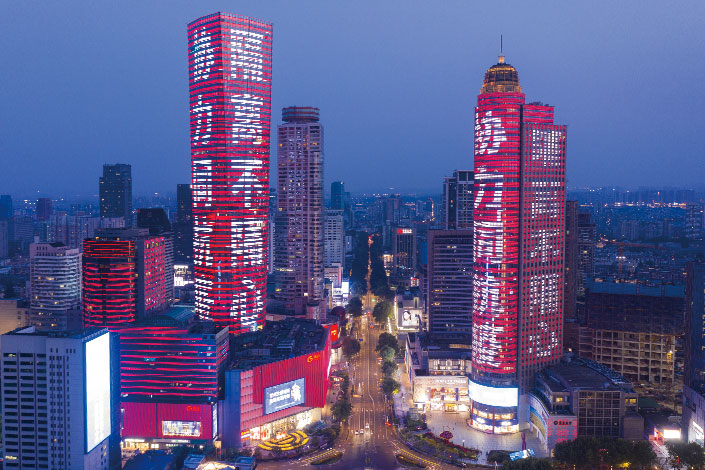 After largely controlling the Covid-19 pandemic for 20 months, China’s “zero-case” strategy is facing its biggest challenge yet: the highly transmissible and virulent delta variant.

As of Thursday, China had 533 new cases in 18 out of 31 provinces and province-level cities, all of them caused by the delta mutation of the coronavirus. The rapid spread makes China’s control measures more costly and is stirring debate over whether the government needs to recalibrate its strategy.

Even though the number of cases in China is still relatively low compared with the United States and elsewhere, the delta variant’s ability to infect vaccinated people and spread so much more rapidly raises the degree of difficulty for containing it. China needs a change of perspective on pandemic control, Zeng said. That includes a shift of focus away from eliminating the virus and infections entirely — as completely wiping out the coronavirus now appears impossible — and ordinary control measures should be adopted, he said.

So far, China is sticking with the zero-case target and is pouring huge resources into testing, tracing and quarantines. At a press conference Thursday of the Joint Prevention and Control Mechanism of the State Council, He Qinghua, an official from the National Health Commission, said China will continue adhering to the strategy to “prevent imported cases and domestic resurgence.” The measures are clear and concrete and have proved effective, he said. He argued that the outbreak can be largely controlled within a few weeks as long as local authorities strictly implement virus control measures.

Meanwhile, the rapid transmission of the delta variant means expanded requirements for rapid testing, raising the cost of disease control.

“If we miss the early tracing window, all we can do is to mass-test the whole city,” Cai said.

That was exactly what several cities in Guangdong province with a total of nearly 30 million residents did in the past two months after more than 100 cases appeared.

In this round of outbreak, cities including Nanjing, Zhangjiajie, Zhengzhou, Wuhan and Yangzhou all have carried out citywide testing. According to a guideline issued by the Joint Prevention and Control Mechanism, cities with a population of fewer than 5 million should complete nucleic acid testing within two days, while cities with more than 5 million should do so within three to five days.

Mass nucleic acid testing is expensive. Currently the test kit costs 5.38-12.16 yuan ($0.83-$1.88) per person, and the testing service costs about 80 yuan per person. That works out to at least 100 million yuan to test all 18.7 million residents of Guangzhou. To ensure greater accuracy, many cities conduct more than one round of testing. For example, the eastern city of Nanjing with 9.3 million people, where the latest outbreak started with more than 200 cases, did four rounds of testing in parts of the city within two weeks.

Some experts argue that mass testing is necessary to avoid prolonged lockdowns, which could magnify economic losses.

To protect the health and lives of people to the greatest extent, policymakers have to test as widely as possible to eliminate all risks that could further fuel the pandemic, said Wang Chenguang, a law professor at Tsinghua University.

Vaccines were seen as a promising weapon to end the pandemic, but now it appears that the delta variant can break through and infect vaccinated people, and those infected, vaccinated people can further infect others.

When the local outbreak first emerged at Nanjing Lukou International Airport where nine workers tested positive for Covid-19 in July, more than 90% of the airport employees had been vaccinated. In Ruili, a city in Southwest China’s Yunnan province on the border with Myanmar, where five cases were found in the most recent outbreak, nearly 97% of the population has been fully vaccinated.

China began mass Covid-19 vaccinations in December. More than 1.7 billion doses were administered in China as of Aug. 3, according to the National Health Commission. Antibodies in vaccinated people have declined below a key threshold around six months after the second dose, according to a study published last month by Jiangsu Provincial Center for Disease Control and Prevention, Fudan University and Chinese vaccine maker Sinovac Life Sciences Co. Ltd.

Global data shows that antibody levels in people who received Pfizer-BioNTech vaccines and other shots also declined over time, prompting some countries to provide booster shots.

Shao Yiming, a researcher at the China CDC, said China is considering using booster shots to strengthen immunity against Covid-19. Shao said the country was at an “extremely low risk” of developing a large-scale outbreak.

The Fudan study showed that a third shot of the vaccine produced by Sinovac resulted in significant increases in antibody levels, but it wasn’t clear whether a booster would be effective against variants.

China could first test booster shots on medical staff, suggested Cai, the Guangzhou No. 8 People’s Hospital infectious diseases expert. That group is generally young, and it would be easier to deal with adverse reactions and trace subsequent changes in antibody levels and infection rates, Cai said. If the effect is obvious, booster shots may be further expanded to the elderly, he said.

Several countries, including Israel, Russia, the United Arab Emirates and Bahrain, have started offering booster shots following surges in infections. But many nations, including the U.S., have held off on making a decision on supplementary injections given the lack of scientific consensus on whether they are necessary to maintain immunity.

The World Health Organization called on wealthy nations to stop the distribution of booster shots, citing vaccine inequality around the world.

Whether a country should give up a zero-case strategy and open its borders amid the pandemic does not depend only on its vaccination level but also on its medical capacity said Lu Mengji, a virologist at the University of Duisburg-Essen in Germany.

“Fighting a pandemic is to push down the epidemic curve to a level that medical capacity can withstand,” Lu said.

When the epidemic erupted in Wuhan, which already had a relatively high level of medical resources, the city experienced a medical “squeeze” and relied on support from the whole country. In the latest wave of the delta variant, cities such as Zhangjiajie and Yangzhou with weak medical resources, have to rely on aid from other provinces to treat patient surges.

China’s medical capacity and the medical resources gap across the country under pandemic pressure need to be more accurately measured, Lu said. Some medical resources should be reserved for non-Covid care, such as dialysis and heart attack patients.

The lack of intensive care unit (ICU) beds is a top concern. ICU beds in China’s general hospitals account for about 3% of total beds, far lower than 15% in the U.S. China has just 3.6 ICU beds per 100,000 population. In the U.S., the figure was 34.2 in 2015, according to a paper published by the National Center for Biotechnology Information. Germany has 29.2, according to a paper published in the Intensive Care Medicine journal based on 2012 data.

ICU beds in most of China’s hospitals are normally already full or even overloaded, making it difficult to respond to a public health emergency. In the Wuhan outbreak, more than 10% of the country’s ICU medical staff was dispatched to support the city’s fight against the pandemic, highlighting the shortage of reserve public health resources, a Chinese ICU expert said.

The biggest challenge China faces is the uneven distribution of medical resources. Large cities with more capacity are better able to treat Covid-19 patients, but in regions with weak medical resources, treatment capacity may not be sufficient, Lu said. However, China has gained experience in building makeshift hospitals. Equipped with oxygen ventilator equipment and professional staff trained in basic medical care services, such temparary hospitals can greatly mitigate the impact of new cases on the medical system, Lu said.

There is a growing belief that Covid-19 is likely to persist. Most virologists worldwide agree that this has become a resident virus and the world will have to learn to coexist with it. Thus, it is necessary to make a long-term plan for the rational allocation of medical and health resources, said Liu Guoen, director of Peking University’s China Center for Health Economic Research.

The unprecedented complexity of the pandemic is a wake-up call that people should have more respect for the forces of nature and should start to explore the optimization of long-term prevention and control in a more scientific, rational and systematic way, Liu said.

China has already provided a satisfactory answer in the first rounds of the pandemic fight, said Zhang Wenhong, director of the National Center of Infectious Diseases and director of the Infectious Diseases Department of Huashan Hospital, affiliated to Fudan University. China’s choice will be a coping approach that ensures a shared future for mankind, helps realize world connectivity and promotes a return to normal life while protecting citizens from the virus, Zhang said.