By Wang Lijun and Matthew Walsh 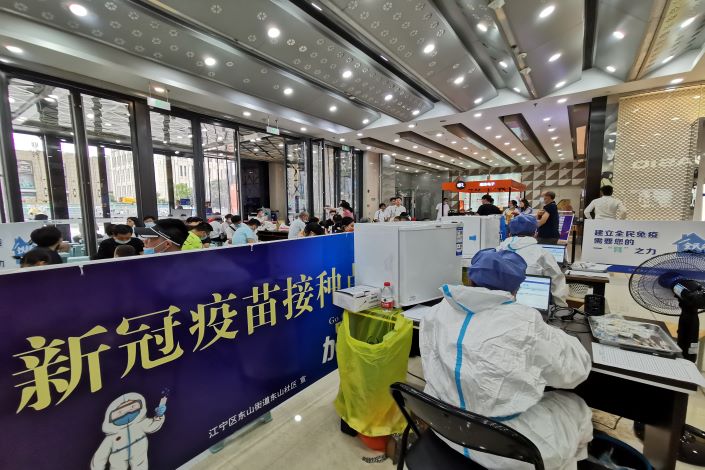 China’s vaccines are able to control the spread of new coronavirus strains, a top disease control official has said, as the Asian nation rushes to control its biggest Covid-19 outbreak since January.

Shao Yiming, a researcher at the Chinese Center for Disease Control and Prevention, said on Saturday that China’s relatively low numbers of new cases showed the country’s existing vaccination and disease control policies are effective at curbing the virus’s spread.

On Thursday, Shao said China was considering using booster shots to strengthen immunity against Covid-19, adding that the country was at an “extremely low risk” of developing a large-scale outbreak.

China has not disclosed details of its research into booster shots. Shao said on Thursday that it was “not surprising” that a new coronavirus strain, in this instance the highly transmissible delta variant, had caused a spate of new infections in the country.

Earlier this month, sources told Caixin that authorities plan to use an mRNA vaccine by Fosun Pharma and Germany’s BioNTech SE as a booster for people who have already received vaccines based on inactivated forms of the virus.

Several countries, including Russia, the United Arab Emirates and Bahrain, have started offering booster shots in the last two months following surges in infections. On Thursday, Israel’s Prime Minister Naftali Bennett said the country would begin offering a third dose of the Pfizer-BioNTech vaccine to people over 60 years old who have already been inoculated.

But many nations have held off making a decision on supplementary jabs given the lack of scientific consensus on whether they are necessary to maintain immunity.

China’s latest Covid-19 flare-up has largely centered on the eastern city of Nanjing, where authorities have launched a mass testing program and ordered tens of thousands of residents to stay at home. Officials said on Friday that the outbreak originated from a passenger flight from Russia.

Gene sequencing results showed that at least 52 people in the city have contracted the delta variant, Ding Jie, the deputy director of Nanjing’s disease control center, said at a press conference on Friday.

Many of the new cases are believed to be people who have been vaccinated. In an interview with a state-run newspaper published on July 23, Yang Yi, the head of critical care at Zhongda Hospital Southeast University, said the only unvaccinated person among the new infections was under 18 years old.

Nanjing confirmed six new locally transmitted Covid-19 infections on Saturday, seven fewer than the previous day, according to figures (link in Chinese) from the municipal health commission. The city has logged 190 cases since July 20, eight of which are serious.

Overall, China recorded 55 new Covid-19 infections on Saturday, 30 of which were locally transmitted, according to figures (link in Chinese) from the National Health Commission. There were nine more new local infections than the previous day.