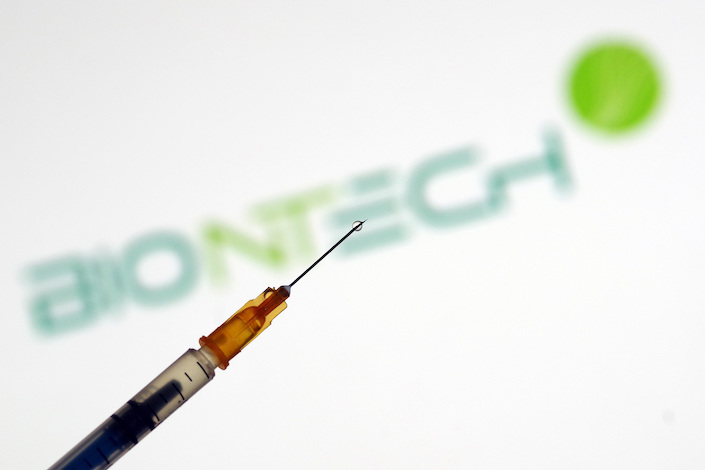 Fosun Pharma’s Shanghai joint venture with BioNTech will hit its annual production capacity of 1 billion doses of Covid-19 vaccine by the end of this year.

Chinese drug regulators completed an expert panel review of a Covid-19 mRNA vaccine co-developed by Fosun Pharma with Germany’s BioNTech SE, and now the shot is in the administration review stage, according to Fosun.

The Shanghai pharmaceutical company is sticking with its previously announced plan to start domestic trial production by the end of August, Fosun Chairman Wu Yifang said Wednesday at a shareholders’ meeting.

Chinese authorities plan to use the vaccine, with the brand name Comirnaty, as a booster shot for people who have received inactivated-virus forms of vaccines, people close to regulators told Caixin. The booster shot is likely offered free, the person said.

China administered more than 1.2 billion vaccine doses as of July 1, according to the National Health Commission. Most received inactivated-virus vaccines made by Sinovac and state-owned Sinopharm Group that have demonstrated lower efficacy than mRNA vaccines.

While awaiting regulatory clearance, Fosun Pharma and BioNTech started preparation and equipment procurement for their Shanghai joint venture. Construction of production lines in the Shanghai factory is set to be completed in August, Fosun said in June.

Fosun and BioNTech in May announced plans to set up the Shanghai facility to co-produce BioNTech’s mRNA vaccine Comirnaty, also known as BNT162b2. The venture is part of a broader partnership formed in early 2020 to bring the vaccine to China.

Wu said the Shanghai factory will hit its annual production capacity of 1 billion doses of Covid-19 vaccine by the end of this year. With the assistance of Fosun’s other facilities, monthly output can expand to 100 million to 200 million doses, Wu said.

Fosun sealed a deal to sell 10 million vaccine doses to Taiwan following months of on-again, off-again talks that finally reached a breakthrough after the island experienced a recent Covid-19 outbreak.

The University of Hong Kong is studying the effect of mixing shots of BioNTech’s Comirnaty and one made by Sinovac Life Sciences Co. Ltd. Fosun and the Chinese government are also conducting vaccine-mixing research. The currently available data suggest optimistic results, Wu said.