Four Things to Know About the New Covid Variants 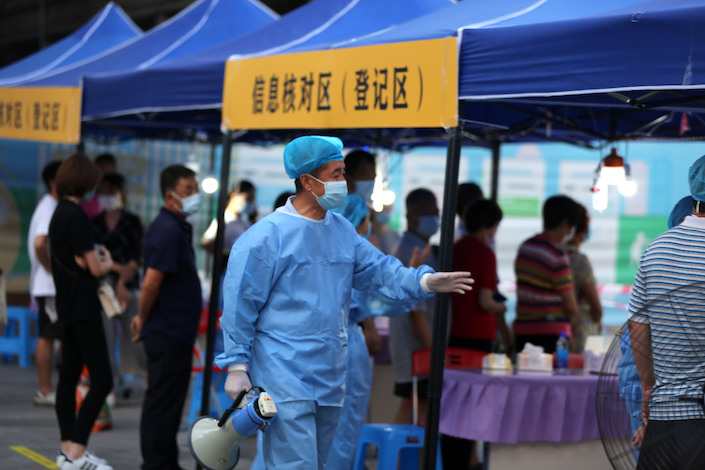 Since the city identified the first case May 21, Guangzhou has reported 98 confirmed infections in addition to 10 asymptomatic cases.

A year and a half into the Covid-19 pandemic, the virus behind the highly contagious disease has continued mutating to spread farther and faster, posing new challenges to global efforts to contain the pathogen.

Nearly 30,000 mutations have been recorded for SARS-CoV-2, the virus that causes Covid-19, according to a study published in February in the scientific journal Cell. That means the virus changes about 0.035 times each day, much faster than pathogens like the Hepatitis B virus.

Although most mutations either kill the virus or cause no significant change, a small proportion of them may alter its infectivity, disease severity or response to immunity. Several variants have emerged that showed alarming signs the virus is getting stronger.

As of May, the World Health Organization (WHO) listed four mutations as variants of concern because they showed an increase in transmissibility or virulence, or greater resistance to disease control measures. The variants include the Alpha variant first detected in the U.K., the Beta variant found in South Africa, the Gamma version from Brazil and the Delta mutation found in India.

The Delta variant, formerly known as B.1.617, is the most alarming yet as it involves multiple mutations that are likely to enhance the virus’s transmissibility, virulence and resistance to available vaccines and therapeutics.

According to a May report by the WHO, the Delta variant first detected in October in India has spread to more than 60 countries and regions. The rapid spread of Delta has raised fears that renewed outbreaks are threatening countries that have effectively quelled the virus, including Singapore, Malaysia and Vietnam.

In China, a country that largely recovered from the pandemic since last summer, a new wave of flare-ups in the southern metropolis Guangzhou is testing the city’s ability to contain the stronger virus. In less than three weeks, Guangzhou reported more than 100 Delta infections, the first time community transmission of the new variant was found in China. The city of 19 million has ramped up virus testing and imposed lockdowns on certain areas as the number of cases continues climbing.

What makes the Delta variant so alarming?

The Delta variant is spreading worldwide at a “frightening speed” and could aggravate the pandemic, said Teo Yik Ying, dean of the National University of Singapore’s Saw Swee Hock School of Public Health.

“It has the potential to unleash a bigger pandemic storm than the world has previously seen,” Ying said.

The recent flare-ups in Guangzhou shed light on the new variant’s high transmissibility. Since the city identified the first case May 21, Guangzhou has reported 98 confirmed infections in addition to 10 asymptomatic cases. All patients were infected with the Delta variant. The Guangzhou outbreak also spread to Foshan, a neighboring city of more than 7 million.

Contact tracing showed that some of the earliest cases in the Guangzhou outbreak didn’t have direct contact with each other, indicating the highly contagious nature of the variant. Many of them didn't suffer fever, cough or other symptoms even as their lungs showed infections in CT scans, making it more difficult to identify infections.

The new variant’s R0, which measures the number of people a sick person can infect, ranged between 5 and 6 when the outbreak started, compared with previous variants’ R0 of 2–3, according to Zhang Zhoubin, deputy head of the Guangzhou Center of Disease Control.

The mutations in the Delta variant may also make it more resistant to available vaccines and therapies, experts said.

Are current vaccines still effective against the new variants?

Scientists around the world are still studying existing vaccines’ effectiveness on new variants. Alarmingly, studies have found lower effectiveness against some variants.

A January study released before peer review found that the South African variant reduced neutralizing antibodies 8.6-fold for the Moderna vaccine and 6.5-fold for the Pfizer/BioNTech shot. The India variant could reduce the effectiveness of the two mRNA vaccines by sevenfold, a separate study showed. China’s inactivated vaccines also showed different degrees of decline in neutralizing antibodies against the new variants, studies found.

But experts said mass vaccination remains the most effective weapon to battle Covid-19, and existing shots are still protective against the virus.

Ding Sheng, a medical expert at Tsinghua University in Beijing, said that although the observed mutations had an impact on vaccines’ effectiveness, existing inoculations still work against the new variants.

The Pfizer and Moderna vaccines cover all existing variants and can provide a high degree of protection even with reduced effectiveness, said Jin Dongyan, a molecular virologist at the University of Hong Kong.

“Our vaccine was designed with greater tolerance of virus variants, and we are prepared to launch new research in response to major mutations,” said Zhang Yuntao, vice president of Sinopharm.

Global vaccine makers have been studying how to update their shots in response to the new variants, and some may adopt an extra booster shot. But experts said there is no need yet to make major changes in existing vaccines.

Will current virus testing fail to detect the new variants?

The U.S. Food and Drug Administration in January issued an alert that some current virus testing kits may be less sensitive in detecting the new variants. But several industry experts told Caixin that the mutations have only limited impacts on the sensitivity and accuracy of current virus testing methods.

The widely used nucleic acid test remains effective in detecting the virus no matter the variant, and there is no need to update testing kits, said Dong Xiaoping, a virologist at China’s CDC.

How do current virus control measures work to contain the new variants?

So far mutations haven’t changed the nature of the coronavirus, and the best way for individuals to protect themselves is to stick with measures including wearing masks, washing hands and keeping social distancing, experts said.

As the first epicenter of the pandemic, China has established a disease control toolkit consisting of mandatory quarantine of inbound travelers, contact tracing and regular nucleic acid testing for key groups of people and imported products. With effective implementation of the measures, there is little chance that the recent flare-up in Guangzhou, which is believed to have originated from imported sources, will turn into a mass outbreak, said Yang Zhanqiu, a professor at Wuhan University.

How the pandemic evolves will mainly depend on the global pace of vaccination, the mutations of the virus and the implementation of virus control measures, one disease control expert said.

Vaccination is crucial to controlling the virus as it slows transmission and reduces the chances of mutations, experts said.

The world is expected to partially resume travel, mainly among countries with high vaccination rates, as early as the second half this year, said Zhang Wenhong, director of the infectious diseases department at Huashan Hospital in Shanghai.

“China could see limited reopening of its borders in the first half of next year, but it depends on the pace of vaccination,” Zhang said.