By Zhai Shaohui and Cai Xuejiao 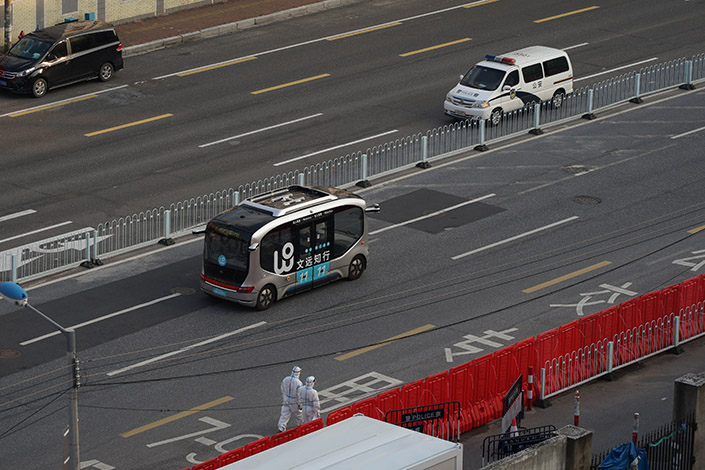 Unmanned vehicles drive into a high-risk area to ensure the distribution of residents’ supplies in the Fangcun area of ​​Liwan, Guangzhou, on June 5, 2021, . Photo: Chen Chuhong/China News Service,VCG

As the southern Chinese metropolis of Guangzhou works to control an outbreak of Covid-19, driverless vehicles have been deployed to help bring supplies to residents living under stay-at-home orders without risking delivery staff’s health.

Since last Thursday, communities in the downtown Liwan district, home to about 180,000 people, have been subject to these orders from the city government (link in Chinese). Since the first case in the latest outbreak was reported in the Guangdong province capital city on May 21, Guangzhou has reported 80 confirmed cases and 14 asymptomatic cases as of Saturday — mostly in Liwan.

The cases all involve a variant of the novel coronavirus first identified in India, which is more transmissible and has less obvious symptoms.

WeRide has supplied vehicles fitted with its autonomous driving technology to help bring daily necessities to the locked-down Liwan communities, ferrying items from checkpoints set up at the edge of the neighborhoods into residential compounds. Then local volunteers distribute the items to households.

Guangzhou-headquartered and Nissan-backed WeRide was founded in 2017. In 2019, it launched a trial self-driving taxi service in a designated section of city, and revealed plans to roll out a driverless minibus service last year. It has also been granted approval to carry out tests in California.

According to a member of WeRide staff, autonomous vehicles have an easier time navigating the unusually quiet streets of the locked-down areas, where other vehicles and pedestrians are scarce.

WeRide Vice President Zhong Hua said that due to the road conditions, the vehicles are able to operate without a human backup driver to ensure safety. The company’s driverless tech is classed as Level 4, which U.S. engineering standards group SAE International identifies as being able to drive a vehicle under limited conditions.

According to the local authorities, more than 10 tons of goods were delivered by the company’s vehicles on their first day of operations. Domestic media reported that a total of four WeRide-powered vehicles were involved in the deliveries.

Also, since early last week, a self-flying drone has been carrying biological samples from a public hospital in Guangzhou’s Haizhu district to a laboratory where they are tested for the coronavirus. The drone can make the trip in 10 minutes, far less than the time needed for the delivery by road, local media outlets reported.