By Wang Jing and Cai Xuejiao 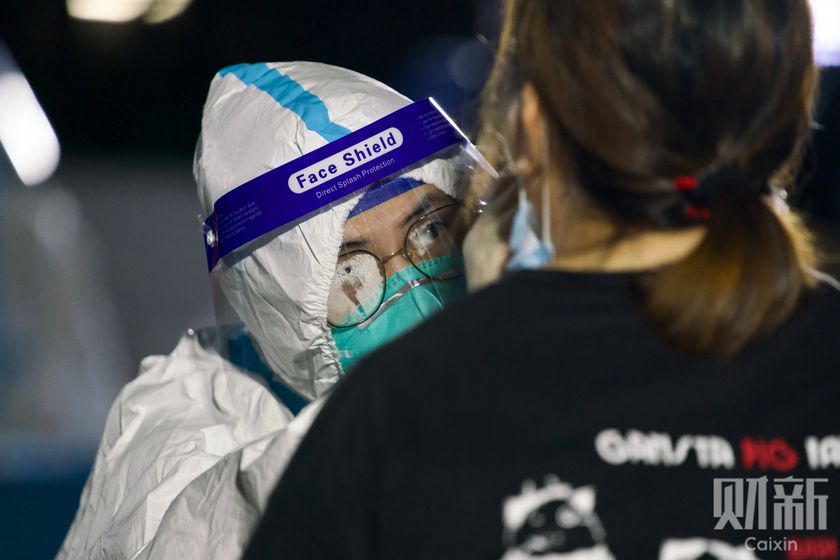 A medical worker conducts a test for a resident on Wednesday at the Huangsha Station testing site in Guangzhou. Photo: Caixin/Liang Yingfei

The Covid-19 cases in the recent flare-up in Guangzhou are more transmissible than cases found early in the pandemic, and more visible symptoms are taking longer to appear, according to a frontline doctor in the southern Chinese metropolis.

Cai Weiping, chief infectious disease specialist at Guangzhou Eighth People’s Hospital, which is handling the city’s Covid cases, told Caixin that the recent cases have a much higher viral load than those found in early 2020, which means it is passed more easily from person to person.

The local authorities have said that all cases in the city were found to be carrying a variant of the novel coronavirus first identified in India.

According to Cai, the order in which symptoms are appearing is also different from last year. He said that in the latest outbreak CT scans are finding inflammation in the lungs of patients who then develop fevers and coughs several days later. In the cases last year, Cai said, lung inflammation would usually appear about a week after patients begin to have a fever and cough.

Guangzhou identified the first case in the current outbreak on May 21 and has recorded 41 confirmed cases and 13 asymptomatic ones as of Tuesday. The source of the outbreak has not yet been identified.

On May 26, the city began mass nucleic acid testing and had collected 3.47 million samples as of Tuesday.

Cai said that nucleic acid test was particularly important in this outbreak, as measures used last year such as widespread, regular temperature monitors are “not working.”

At a press conference Monday, Li Ming, the city’s vice mayor announced (link in Chinese) suspension of individual COVID-19 vaccine appointments in the city to focus on mass testing of its residents.

On Tuesday, local authorities announced that 38 communities (link in Chinese) would be subject to stay-at-home orders. Guangzhou has designated two areas in its Liwan district as being “high-risk” (link in Chinese).

Shenzhen, which has recently had an outbreak linked to its Yantian port, reported two asymptomatic cases on Tuesday. The same day, three Covid-19 cases were reported in Guangzhou’s neighboring city of Foshan.