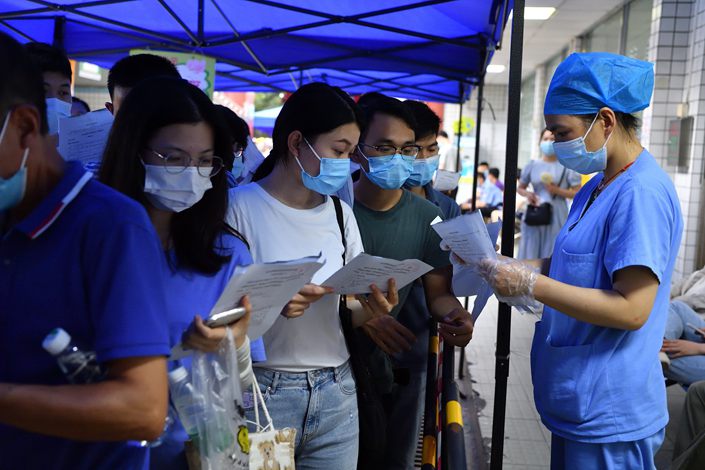 The southern Chinese metropolis of Guangzhou is rolling out travel restrictions and local lockdown measures as it battles a Covid-19 outbreak which has seen over two dozen people diagnosed with a highly transmissible variant first found in India.

From Monday night, people won’t be able to leave the capital of Guangdong province by rail, road or air unless they present a negative Covid-19 test from the preceding three days, according to a statement (link in Chinese) from local disease control authorities Sunday.

Travelers will also need to show that they’ve been given the all-clear by the local digital health code platform — which gathers location data and displays a warning if a person has visited areas deemed at risk for Covid-19.

The policy resulted in mass cancelations of flights into the city, with more than a third of arriving and departing flights canceled on Monday morning shortly before noon.

Imposing travel restrictions has been part of China’s anti-Covid playbook since early 2020, when all forms of travel from the city of Wuhan were severed. Similar, though usually less restrictive, measures have subsequently been imposed after several local outbreaks around the country.

Guangzhou has reported five local infections and 21 asymptomatic cases since May 21. Virus samples gathered from the patients show they are all carrying a variant first identified in India, said Chen Bin, deputy director of the city’s health commission.

A 75-year-old woman, who lives in the city’s Liwan district, was the first patient diagnosed in the latest flare-up. The source of the outbreak has not yet been identified.

Local authorities are racing to test people living in Liwan and the neighboring districts of Haizhu and Yuexiu. More than 2.2 million nucleic acid tests had been administered as of Saturday, returning 20 positive results.

Among the 20, a dozen were close contacts of people who tested positive earlier, with some found to have shared meals with the other patients.

“The main difference between this outbreak and previous ones has been the speed of transmission,” said Zhang Zhoubin, a deputy director of the Guangzhou disease control center. “The virus can be spread by eating a meal together.”

On Saturday, authorities issued a stay-at-home order for five Liwan communities. Only one person from each household can go out to buy necessities every day.

In these areas, all entertainment venues, sports venues, kindergartens and training institutions have been shuttered and schools will suspend in-person classes except those for students in grades nine and 12.

Guangdong on Sunday confirmed (link in Chinese) a total of 20 locally transmitted cases, with 18 in Guangzhou and two in neighboring Foshan. The province also reported three new asymptomatic cases, two from Shenzhen and one in Foshan.

Shenzhen has reported 13 asymptomatic cases amid its current flare-up. Eleven of them were confirmed to have contracted a variant first found in the U.K., local authorities said.

As the cases are asymptomatic and were mostly detected in the city’s Yantian port, there isn’t thought to be a high chance of community transmission, the authorities said, adding that the outbreak isn’t linked to the flare-up in Guangzhou.