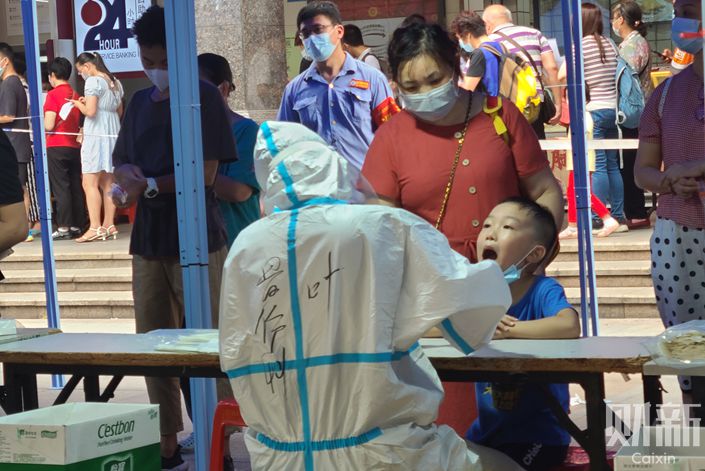 Residents of Guangzhou's Liwan district get tested for Covid-19 on May 25. Photo: Xiang Kai/Caixin

The southern province of Guangdong reported that four people were infected with the novel coronavirus Tuesday, including one confirmed Covid-19 case and three asymptomatic cases, bringing the total number in its latest flare-up to 11.

The newly confirmed patient was detected in Guangzhou, the provincial capital, where a 75-year-old woman surnamed Guo, who lives in the Liwan district, was confirmed Friday to have contracted a mutated strain of the coronavirus first found in India, according to the Guangdong health commission (link in Chinese).

In Guangzhou, three more asymptomatic cases were reported since Friday when the first case in the current flare-up was identified, local authorities said. However, it remains unclear how the virus spread from Liwan and whether the patients share the same chain of transmission.

Among the three asymptomatic patients reported in Guangdong Tuesday, two are from Shenzhen and one from Maoming.

The cases in Shenzhen are linked to the Yantian Port, local authorities said, including a port worker surnamed Zhang who had handled the cargo of a ship and a woman surnamed Wang whose husband works at the port. The city has reported seven asymptomatic cases since Friday, six of whom are workers at the port, with five having contracted a variant first found in the U.K., local authorities said.

All patients have been sent to local hospitals for medical observation, local authorities said.

On Friday, a 44-year-old port worker surnamed Mu tested positive for asymptomatic Covid-19 during a routine nucleic acid test in Shenzhen, becoming the first such case identified in the current flare-up in the city.

A day later, Chuang Shuk Kwan, head of the Communicable Disease Branch of the Centre for Health Protection in Hong Kong, told a press conference that the government would list Guangdong as a medium-risk area in response to the recent cases and said Hong Kong residents in Guangdong cannot return through the “Easy Return to Hong Kong” plan, which allows residents who have tested negative for Covid-19 to be exempt from quarantine upon arrival.

However, a spokesperson for the special administrative region said Saturday night that Guangdong was not classified as a medium-risk area and the arrangements for the plan remained unchanged so far.

As of Tuesday, Guangdong had reported 2,413 confirmed Covid-19 cases, including 1,015 imported cases. The Chinese mainland so far has recorded more than 91,000 Covid-19 cases, with the death toll standing at 4,636, according to the National Health Commission (link in Chinese).